The day had started reasonably enough, with a heavy shower followed by hot sunshine, and although the forecast was for more showers, after recent warm dry days it looked as though a good afternoon's riding lay ahead.
Turnout was a bit reduced at Nonsuch due to many being away in Dieppe, but several newcomers were there including some smaller children.  With a leader shortage, one ride was to go to East Molesey, and the other stay more local around Ewell, though dark clouds loomed over the horizon to the West.
The ten on the longer ride got no further than a couple of large trees in the park before heavy rain began to fall, but decided to see out the shower before resuming the ride. There were even the usual comments about it being good for gardens. The short sharp shower proved to be too optimistic a description and after 20 minutes a decision was made to abandon the ride and return to the cafe to wait for the rain to pass. Some had not even brought waterproofs and elected to abandon altogether as by now the air temperature had also fallen several degrees.
The short ride had not even started and some stragglers also went into the cafe, where hot drinks and cakes improved morale to the extent that it looked as though some sort of ride could be possible after all later on.  In due course the rain did ease off and the sky become lighter so I led a half dozen intrepid souls on a shorter ride to Horton Park.
When we got to the Hogsmill valley path near Hook the sky began to darken again and spots of rain become heavier and more persistent, so this ride hastily turned back by the Golf Centre. By now, such waterproofs as some people had, including mine, were proving inadequate, and in these conditions the only consolations were no wind to speak of and the end of the ride in sight. Still, we all finished and can say it was a learning experience about proper clothing and weather forecasting.  Tennis at Wimbledon was rained off until the evening, and true to form, as I reached my front door the rain stopped for the day and the sun came out.
There is always next weekend, which surely must produce better weather, for the start of the Tour de France.
Posted by Unknown at 07:21 1 comment:

Angie's ride to Charlwood on the 21st June

Saturday dawned bright and sunny, but when I arrived at the Mansion House only 4-5 people were there.
Then, low and behold, more intrepid cyclists arrived.  I say intrepid as I seem to have a reputation for cycling quickly!  In all, there were 16 of us.  It was a lovely ride out.  Up, up, up to Banstead, out to Walton on the Hill, when I made history by stopping for coffee by the pond.  We all whizzed down Pebble Hill and withOut further ado made our way via Irons Bottom to Norwood Hill.
During the descent to Charlwood, Maureen had a complete blow out of her back tyre and inner tube.  David patched it up and she made it to lunch after which Cliff called a taxi and they were taken to Crawley for a new tyre and inner tube and a train back to East Croydon.
On the way back towards Leatherhead, Bev was unwell and was revived with Lucozade Sport!  He kept suffering from terrible cramp.  We stopped for tea at Annie's in Leatherhead, then made our way home in dribs and drabs.
I hope everybody enjoyed their day.  I certainly did.  Thank you so much to Maureen and Harry for being such splendid back markers.  Thank you, Harry for helping out with Bev on the way back, and to David A. and others for helping out with the cycle repairs. Door to door I did 49.65 happy miles.  Angie x 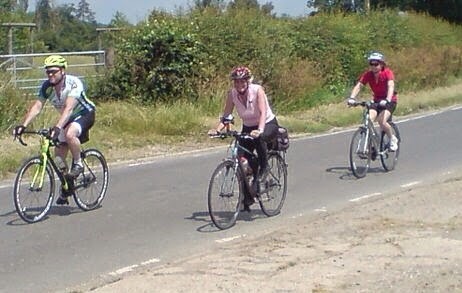 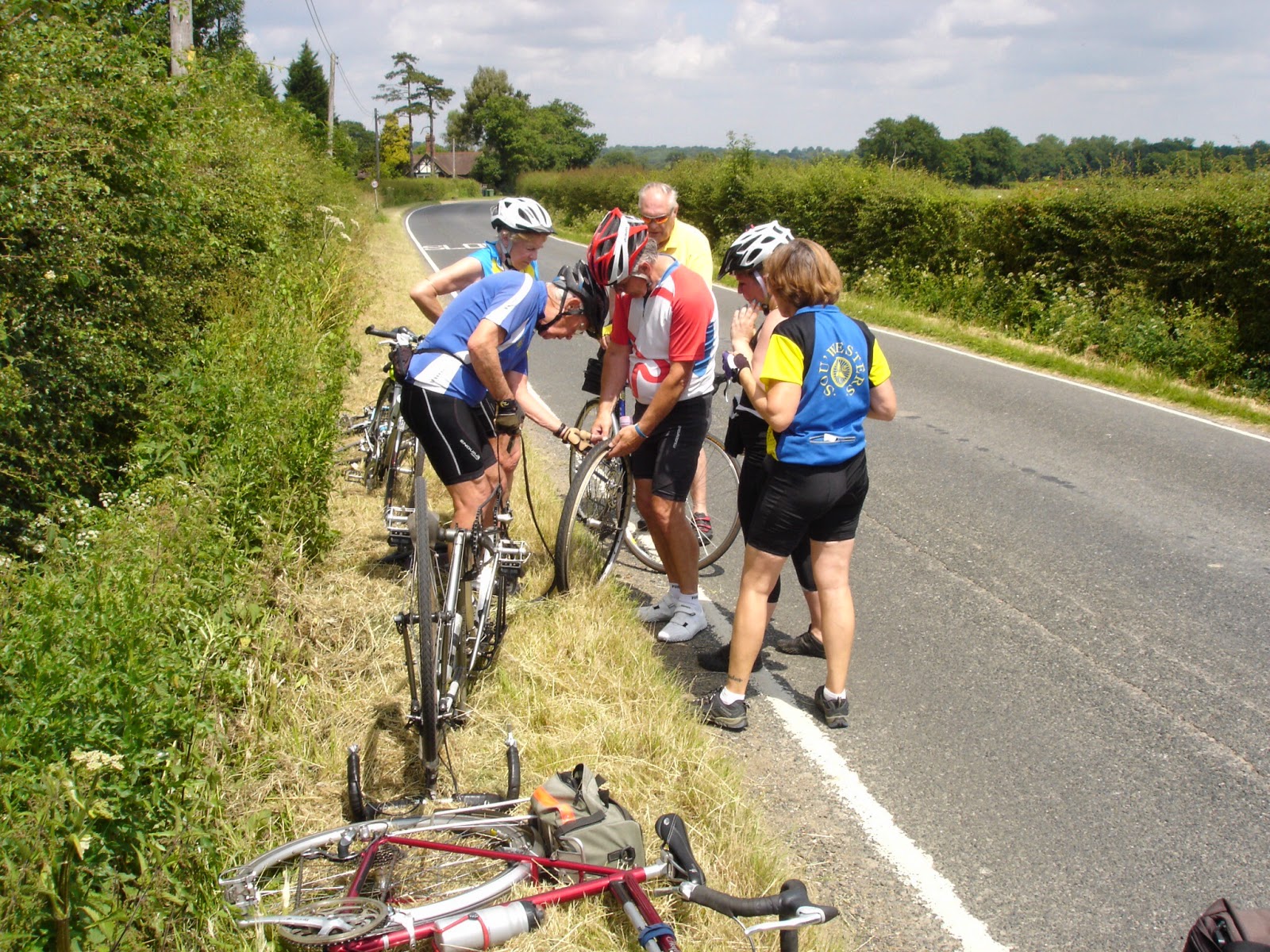 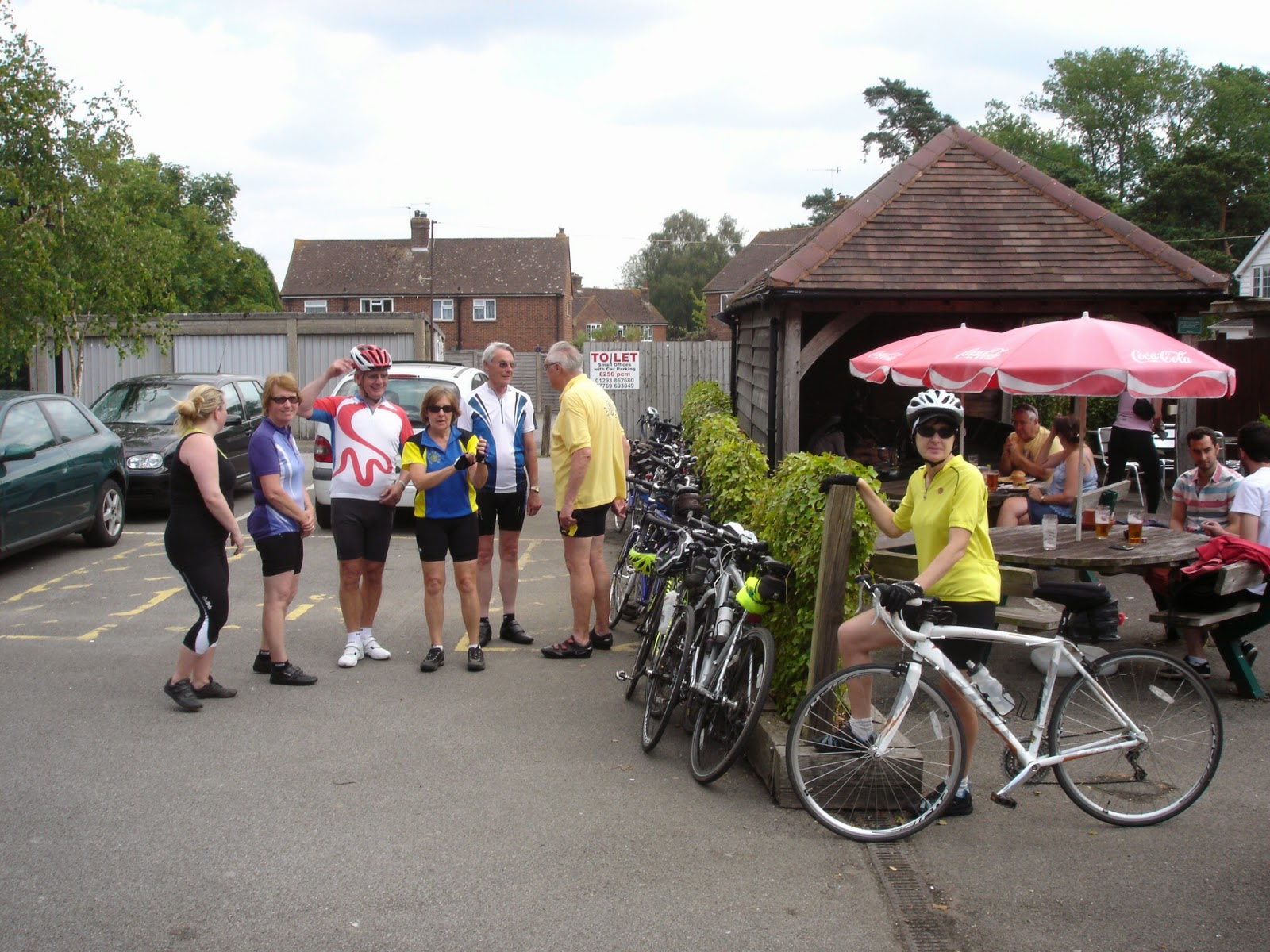 David's first new bike for over half a century is a customized one from Hewitt. He needed a new bike as his old one was wearing out and the components were becoming difficult to replace.
Initially he wanted a carbon-fibre frame because of its lightness and did some research on the matter, writing to CTC's technical officer, Chris Juden for advice. Somewhat to David's surprise, his letter and Chris' reply were published in the June/July issue of CYCLE on page 68 and David then decided to go with Reynold's 631 steel.
Only Hewitt, based in Lancashire, who were reviewed in the CTC magazine recently, supplied an off the peg frame in the right size, though not in David's favourite colour purple, and he went with their blue option. For all the other components he wanted Campagnolo as they can be replaced, though in the end had to settle for some lower quality items as only they would fit the frame and frameset. He admits he was a very demanding client and can go into greater detail if requested.
The result is what could be described as a fast day tourer that has the qualities David wanted such as comfort, lightness, and ease of riding. Many cyclists dream about having a custom built or customized bike, and this is one example of that dream coming true. 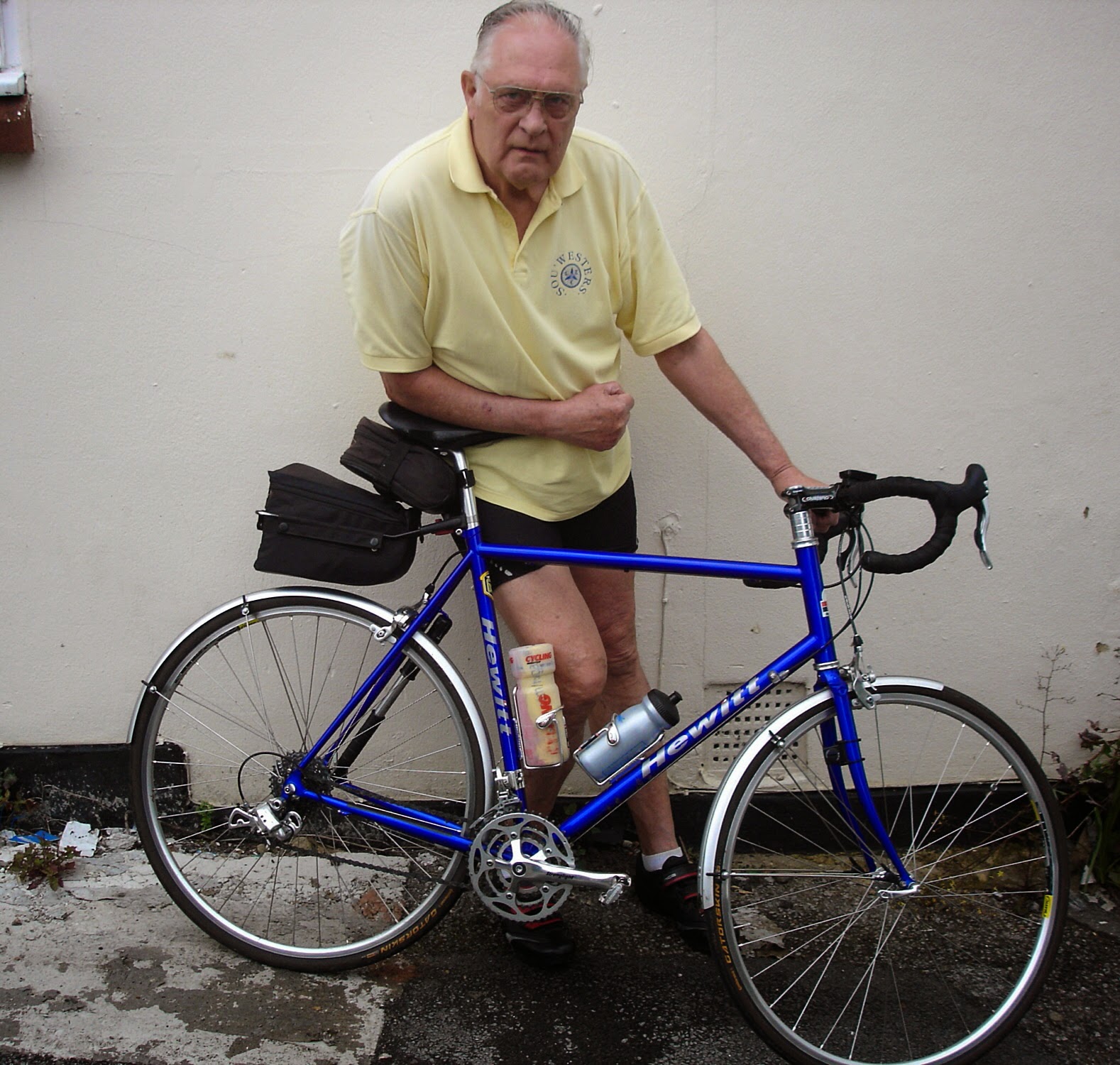 Cliff with Maureen as back marker led Andrea, Lillian, Tony Z ,Anna, Paul, Jane and Helen on an ambitious ride to Gatton Manor Golf and Country Club in Standon Lane near Walliswood, coming in the long way round.
Maureen clocked 59 miles and Cliff 47, having chickened out at Dorking Station . At the imposing entrance to the Golf Club some riders expressed alarm that it looked too posh. Having played there, Cliff was able to assure them it wasn't but kept his fingers crossed in case it had gone upmarket since his last visit some 15 or so years ago. It hadn't, and a good beef and horse radish sandwich cost £4.95. Other food at good prices was also available. It's worth a visit.
The return was shorter through Ockley, Capel Newdigate and Brockham for Tea. Cliff said farewell at this point to catch the train at Dorking as did Helen and Jane and Andrea picked up her car, the others riding home. Everybody seemed to enjoy it, at least they said they did !!
Maureen Whitfield

Angie leaves Nonsuch at 10am on a ride to the Greyhound pub in Charlwood. Cresting the North Downs with a fast descent down Pebble Hill to the quiet lanes beyond, over some undulations she will ride past Leigh and Norwood Hill to the lunch stop near Gatwick.

The return will be via Lonesome Lane, Horley and Brockham, to a tea stop in Leatherhead, so no more big hills. Roads throughout apart from the track alongside Betchworth Park Golf Course so normal bikes will be enough. The distance will be about 40 miles. 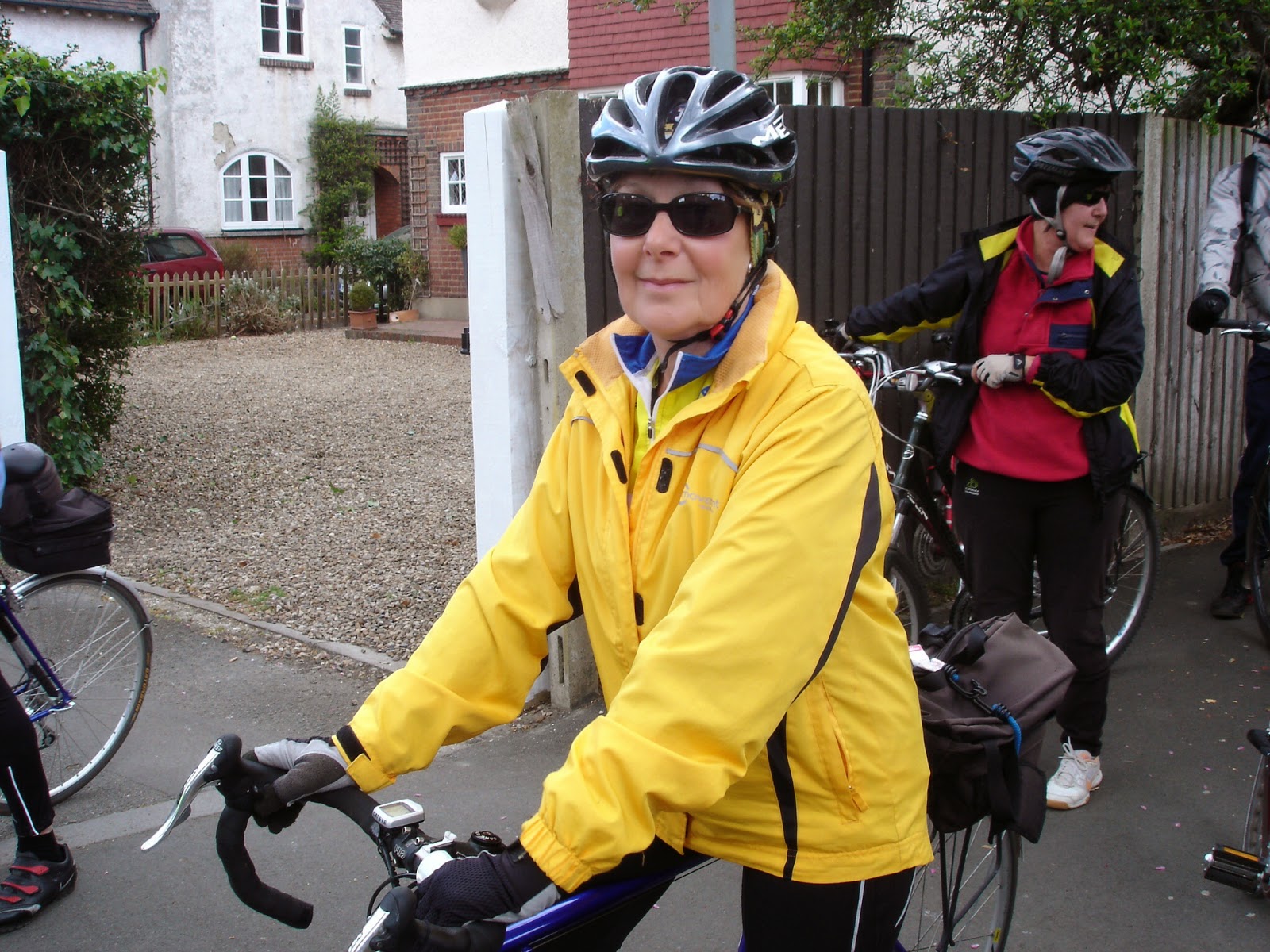 Let us hope you will not be needing waterproofs this Saturday.
Posted by Unknown at 06:48 No comments: 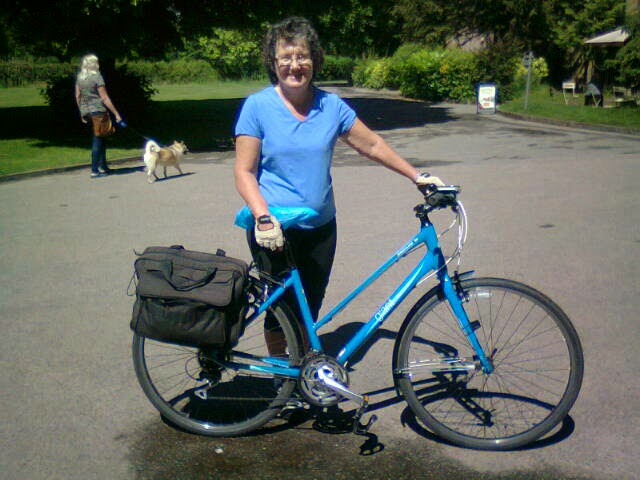 Carolyn has been leading rides for about 8 years after being gently persuaded to do so by David Aylett.
She likes to ride at a steady pace, not get too far ahead of the back marker, and to be always aware of the spread of the group.
She stops at regular intervals to keep the group together and aims to make the ride enjoyable by chatting to as many riders as possible.
Her favourite destination is Palmer's cafe in Ashstead, where she led her first ever Beginners ride.
She is pictured with her favourite bike, a Giant Escape, which she bought in February 2013. She got it because it has everything she needs in a bike.
Posted by Unknown at 01:09 No comments:

Next Step ride on the 15th June posted by Cliff Whitfield

Meet in Nonsuch Park at 10 o'clock then ride to Gatton Manor Golf Club for lunch via Brockham, Capel, Ockley and Mole Street.
Return via Okewood Hill and Weare Street in reverse and stop at Brockham for tea. I can also consider on the day Pyrford Lock via Send and return via Wisley for tea stop if preferred by the riders.

This ride takes you through Auriol Park, Malden Manor, Tolworth and ends up down by the Thames at Long Ditton. After savouring the bucolic delights of the river a short climb then takes you to Squires Garden Centre Cafe.
This has a pleasant outdoor seating area, and after refreshments the ride returns via Hook rise and the Hogsmill Walk in West Ewell. Primarily, you pass through suburbia with its rows of almost identical semi detached homes. Here and there older houses remain, especially on Ditton Hill, relics of a more rustic past.
Carolyn was the leader with Lynda as back marker and there were no mishaps or mechanical failures on an warm, often sunny afternoon. Can we dare to herald the arrival of summer? 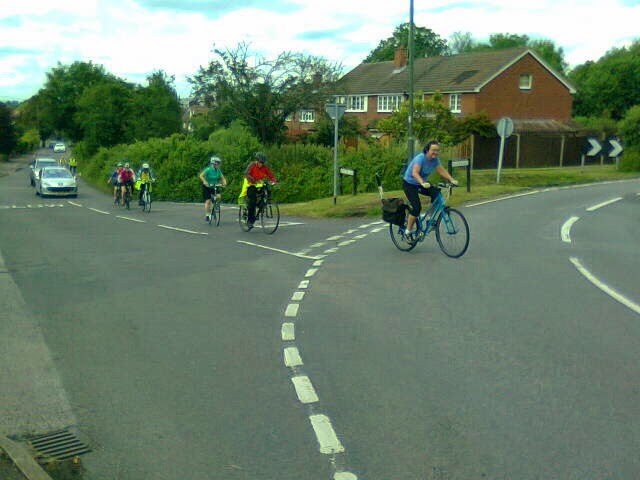 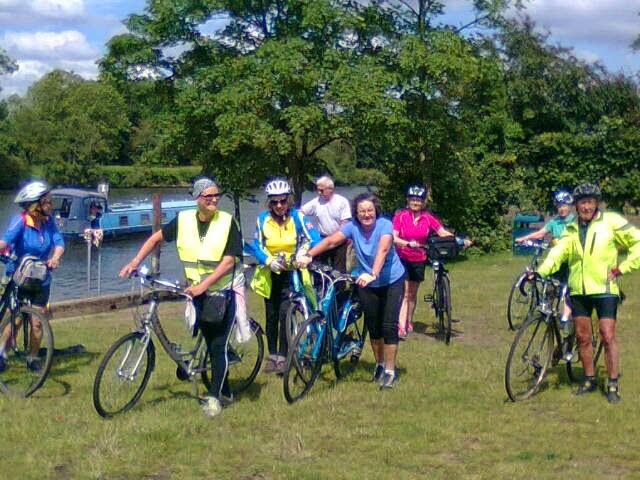 Ride to Morden Hall Park on 31st May

17 riders set off from Nonsuch on a dry, if rather cloudy at times, afternoon. A contrast to the previous weeks torrential rain which saw many abandon before even setting off. Down the hill toWorcester  Park and the newly resurfaced Green Lane past the stables and the cemetery. Entering Morden Park, sections through the woods were still muddy despite copious amounts of top dressing of wood chips and those with new bikes had good reason to curse. Through the suburban Merton Park to Morden Hall park where most stopped at the Stable Yard cafe with its ample outdoor seating if rather limited supply of cake.
The return was via Ravensbury Park , Rose Hill and Sutton Garden suburb to Angel Hill where Colin lay in wait to get an action photo of the group. Riders peeled off as we proceeded via Western Road and Cheam Village back to the Park.
A good afternoon out with no punctures or other mechanicals. About 10-12 miles in total.