Nigel's ride on the 17th May

I missed off a bit of David's post by mistake, and here is another photo from the ride.

As I'm sure Emelia would agree, you don't have to have a mountain bike to
enjoy a day out off road on a dry and sunny day.  Having had a fall, Nigel
may not agree. 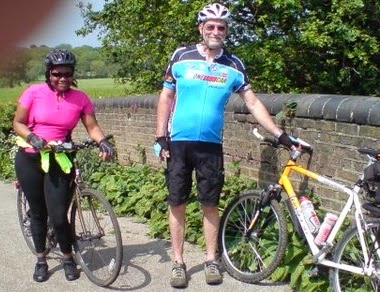 Nigel had a nasty fall. The picture of him in the previous post about the ride sitting on the ground was not him relaxing and grinning. He will be off cycling for about another 6 weeks, so we all wish him well.
Posted by Unknown at 03:54 No comments: 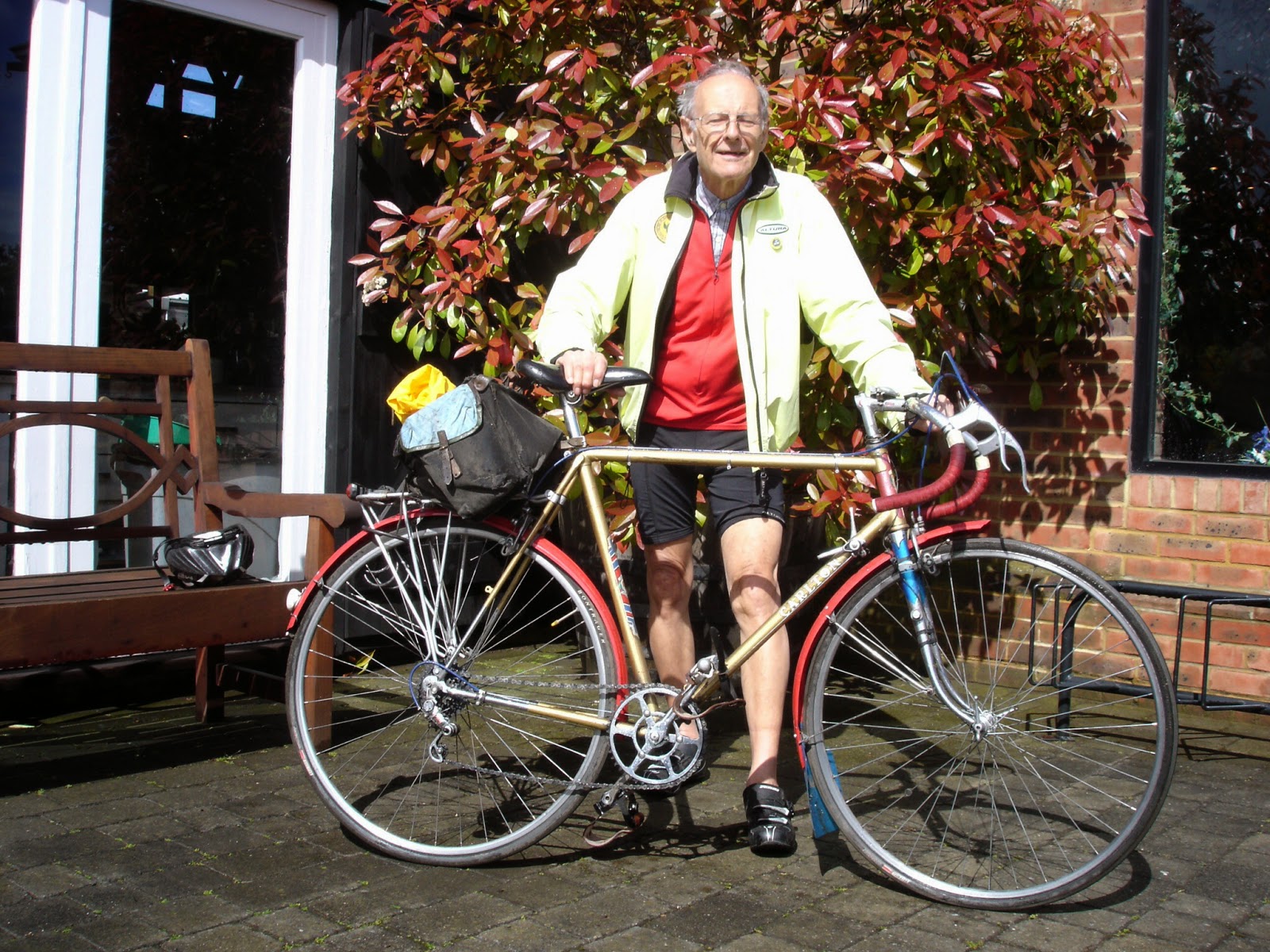 Brian kindly agreed to become the first Beginners Rides Leader to have a short profile added to the blog so people coming on rides can recognise leaders and know a bit about them.
He started leading rides last year as there was a shortage of leaders and wanted to do his bit to help.
His three aims on a ride are to keep everyone together, ride at a steady pace and keep everyone safe.
His favourite destination is Woodcote Garden Centre as it has good facilities, especially seating.
His favourite bike is the 1950's Carlton, pictured above, which always excites interest from other riders.

Thank you to Brian from me. More profiles will follow when I can catch willing subjects.
Posted by Unknown at 03:54 No comments:

Nigel's ride on the 18th May posted by David Aylett

The Big Bike Ride left only three of us to enjoy Nigel's all day off road
ride to West End Lane Esher on Saturday.   Emelia, Nigel and I waited in
vain for more to join us but eventually set off through the woods following
the Hogsmill River, then from park to park along bridle ways and paths to
Chessington, Claygate and the beauties of Esher Common where we passed
Bluebells, Rhododendron and Camelia all flowering together. Lots of chat and
an enjoyable lunch at The Prince of Wales.  A recommended day out for the
future, thanks Nigel. 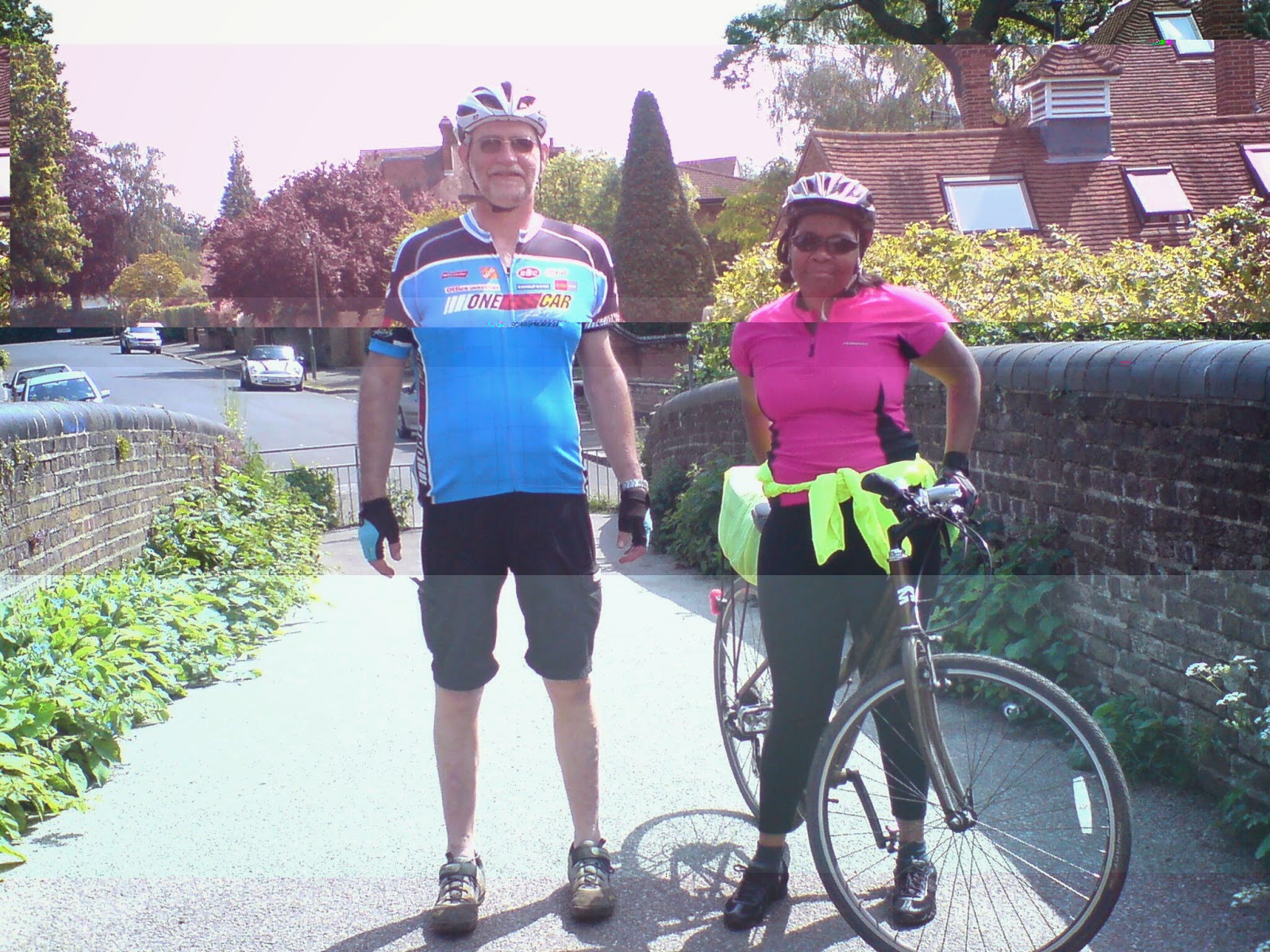 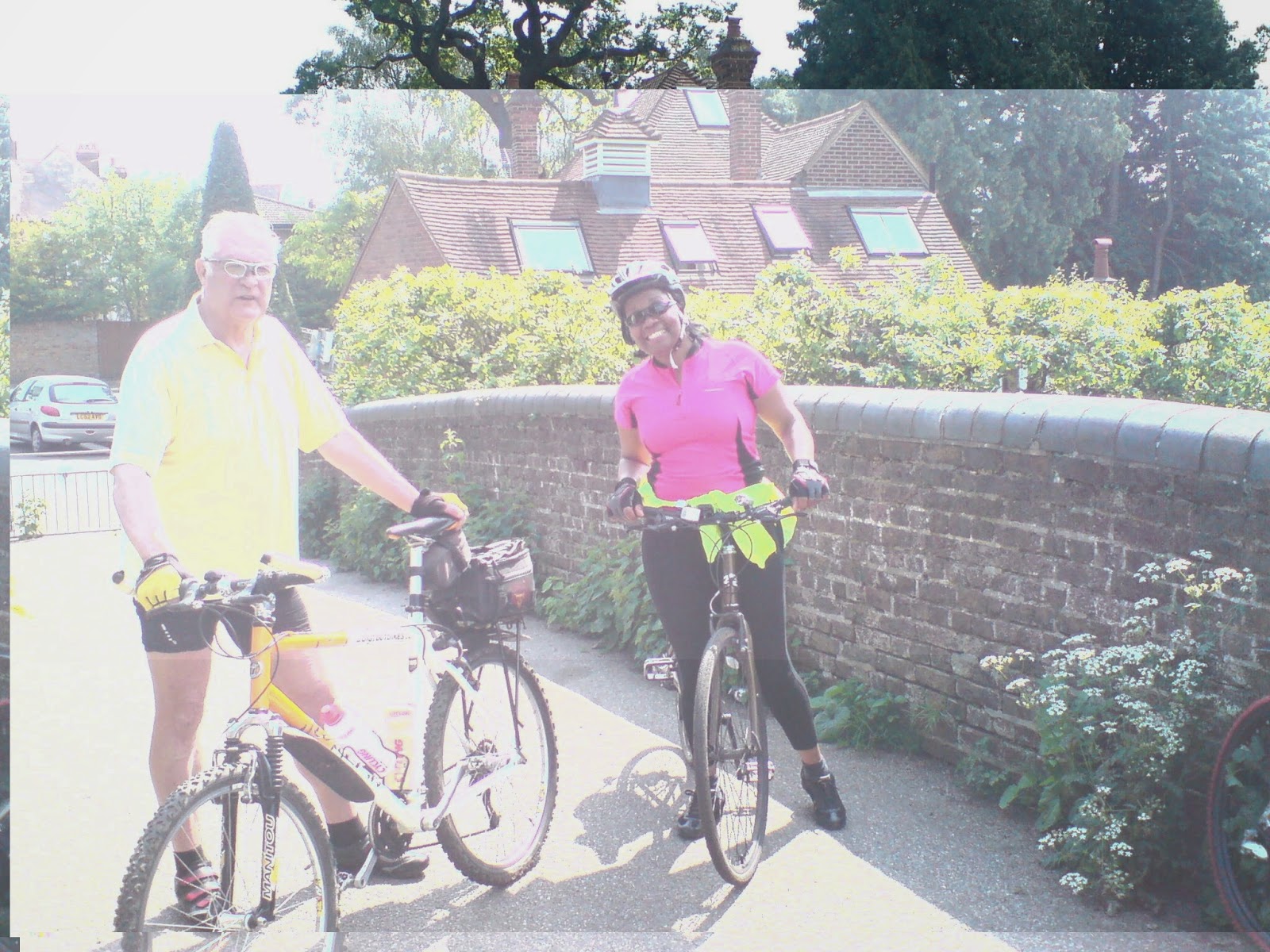 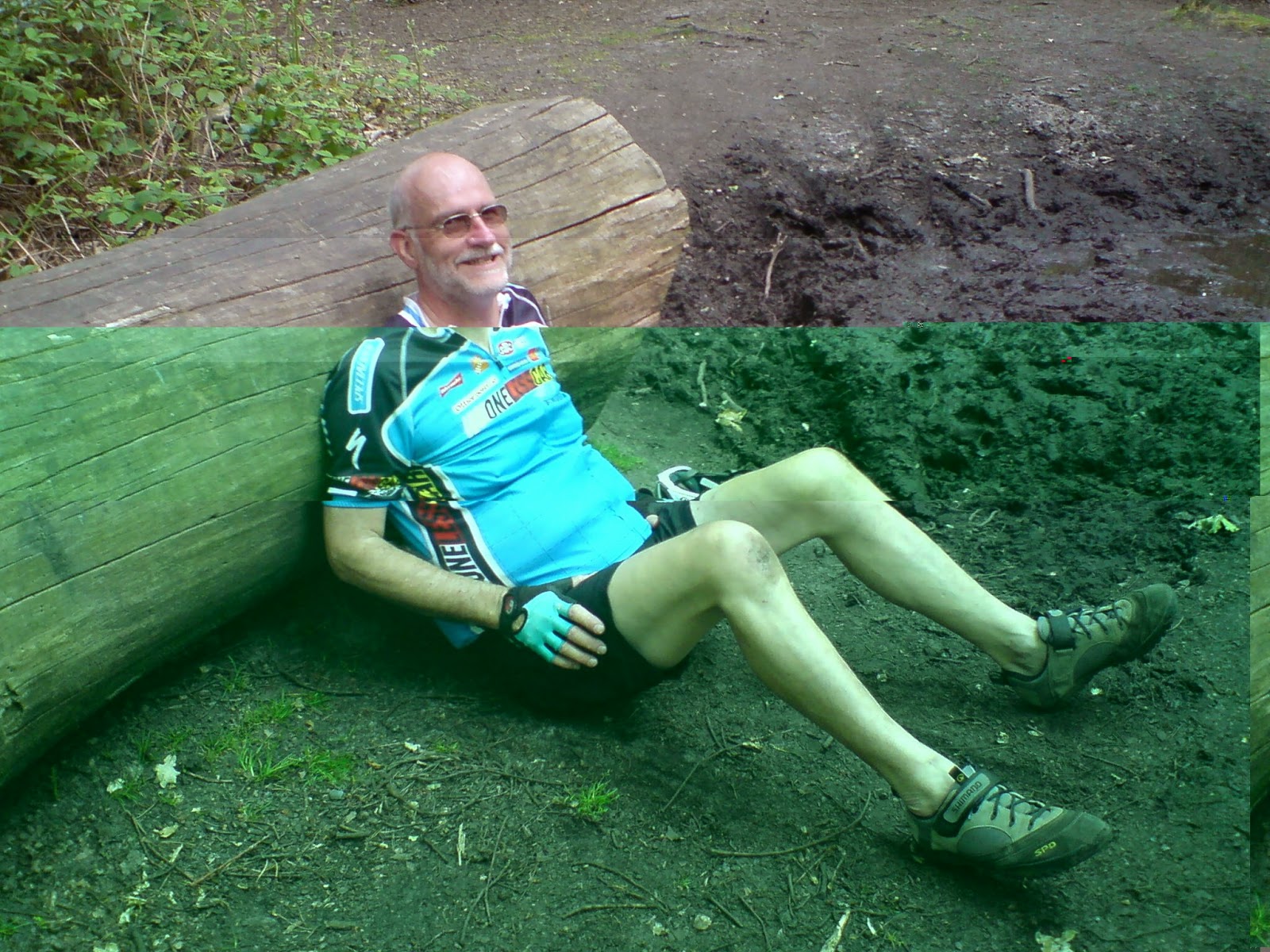 Next Step ride May 11th by Cliff Whitfield

Cliff and Maureens ride 11th May 2014
Cliff and eight lovely ladies took the train to Dorking to embark on a ride through the Surrey countryside and the Surrey Hills, there was Maureen of course and Anna, Angie, Lynda, Sonia, Toni Z, Lillian and Andrea. First up Punchbowl Lane, a bit cruel at the beginning of the ride, but most got up it except Cliff and Sonia who gently climbed on foot.
An early coffee was enjoyed at Henfold Lakes which was bathed in sunshine, a first time for Andrea who thought it was magical. Onwards on to Newdigate and Capel and down the picturesque Weare Street where we were overtaken by the Human Race sportive, not that much faster. Henfold Hill again catching out Sonia and Cliff who resorted to walking.
Our arrival at the Plough at Okewood Hill was too early for lunch so we continued past the Scarlet Arms and onto Forest Green for lunch at the Parrot. Over the hill out of Forest Green (which we all got up) and back via the way we came to Ockley, over the A24 to Newdigate where we took the road to Brockham for tea at the Church. A slight error on the way resulted in two extra miles on the clock! A short ride to Dorking Sation ended the day. The total was 41 miles.

There was a low turnout at Nonsuch, possibly due to a bad weather forecast of strong winds and heavy showers, and both the long and short rides combined to ride to the Garden Centre at Woodcote via Sutton and Carshalton Beeches. The forecast proved to be accurate unfortunately, with torrential downpours and squally winds at times, making it feel more like October, but at least it was warm and dry in the Garden Centre cafe.
I took some rather poor photos which are not worth posting here. There is an art to taking photos of riders on the move and you have to stake out a position in advance, then hope there are enough riders to get in the picture and no pedestrians or cars get in the way. More practice required for me.
I went home after the tea stop, so avoided going directly into the wind on the return journey.

I was able to get some details from Nigel Taylor about his all-day ride next Saturday the 17th to West End Green near Esher. Starting at 10 am from Nonsuch, it will be mainly off road via Esher Common with a lunch stop at the Prince of Wales pub. The return will be via Hook. Nigel will be on his mountain bike and recommends others do the same. If there is as much rain as there was yesterday be prepared for some mud.
Posted by Unknown at 04:20 No comments:

Next step Sunday 11th May ride

Weather conditions permitting - on Sunday 11 May, Cliff Whitfield will lead a leisurely all-day ride from Dorking to Okewood Hill. The plan is to travel by train from Cheam to Dorking at 9:46 AM and from there cycle via Capel and Weare Street, Ockley to Okewood Hill. Alternatively meet at Dorking station at 10:15 AM. Keep in mind travelling in a group of 4 will give a considerable discount on the train fare (£15.60 for 4 people as opposed to £7.80 for a return for one). Total cycling distance approx. 35 miles with stops for coffee, lunch and tea.
If the weather forecast is ambiguous, please call Cliff on 020 8337 3152.

I was not expecting to be on this ride, and had planned to take some photos of the short ride to Epsom Downs. However, as no one else was available I led 17 riders to Wimbledon Park via New Malden, Copse Hill and Wimbledon Common. The Common was surprisingly wet in places and in others the gravel infill to some of the deeper puddles was difficult to ride on, especially for those with narrow tyres.
Wimbledon Park was very busy, as you would expect on a Bank Holiday weekend, with queues at the Cafe. After leaving the Park we went through the back of Wimbledon Town Centre, through Merton Park and across to Hillcross Avenue. I was keen to see in what condition Green Lane between Garth Road and Worcester Park was, as I had seen resurfacing going on earlier in the week. Liz Scrivens decided to use the normal route through the Cemetery and Joseph Hood, and we met her at the other end of the Lane. Although not fully resurfaced, the Lane is much more rideable and is now a good way of avoiding the A24 on my usual ride to Nonsuch from home in Wimbledon.
I also saw last week on the ride to Oaks Park that a new hard surface bike path has been laid through the car park, so that particular off-road ride is much easier.
I was pleased to see Pat Coulson and John Gould out today after breaks due to illness, and the ride was completed with no mechanicals or anyone getting lost. Thanks to John Bellamy for being an efficient back marker.
No photos this time as I accidentally deleted them from my camera, which is a shame as it was a sunny afternoon with almost no wind and the scent of May Blossom to accompany us.
Posted by Unknown at 02:12 No comments: