Tony led 4 others, David, Pat, Jenny and Harry via Hyde Park and Hampstead Heath to Alexandra Palace. We began at Waterloo station by Platform 2, sped past the tourists on Westminster Bridge, the protesters atop the Wellington  Arch and up through Maida Vale and the Regents Canal to Hampstead. This is where the hilly part of North London begins. A stop at Parliament Hill to take in the views (much cheaper than paying to go up the Shard), then down to the bathing ponds and the steep climb up to Hampstead Village past the palaces of the super rich.
A fast descent through Queens Wood took us to the foot of Alexanda Palace Hill and another steep climb to the Grove Cafe in the Palace Complex. The food was prompt and the views over SE London were great with the good visibility prevailing.
Thoughts that all the hills were now over proved to be an illusion as we came through Hornsey Vale to Finsbury Park where David reminisced about races in his youth, and the start of the Greenway back up to Highgate Village. This quasi rural fragment is well worth a visit and it brings you out by Highgate station. An urbanised, rather trafficky stretch, took us down through Kentish Town to Camden where we turned into Regents Park and it's hordes of tourists. They must spend a lot of time queuing on their visits to London, a noteworthy one being outside the Sherlock Holmes Museum.
We sped south down Baker Street and Seymour Street to Hyde Park, also thronged with Tourists. These had thinned out by the time we crossed Battersea Bridge after which Pat diverted to Clapham Junction and a train to her car in Dorking. Our tea stop was at Merton Abbey Mills after which we dispersed. The ride was about 33 miles from Waterloo to Abbey Mills. The weather stayed dry though became rather breezy.
It was a real variety of riding environments and starting at Waterloo is a good way to begin. Many thanks to Tony(I like maps)for working all this out. Urban rides require careful planning and concentration when riding. 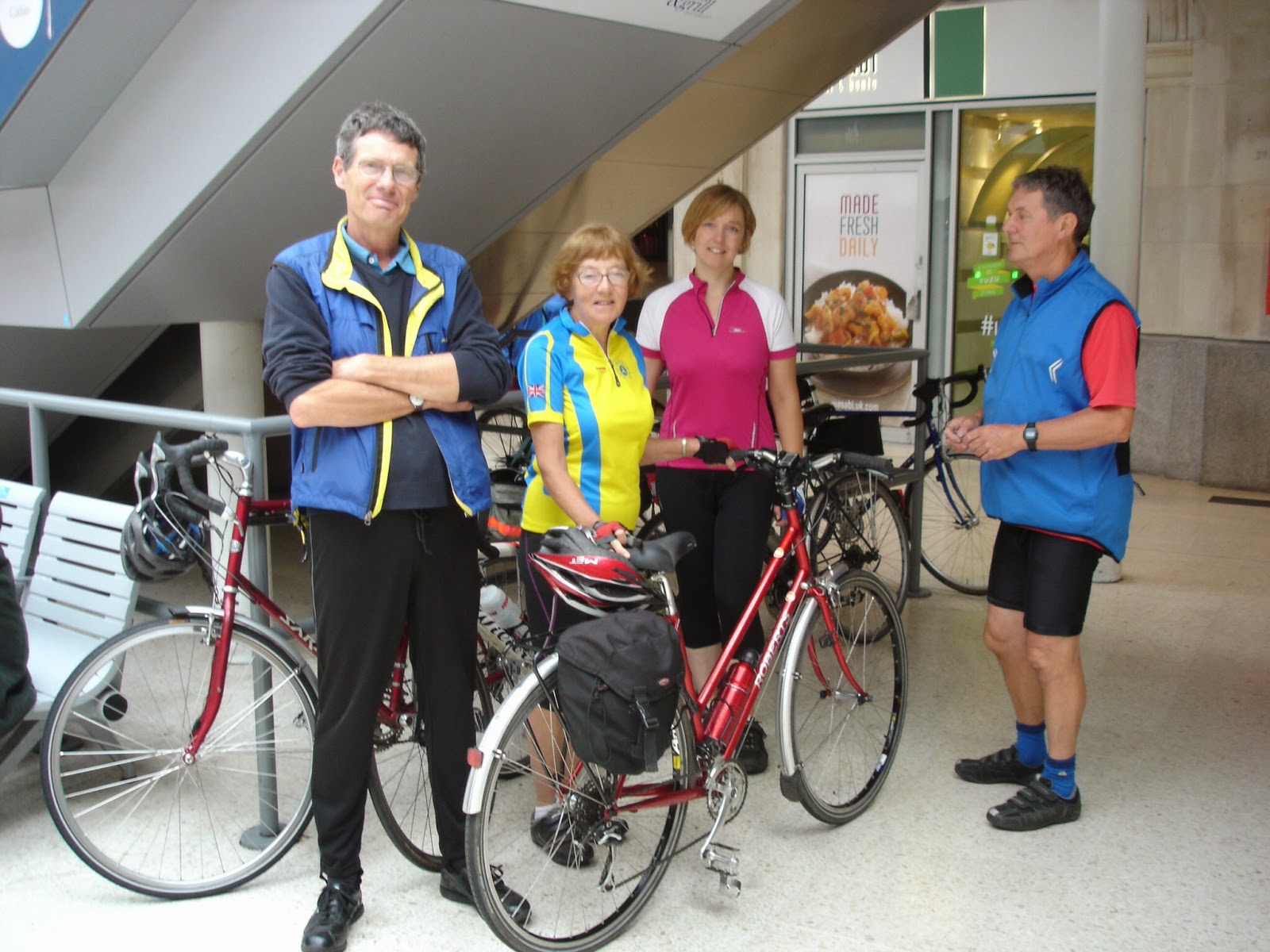 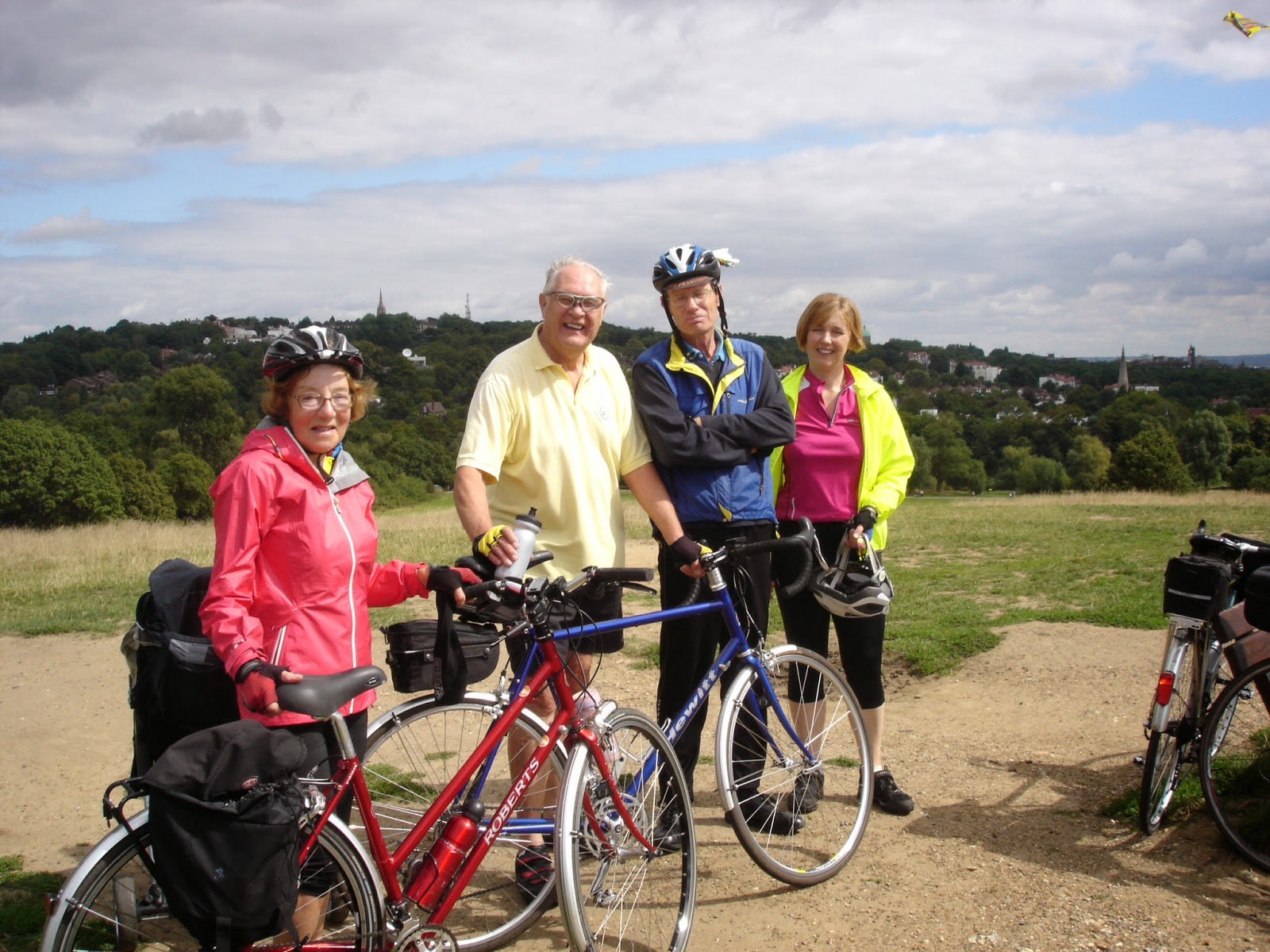 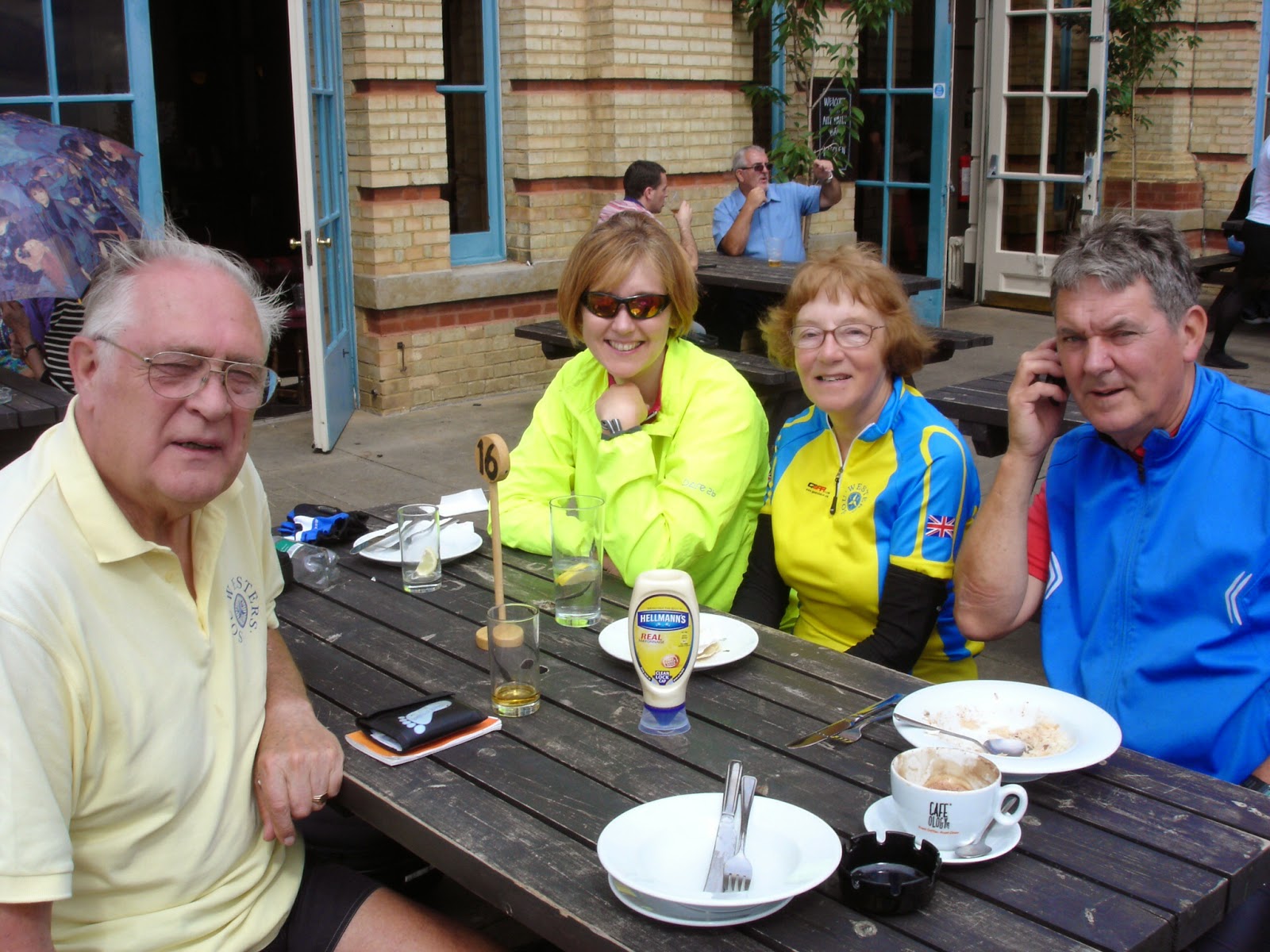 As I failed to get a place in this, I volunteered to help lead a Merton Cycling Campaign ride into Central London Freecycle.
Although 100 had registered, about 60 turned up at the start in Wimbledon Town Centre. There were several children and young people with their parents and a range of bikes from rusting mountain bikes to smart new road bikes. Doing the pre-ride checks, the majority of faults were under inflated tyres and saddles at the wrong height. Most had not brought along pumps and spare inner tubes, so were going to have to find their own solutions if they flatted. Not usually a problem in Central London with so many bike shops around.
With excellent marshalling and leading by Charles Barraball with a large green flag attached to his pannier rack, we made good time along the Wandle trail and across Wandsworth Common to stop at Clapham Common for a comfort break. Here we met the Lambeth Group and numerous other individual riders heading into the City.
We crossed Chelsea Bridge and went up the CS7 to Parliament Square where we dispersed to join in the closed roads route and visit the various attractions at the hubs dotted along the way.
It was an impressive sight seeing so many cyclists of all shapes and sizes slowly circulating around. So many that there were choke points mainly around Trafalgar Square and the Mall, where we mixed it with the hordes of tourists there for the changing of the guard.
I ended up at the hub by St Paul's where there was cycling polo and a mini street velodrome. The weather was mainly sunny with light winds, perfect for such an event, and there were estimated to be 60,000 plus bikes present during the day.
There were fewer riders for the ride back, though we picked up a few from the Tooting group who had lost their leader.
There was one collision and a couple of flats on the way back, and it was noticeable how much busier and less accommodating the motor traffic had become. The group marshals by now had honed their techniques and even on main roads the cars and buses were stopping.
I would thoroughly recommend doing this when it comes around next year, unless the weather is like what it was the day after.

I was a helper at the LCC hub in Hampton Court for the Ride 100, which had been shortened to the Ride 86 due to the weather forecast. Despite being virtually flooded out at around 9 am I was impressed by the good spirits of the rides and how keen they were to deposit litter in the available bins. Almost all were determined to continue and were rewarded by improving conditions later on.
Mostly people were riding road bikes though there were many tandems and the odd tourer, and towards the back there were obvious novices. This has to be an event for everyone who is reasonably fit.  The other lesson is that showerproof jackets are not up to the job of coping with downpours.
There are also accounts of the ride on the Wayfarers blog.

Under a rather threatening sky, but with a following wind, 8 riders followed me out of Nonsuch towards Farthing Down. The route involves some urban riding and the climbing of hills, which may be why it is less popular than routes out to the South and West, but the rewards of Kenley Airfield and Farthing Down itself make it well worth the short efforts required. We even had the added bonus of briefly stopping at Mayfield Lavender fields by Oaks Park on the return leg.
Over tea at Coughlan's bakery in Caterham on the Hill, I reflected that the last time I led this ride a year or so ago there was a completely different group of riders, such is the turnover at present. It was really pleasing that everyone made it up Higher Drive by Kenley Station without getting off which showed how far some beginners had come since they joined in terms of fitness and technique.
Gillian took the photo and recorded the route map and Sandra was the back marker ensuring that the slowest rider always had company. The threatened rain never materialised, and it was a beautiful late afternoon as we cruised down Farthing Down with the distant view of the City of London. All in all about 30 miles was done. 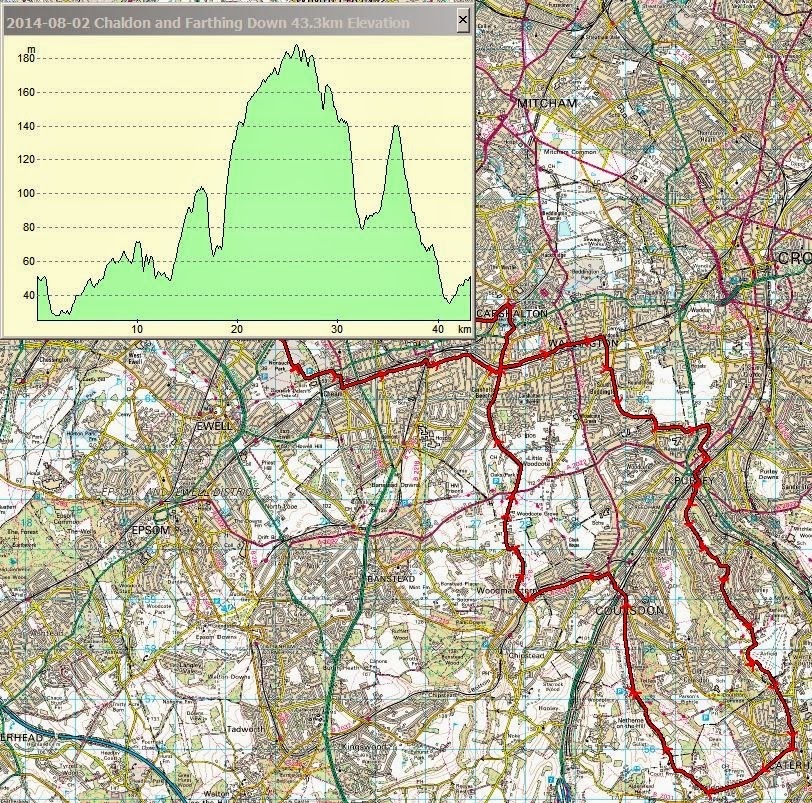 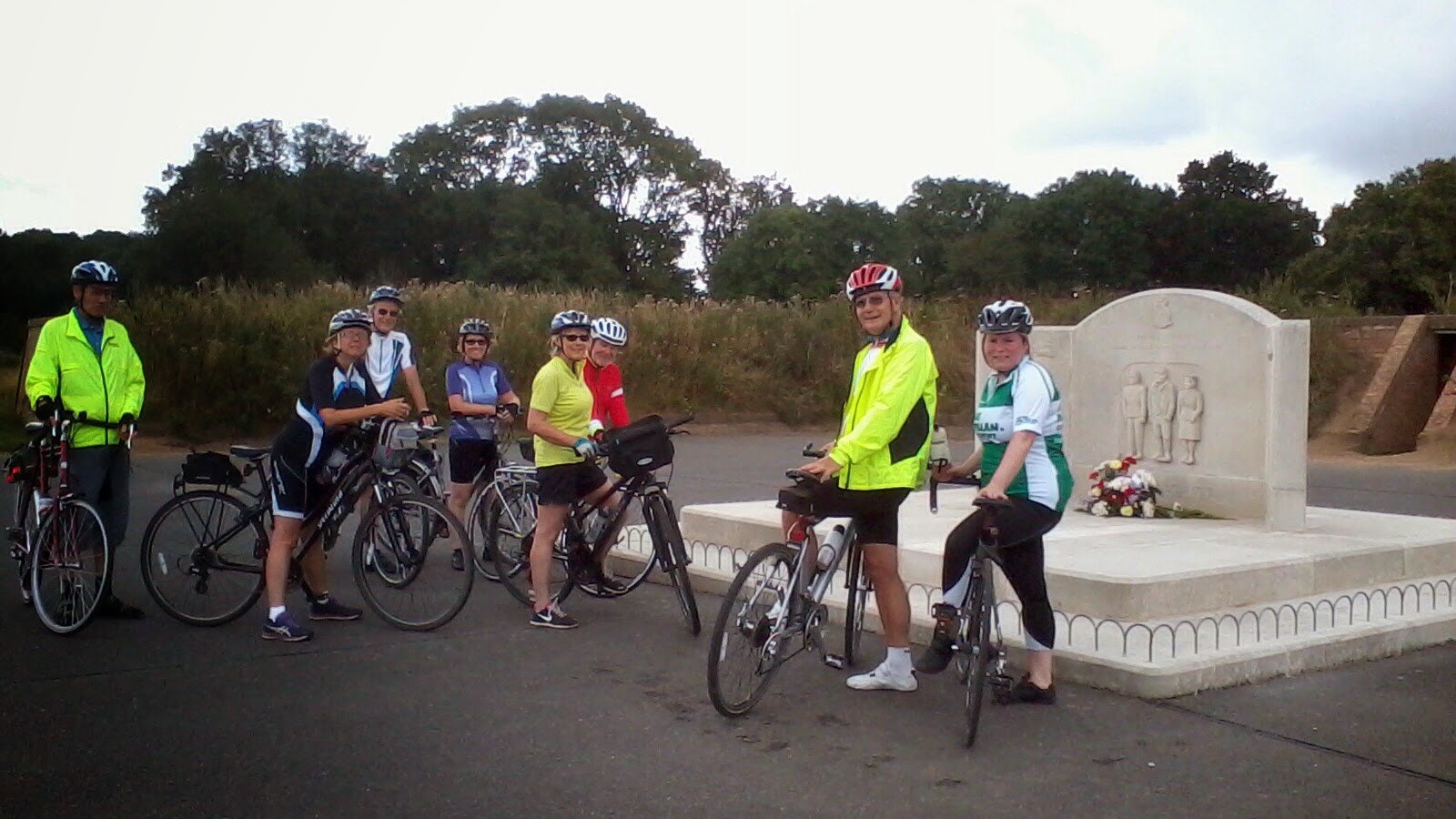