Once more unto the breach. Sutton pod, 24 October.

Both Karen K and Jeff were diverted on Saturday by matters more important that cycling, so our back-up plans for splitting the group did not need activation and five of us set out, aiming for Bushy Park. 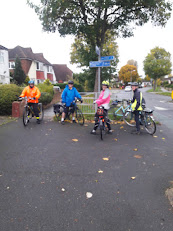 We left an hour early at one-o-clock because the weatherman said that the rains would come at four, but the weatherman lied.  It was the eve of the anniversary of the Battle of Agincourt but would gentlemen abed in England be accursed they were not here?  I think gentlemen abed had taken the right decision.

One of our happy band of brothers had not recovered quite as quickly as she thought from a non-Covid bug and as the wind increased and we got wetter the sight of a marquee outside the Ferry on the Portsmouth Road persuaded us to ask inside if the restaurant would do us a coffee outside, within the marquee and thus within the law.

The coffees (and the teas) were very good, but the damp had got to us all, not only to the peaky one, so we truncated the ride and turned for home.

We did 37 Km in all door-to-door, which in the circumstances most of us felt was a reasonable ride. 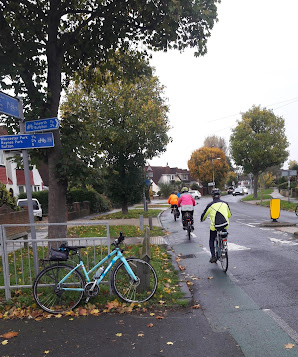 The Wandle Way to Wimbledon Windmill

At Beddington Park on Saturday ten turned up, including two complete newcomers, despite a coldish, greyish, unpromising day.  Colin took the newcomers and three regulars up to Flitton’s, a traditional tea stop with big, if bleak, outdoor facilities south of the Smallholdings but only two wanted a longer ride up Wimbledon Hill with Maggie and me.  The plan was to suss out Megan’s, a cafe on Wimbledon High Street with heated outdoor tables which welcomes groups of four; but since you have to book a table, to carry on this time and have our outdoor coffee at the Windmill Cafe.

Karen K would in normal times be regarded as a newbie but recruitment is vigorous at the moment, so someone whose first venture with the club was the All Day Walton-on-Thames ride two months ago is now considered an old hand!  Roger was our other companion, rarely without Anna, who had eaten something spectacularly dodgy on Thursday.  Get well soon, Anna.

We decided upon the gentle but circuitous route all the way up the Wandle Path to Earlsfield and on the way, at the Hack Bridge, while going through the delightful little public garden that Claudio Funari, a local resident. has created for the enjoyment of all, we came across the creator himself, proudly showing us his third certificate of recognition! 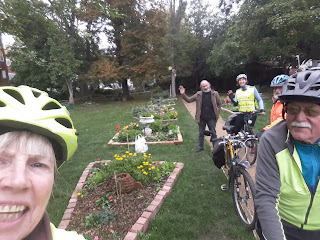 At Earlsfield we headed west to cross the busy Durnsford Road at the lights and enter Wimbledon Park under the overground Underground, Wombling free.  Sooner or later, anyone who goes to Wimbledon High Street has to climb a hill and since we had taken the river route we did it all at once up Home Park Road.

Once Megan’s (not difficult to spot) was duly sussed (pleasant, crowded, only lamp posts and the like to which to secure your bike) we used Parkside and Windmill Road to make the trip a circular one.  We were in the Windmill Cafe last week on the way back from Chiswick House, only this time the rain was gentler, though we again secured a spot in the Marquee (is that outdoors?  Who cares?)  Home the direct route across the common, past the Crooked Billet, down the Downs, through Lower Morden and across Morden Park.  We split at St Helier’s and although the winter has not quite set in, a hot home cup of tea was very welcome. 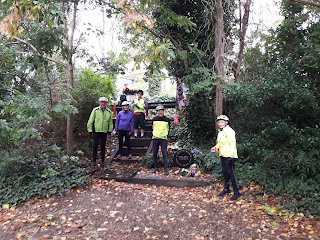 Paul's group minus Maggie, the photographer.  John, Anne, Paul, Ed & Maureen at the Marc Bolan memorial, recalling the days when we liked to boogie. 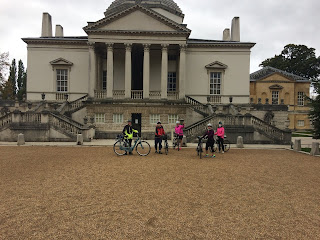 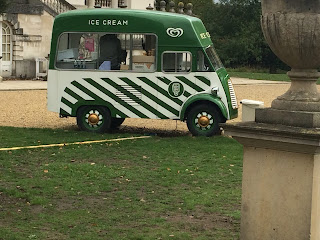 just the ticket on a cold, drizzly day! 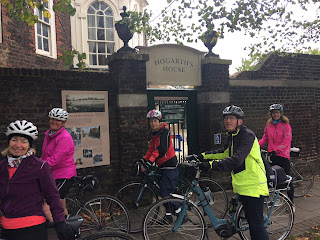 Maggie, Brenda, Lilian, Ken and Alice,Tony's group, minus photographer, route planner and leader Tony himself, at Hogarth's House, named after a roundabout.  Mr Hogarth was on holiday, so it was closed.

24 riders in four groups left Nonsuch Park at various times on a cold October morning. The route took us through Richmond Park, East Sheen and Mortlake, using two crossings over the Thames, Barnes railway bridge and Chiswick bridge.
Lunch stop was at Chiswick House Gardens and after lunch we walked around the lovely gardens, then off to view Hogarth’s House, Fulham F.C. and Fulham Palace.
Crossing the river at Putney Bridge we made for Roehampton, visiting Marc Bolan’s memorial on route ,there was a little rain on our way to tea at Wimbledon Common.
Thanks to the three Sub leaders Steph, Helen and Paul and also the back markers
See you next April
Tony
Posted by Paul James at 06:20 No comments:

Leaving Nonsuch Park Cafe in groups of six at your allotted time starting from 9.45am.
Lunch or your own picnic at Chiswick Gardens cafe, flat ride approximately 25 miles.

Please e-mail me if you would like a place.