Despite the dire weather forecast 3 cyclists left Nonsuch Park on a dry morning, meeting up with Rob and Ruth on their tandem at Banstead. We stopped for elevenses at Tanhurst Farm. By now the sun was breaking through the clouds, and despite a strong south westerly wind we made it to Partridge Green for lunch, sitting outside in the sunshine!!!
We continued our ride to Shoreham. After Steyning we left the road for the new Downs Link cycle track which we found very smooth and wide. On reaching the end of the Downs Link we stopped for a photo call at the new sculpture.
From Shoreham the wind blew us along the seafront to Brighton where we stopped for tea, (no swimming though). The sea was far too rough as seen by the red flag. After tea we all went to the Train station for our journeys home.
Thanks to all who accompanied me.
Don't always believe the weather forecast 😎
Regards Tony 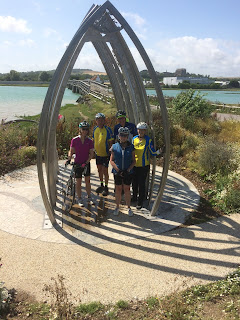 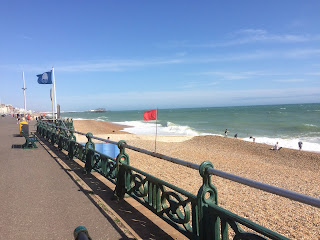 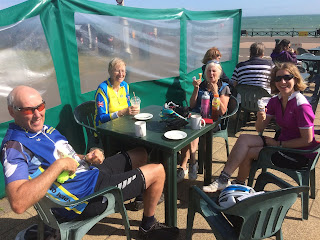 Torrential rain overnight and intermittent showers this morning were enough to deplete our numbers this afternoon. But Trevor joined us with his 4 week old bike having been encouraged to take up cycling when he acted as support to a charity fund raiser London to Paris cycle ride.

We couldn’t compete with Avenue Verte and Croydon was our destination, not generally twinned with Paris! However, Colin, Ken, Maggie & Paul set out with Trevor through the South London roads. We left Beddington Park by the church and took the paths by the Wandle to Croydon. One driver in a hurry decided to weave between our bicycles and get in front of Colin only for us to be directly behind him at the next two sets of lights. We turned right up to East Croydon and left our smoking, inconsiderate driver to face central Croydon traffic. We passed Croydon Court and crossed to Park Hill Park leaving by the water tower. We then cycled through the quiet roads to Lloyd Park where we stopped briefly to orientate Trevor. It's then across the park, downhill and a short ride to Coombe Wood for tea and cake and a robin flying between the tables and selecting the best crumbs.

We turned left out of Coombe Wood through the undergrowth to descend to Croham Road. Making our way through South Croydon we can't complete a ride without a hill so up Haling Park Road we go. Recovering our breath we cross Purley Way and return to Wallington where we separate to make our way home. We hope to see Trevor again at future rides.
Posted by Margaret James at 11:24 No comments: 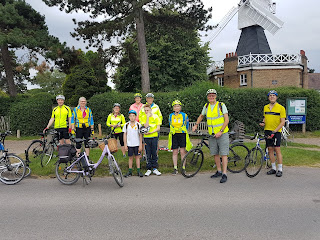 It was my turn on the second week of Wimbledon to lead the traditional Cyclism ride from Garth Road to the tennis championships.  Our grandsons Rufus and Felix came with Maggie, Stephen, Sue, Tracey, Anna, Roy and Steve W and Daniel joined us having cycled from work in Canary Wharf; eleven in all.

It was a fine evening for a ride and luckily Maggie and I had recced the whole thing on Friday, because since the route was created Cannon Hill Common has become entirely no cycling.  It was no problem to carry on up Cannon Hill Lane to the footpath after the river bridge, but best practised beforehand!

I reckon The Downs is probably the steepest route up Wimbledon Hill, but that is the tradition, so we did it and the ride to the windmill was pleasant across a dry common sprinkled with after-work runners.  The conveniences at the cafe up there are just what they say; open when the cafe was closed!  Down Somerset Road to the tennis, we arrived just in time to catch the big crowd going home after one of the fourth round matches and had to push our bikes up Church Road, not because it was steep but because it was a traffic jam with hundreds of tired spectators on foot making it impossible to mount.

The traditional view of the gleaming spires of Croydon from Denmark Road (earth has not anything to show more fair!) and a pleasant, mainly downhill cycle home.  34 Km door to door at a pleasant summers evening 14 kph.

Shirley Quemby has been chosen by Cycling UK to be on their 100 Women in Cycling list 2019 for actively encouraging and assisting people to cycle for over 50 years.  For those who would like to read a little more, the Cycling UK article on her is at:
https://www.cyclinguk.org/article/shirley-quemby