Next Step Ride on Sunday 26th

Thirteen riders left Nonsuch Park heading for Pyrford Lock via L'head Fetcham Stoke D'A and Wisley Village. Cliff apparently forgot to brief the back marker ,Maureen,on the route so after a mild rebellion Fetcham got byepassed!
After coffee at Squires and another mild discussion as to whether Squires was in Stoke D'A or Cobham the ride continued to Martyrs Green were a right turn took us to the A3 where Angie  Neil and Peter left us . The footbridge took us over the A3 to the Wisley Garden Centre where there were no takers for a stop at the shop other than Jane so on thro' the village to Anchor at the lock, always a nice surprise to first time visitors, this time Andrea. Lunch was delivered without delay and we turned right out of the Pub and over the humpback bridge to Ripley and the old aerodrome. A slight mistake by the leader at the big roundabout saw us taking the 2nd exit instead of the first. This corrected we climbed bank to the airstrip and so  to Cobham and L'head for tea at Costas.
and back to Nonsuch just as it was getting dark.  Weather was good for us and 42miles covered.
Cliff and Maureen 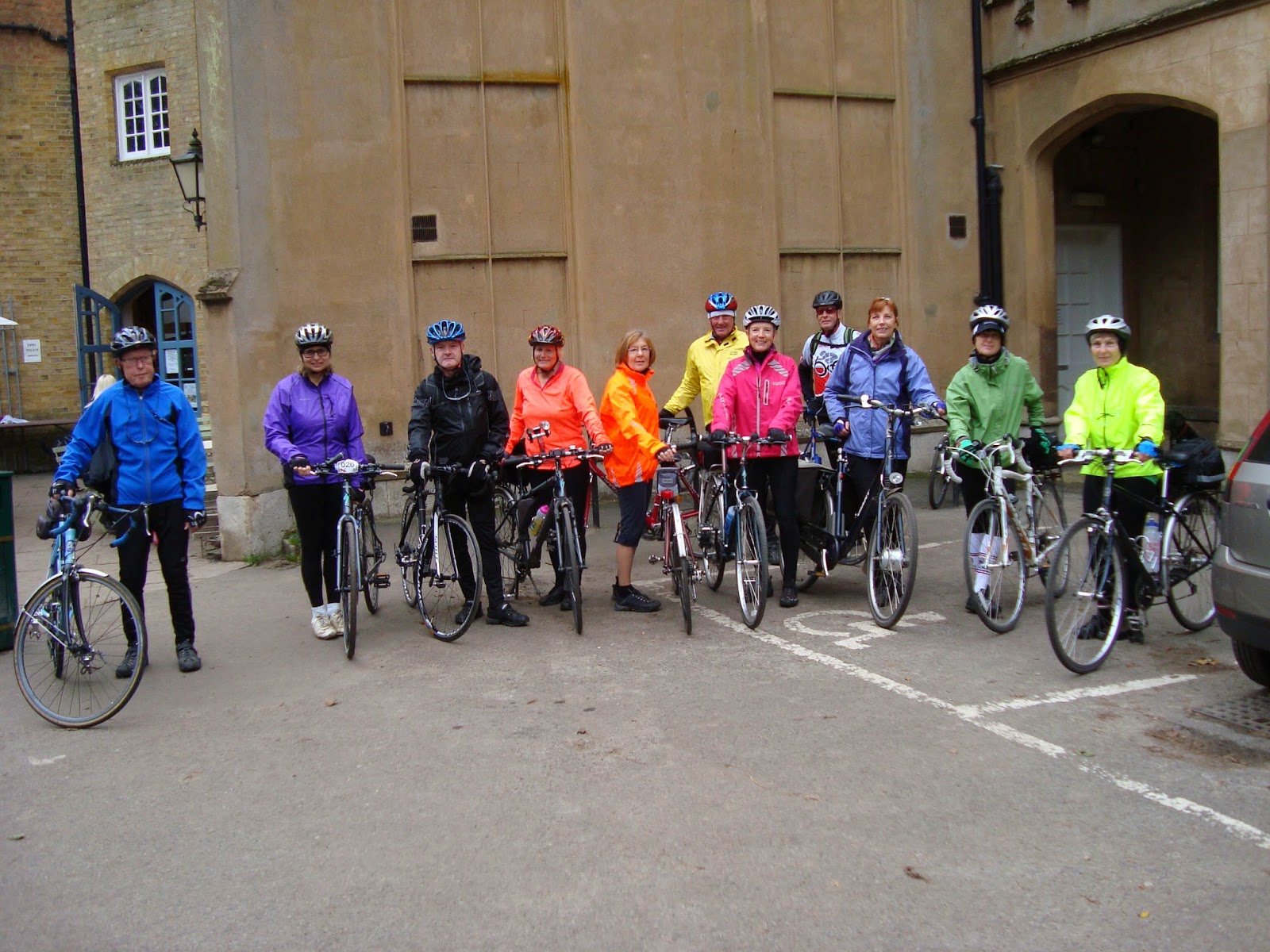 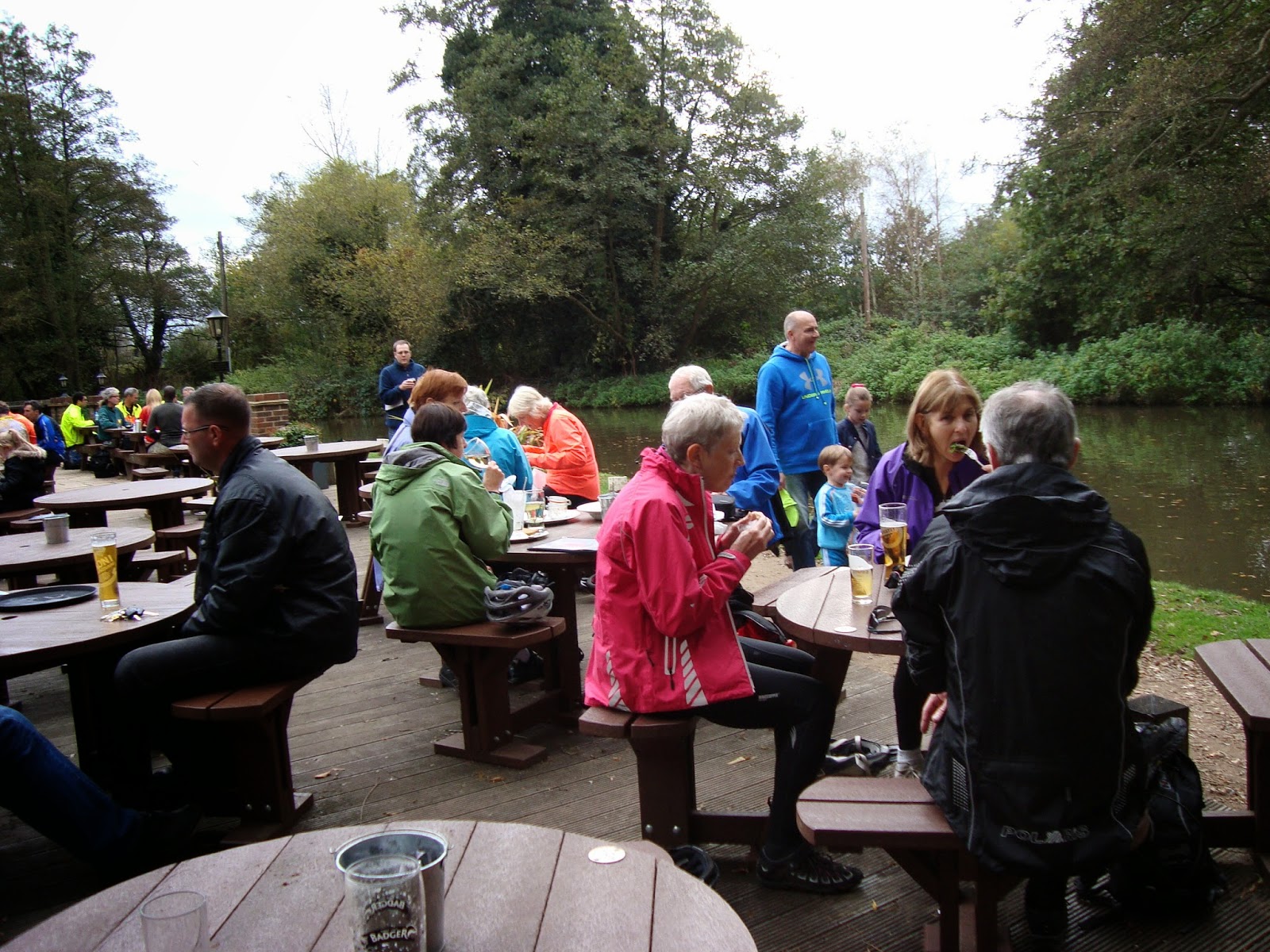 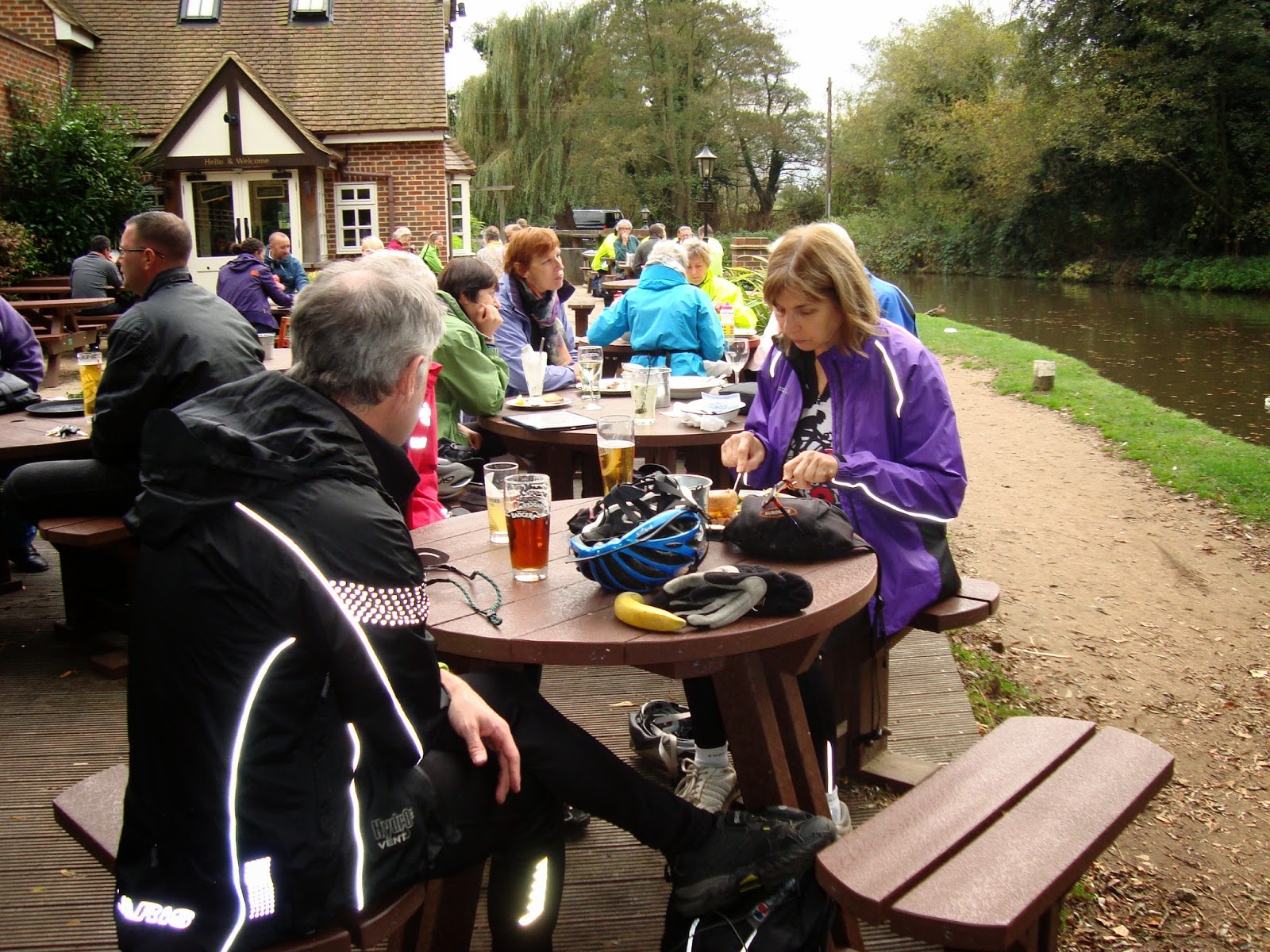 Next Step ride on Sunday 26 October

It was a dry, fairly cloudy morning with showers in the forecast when 10 riders set off from Nonsuch. Through Purley we rode up the short, brutal climb on Foxley Hill road to the parallel cycle route to Whyteleafe South with it's many false flats. Passing new flood relief works in Woldingham Road we turned out the well surfaced track to Woldingham School and Marden Park. This is a steady climb to the head of the valley with its views over the Weald into a headwind, but virtually traffic-free.
We free wheeled down to Bulbeggars (a mythical beast around at night) Lane and around Godstone Village Green to Knights Garden Centre cafe where we more or less took it over as the place seemed rather deserted. Dawn rewarded us with slices of home made Bread pudding and then departed to make her way home using the train.
After a slog up to Bletchingly we descended to a track at the bottom of the Downs to Merstham, where Angie had a rear wheel flat. This repaired with the aid of many helpers we rode up to Fanny's Farm where there was a brief stop for supplies. Interestingly, a news item we saw on the ride which proclaimed "Sheep eat discarded cannabis" referred to sacks of the weed being dumped in a field at the farm. This item of news even made the national dailies and even a paper in Italy!
After the rapid descent to Chipstead Bottom, most diverted up to Banstead, the remainder in slight drizzle going to the Oaks Park Cafe and thence to North Cheam in bright sunshine.
The ride was 33 miles, a good last ride of the Summer season. Thanks to Neil for back marking.      Here is a pic of the group at the head of the Marden Park track. 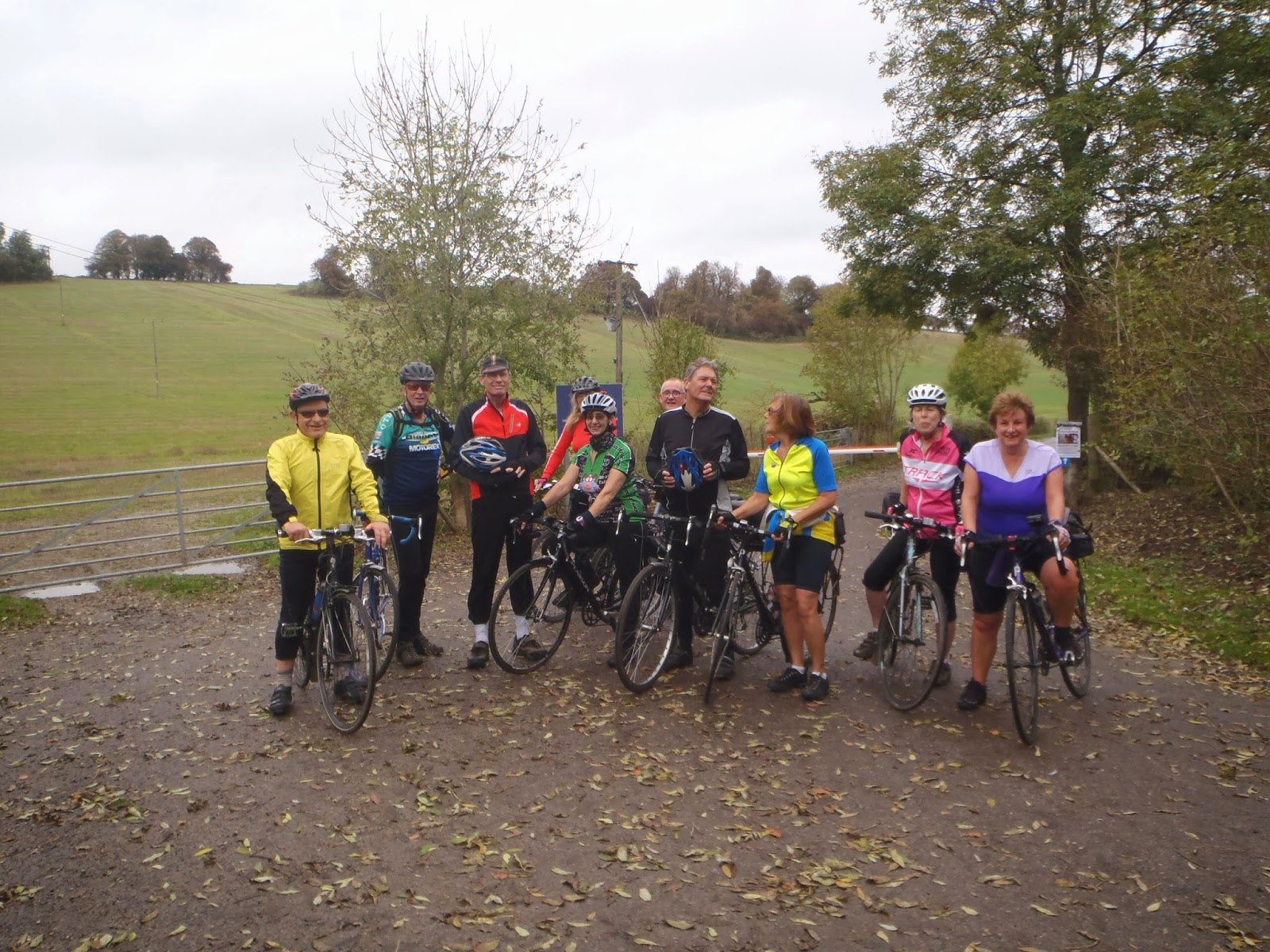 Stephanie's ride to Long Ditton on the 11th October

After a heavy rain shower at 1pm, 24 riders turned up at Nonsuch, a great advance on the previous week. Nigel led a group to Richmond Park, and Stephanie the remaining 16 to Squires at Long Ditton. Sunshine and quite warm throughout for both groups. Here are some pics from Stephanie's ride. 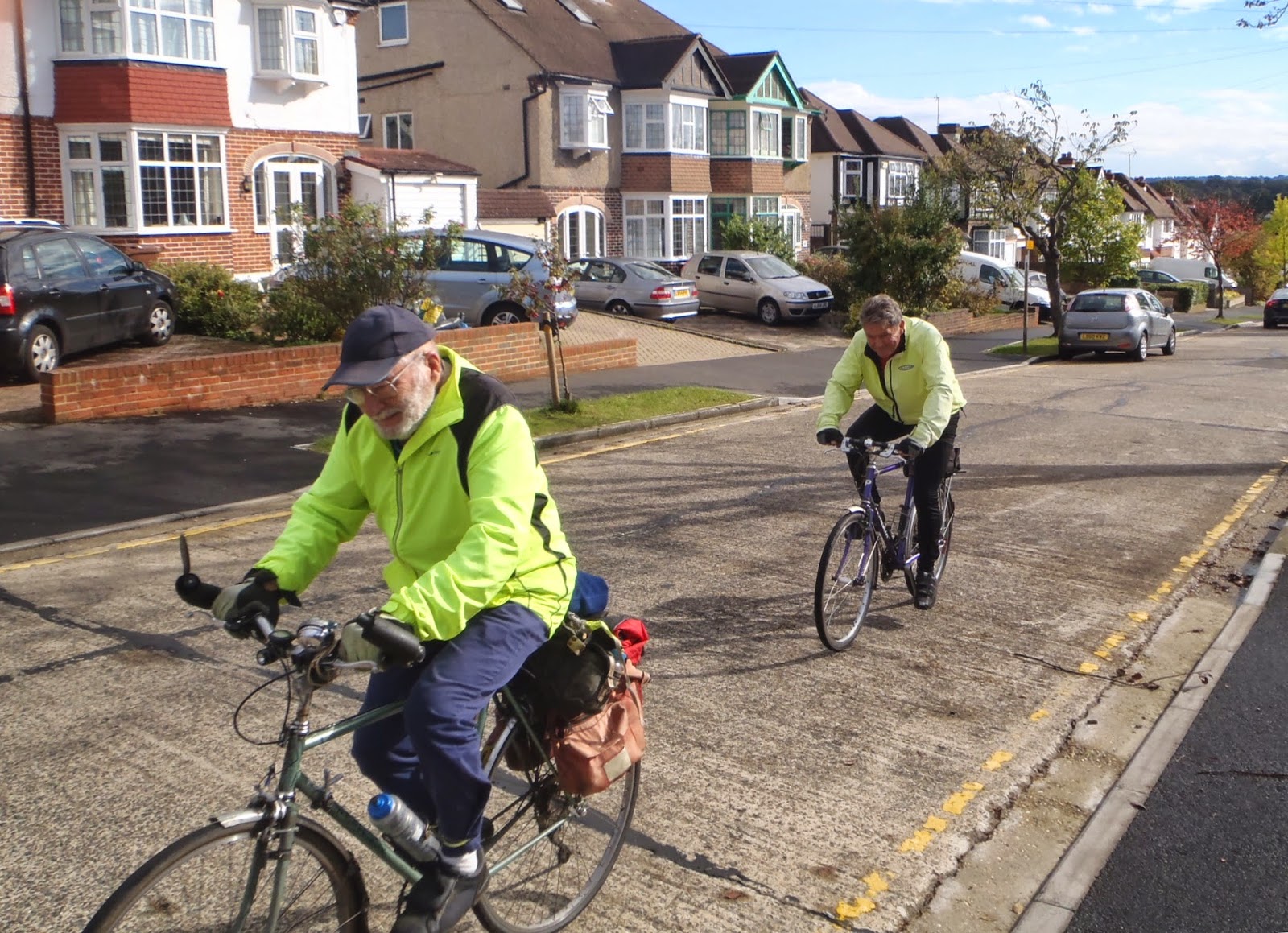 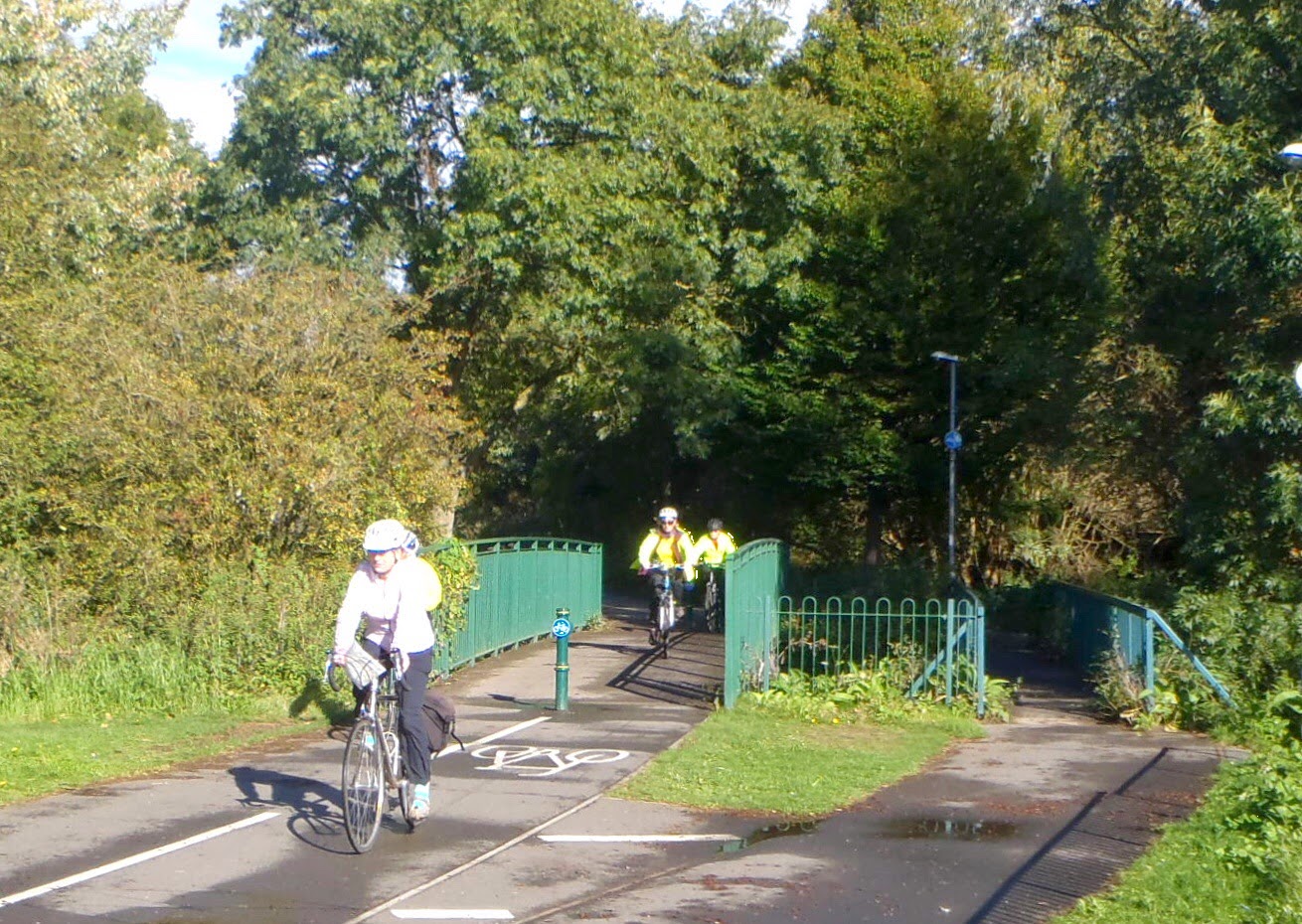 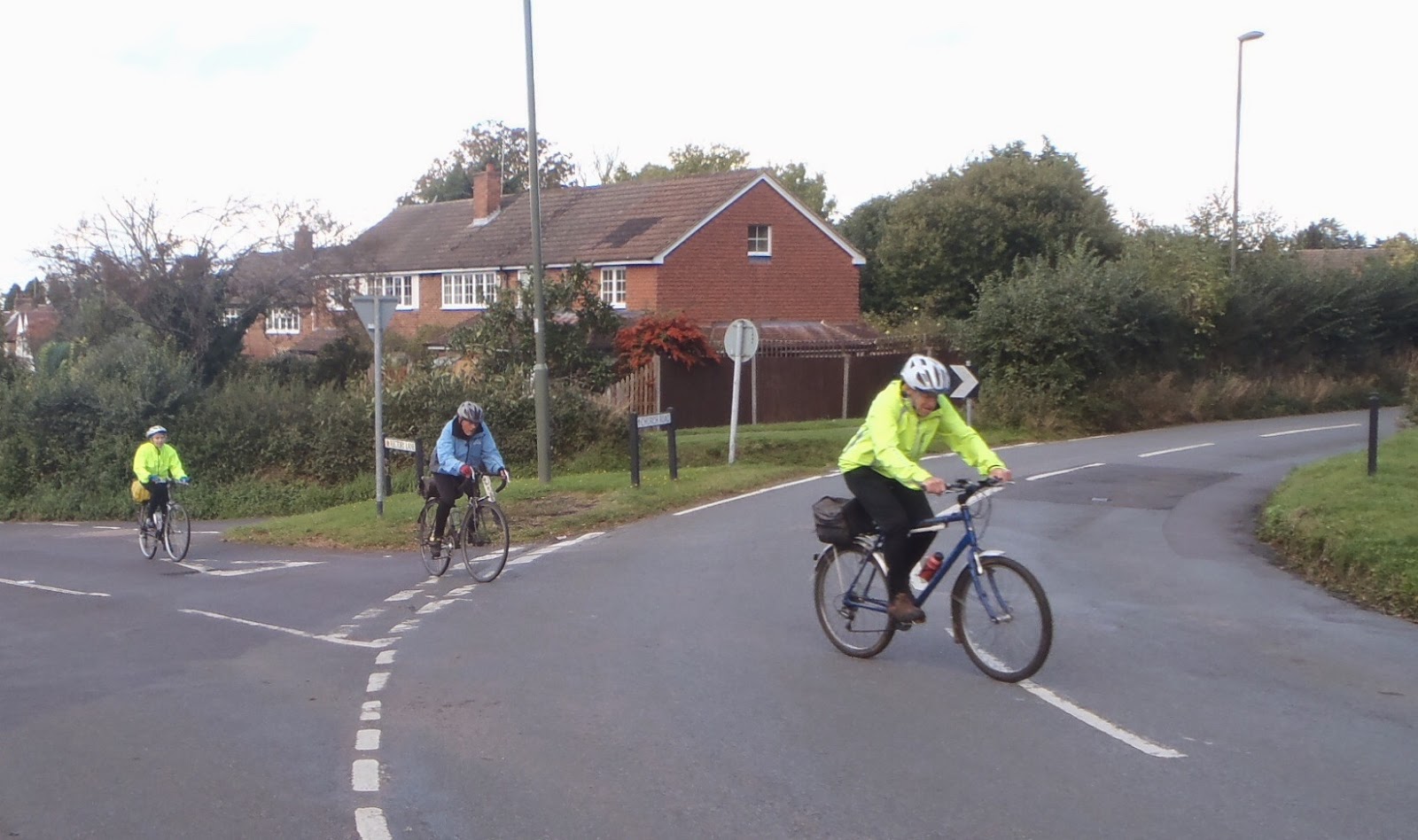 All day ride on Saturday the 18 th October

Meet Nonsuch cafe at 9.50 to leave at 10 for an easy paced ride toGodstone. Riding via Purley, Whytleafe and the beautiful Marden Parkvalley, we will stop at the Garden Centre in Godstone for a middaysnack. The return will be via Bletchingley and Merstham, then up theNorth Downs past Fanny's Farm and Woodmanstern to the cafe at OaksPark.Some short and fairly steep hills are expected, but this is not a raceso walking up them is permitted. Total distance will be about 35miles.
Leader
Harry Cole
Posted by Unknown at 07:46 No comments:

This ride was notable for the fact that, apart from Harry, Nigel, Shirley and Colin, no one turned up at Nonsuch. Admittedly the air temperature had fallen from 19c at 10am to 12c at 2pm and there was steady rain. This was the first proper rain of the autumn and was forecast to last most of the afternoon, so this could have been the reason.
I therefore missed my tea and cake at the Oaks Park cafe , but I did discover that my overtrousers are no longer fully waterproof. We all four went home.
Posted by Unknown at 09:01 1 comment:

Cliff's Next Step ride on Sunday the 28th September

Cliff led 20 riders out to the country on what could turn out to have been the last warm Sunday of the year.  It is good to see John Gould was among them again after his health issues. Here are some pics from the lunch stop. 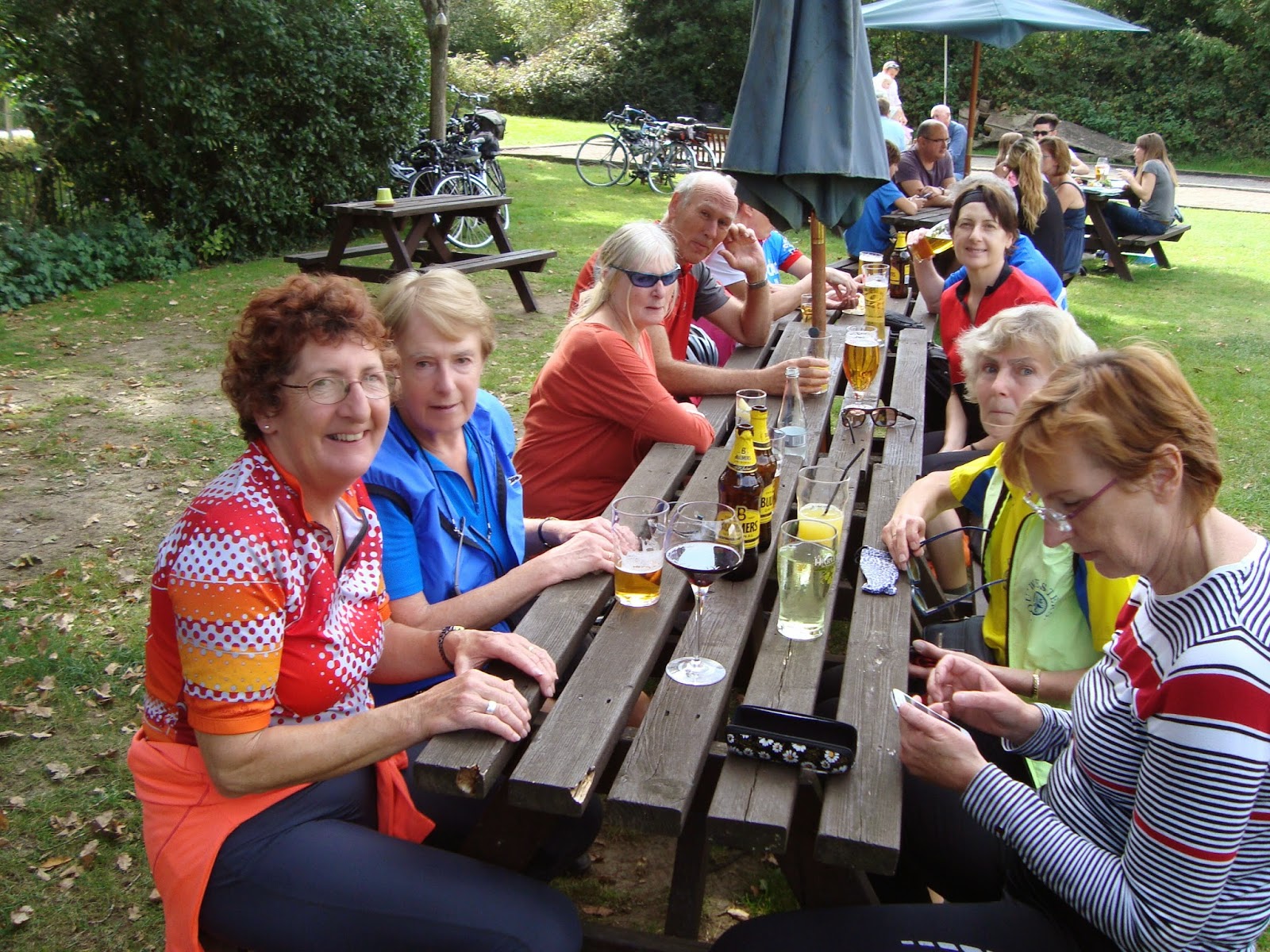 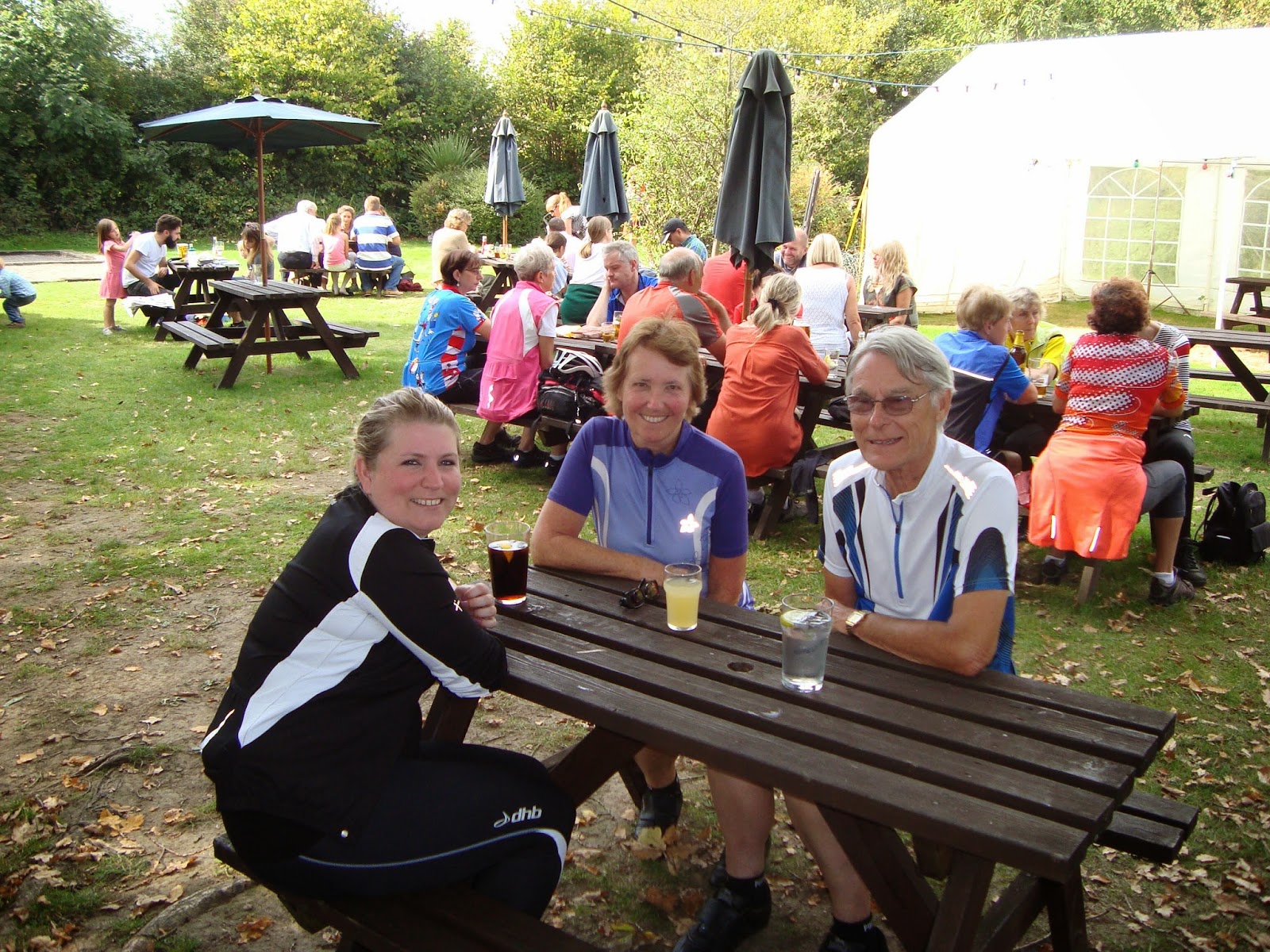 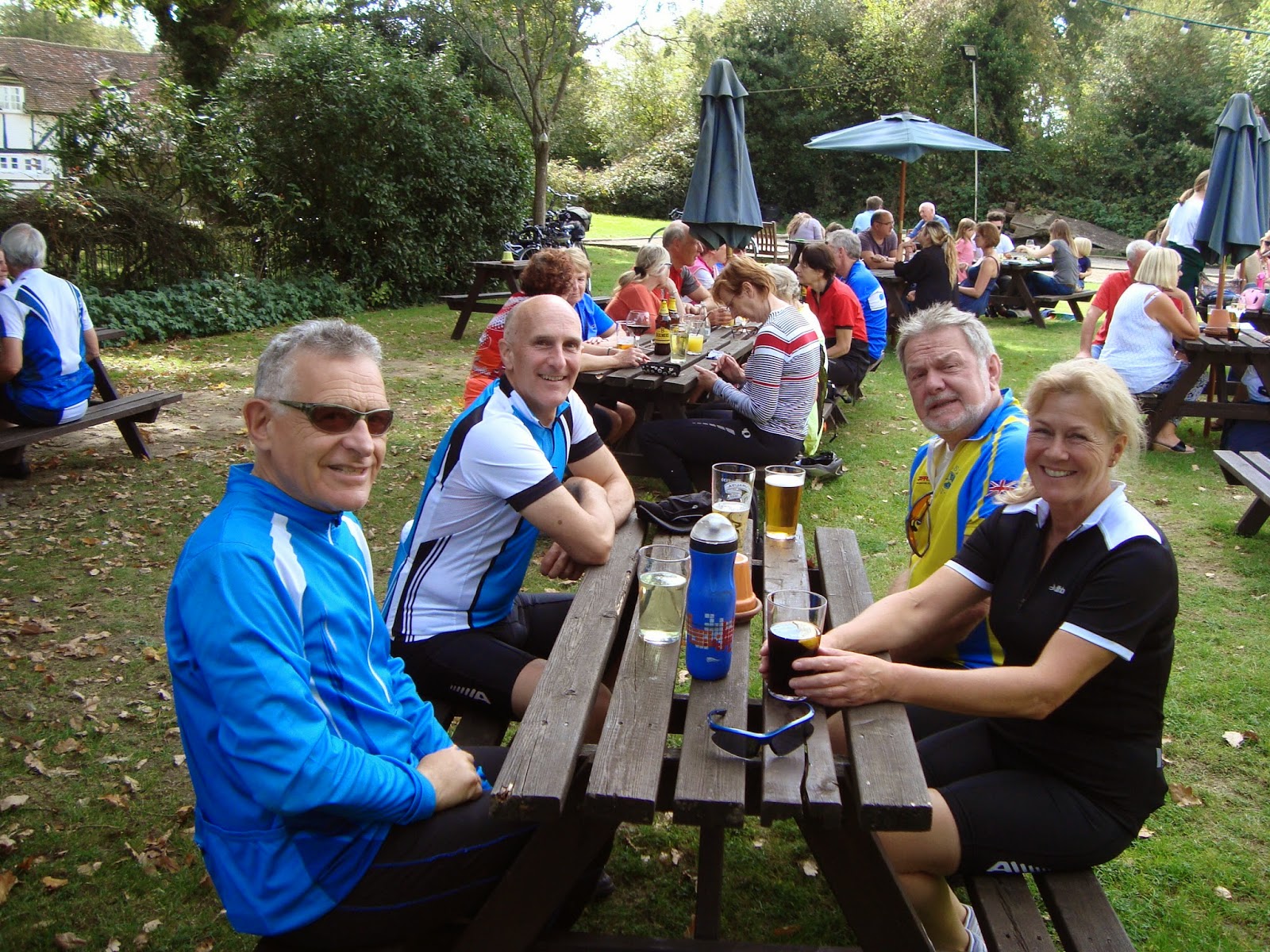