It was gently raining as five determined cyclists met to brave the elements and test the weather forecast of increasing rain as the afternoon progressed. We were pleased to see Callum return to cycling after a short break but he was recovering from a cold and felt that a ride in his direction home was all that he was able to do. We decided therefore to try to meet up with the Nonsuch group who were aiming for Morden Hall Park.

Autumn colours along the Wandle cheered our ride and we were soon parking our bikes and warming up in the cafe. A few minutes later we were joined by the five cyclists from Nonsuch Park.  Were there some comments about our group using up all the parking stands?  The café has now almost entirely filled it's outside area with new garden tables and chairs which sat in the rain empty of customers.
It began to rain more heavily as we left the Park to return home. We agreed the shortest route was best and went our different ways near St Helier hospital at which point the rain became heavier. I was glad to get home and glad I'd worn my wet weather gear!

Posted by Margaret James at 13:05 No comments:


All of you who were unable to attend the AGM missed Paul James' excellent speech to commend Colin for the award of the Arthur Jessop Shield which we present each year to a club member for outstanding achievement and service to the club. And, if you didn't know, you will be equally pleased to learn that the trophy was presented to Shirley last year. David Aylett was awarded the prize in 2015. Here is the text of Paul's encomium:

"There is only one man in this room who was actually born on a bicycle, wrapped in hi-viz swaddling clothes and placed in the sidecar to his parents’ tandem where he spent his early childhood.

With his parents he was in at the founding of the South West London District association in 1948.

He became a National councillor for the CTC in 1964.  It was on the organising committee of the British Cycle Touring Competition that he met his wife.

From leading rides for fellow schoolboys he graduated to Chairman and President of the SW London District Association and National Vice President of the CTC.  He has never been one to sit back and take a free ride.

I first bought a bike only six years ago so my experience of him has been in his recent years, involved on nearly every Beginners Section ride I have known.

Thanks partly to persistent leafleting the Beddington Park rides are now growing in popularity and introduce cycling newcomers to the club but a couple of years ago hardly anyone came and this man was sceptical about their future.

But we asked him to stick with it.  He said he would and since then, rain or shine and one week snow, slush and ice, many times taking out only two or three of us, he was there every month by the Pavilion at two o clock just as he said he would be and despite his own doubts.

The committee was astonished to realise that his name was not on the Arthur Jessop trophy already and felt, albeit belatedly, that this omission should be rectified.  I am talking of course of Colin Quemby."

Please be on time.

The new venue is just a short walk from the Queens Road exit from the Day Centre. 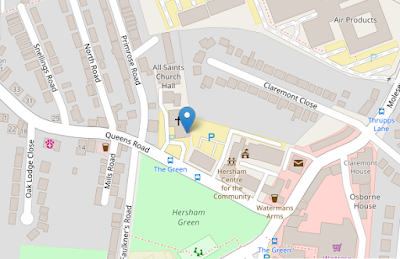 The hall is located at the back of the premises. There are two halls with a shared entrance. Our meeting is in the Small Hall.

There are no bike racks but there is plenty of space to park bikes against the buildings near the hall entrance. Please bring your bikes to the hall rather than leave them at the Day Centre.

There are normally plenty of spaces on the premises in front of the church for anyone arriving by motor vehicle, with access from Queens Road.