The fingers and toes were already chilling, the damp leaves lying across the paths to turn the slightest skid into a painful spill, the wind biting across Beddington Park and the skies threatening rain of the coldest, dampest sort.  But there was a heartening turnout as Maggie and I coasted down to the Pavilion Cafe on a day we had said to ourselves "Why are we doing this?" as we put on your fourth layer and tried to persuade numb, ungloved fingers to stretch that stupid black rubber band that nowadays keeps your rechargeable light attached to the bike.  Isn't technology supposed to offer progress?

Colin, of course, has always been there in the wind, rain and snow and managed it again, despite domestic duties.  Anna and Roger can be relied upon so long as they remember it's the third Saturday and they need not to Go West from home, like a boy band, but to turn East like Phileas Fogg.  Ken had told us he would be there, well wrapped up; he's marched with the Guards in more miserable weather than this.  But there was Frank, a regular at Nonsuch and Easy Riders but an infrequent visitor to Beddington Park, and we had just overtaken Jackie, breaking in her new bike, and then Paul B came along to make it eight.

Weighing up the length of the day, the opportunity for more than a short pedal up to The Smallholdings, and the need for a bit of a change, and the likelihood of off road mud, we elected to go on Colin's route to Elmers End.  Colin led and I back-marked.  A decent ride it was, too, with the traffic surprisingly light and the rain, kindly but only just, holding off; Beddington Church, West Croydon, Selhurst Station, Croydon Arena, South Norwood Country Park and then a quarter of a mile of the unavoidable busy roads that take us to our destination, Branching Out, the pleasant cafe with the bestest cakes, on Eden Park Avenue.  Eight surprise customers on a darkening winter afternoon!  They must have though that Christmas had come again.

Back through The Glade and Woodmere Avenue and Shirley Oaks and Glenthorne Road and the posh bit of Addiscombe, North of Lloyd Park and then a new and very exciting route through the middle of Croydon on Market Day back to Wandle Park and Beddington Church.

Two-o-clock is a bit late to be starting at this time of year, but it is the tradition, and we also chatted a bit too much before departing.  And we had probably overestimated the likely pace.  The result was an end to the ride a bit darker and colder than we would really have liked with Beginners.  But, hey, we all got out and did some exercise, and the cakes were truly scrumptious.

Posted by Margaret James at 02:33 No comments:

Invitation to enter the 2021 Photo Competition

We managed to pack a lot of excellent cycling into 2021 despite the complications. And I know that many of you were busy with your cameras and phones recording the antics of your lycra clad friends and snapping the scenes which motivate us to get out and ride our bikes in all weathers.

Please submit your photos before the end of January using this method:

Click on 'Add files' to select the source of your photos then select your photos (or folders), or if you already have your file list open just drag and drop photos from the list into the white box.

Once you have selected one or several photos fill in your name and email address then click 'Upload'.

Send an email to me, Tim, to provide this important information about each photo:

the photo filename (e.g. P1040276.jpg)
a caption which we will inscribe on your photo
the competition category (see below)

The rules and categories are simple. The full 'Competition Rules' document is available under the 'Information Hub' heading on our website.

Your photos must all illustrate a connection to cycling by depicting a bicycle or cyclist for example, or some obvious cycling association.

You may submit two photos in each category:

Note that the award for a winning photograph in each category will be given to the photographer who took the picture, not to the model(s).

This method for submitting photos should work with any device (PC, Apple, iPad, iPhone, Tablet or Android phone) but if it doesn't work for you, please let me know so that we can address the problem. It does depend on you being able to locate the folder where you store your photos. It does not require you to install the DropBox app.

This is the best way of sending photos. Please note that some methods of transmitting photos, such as WhatsApp, shrink the photo before sending, diminishing the quality of the original photo as it is in your camera or phone.

Now I can sit back and await the cheerful tinkling sound your photos make when they land in my DropBox.

Cheam and Morden did not run their traditional New Year's Day ride to the Roehampton Gate cafe in Richmond Park because it did not seem wise in the context of the huge surge of Covid cases and the large crowd that traditionally gathers there.

A few of us wanted to ride something close to the traditional ride but more safely; a half dozen or so C Group regulars had gone from Worcester Park earlier in the morning, and Ken, Roger, Anna, Maggie and I met in Sutton centre at eleven.

We picked up Sue B at Green Lane and made our way through Old Malden and New Malden, up Traps Lane and into Richmond Park through Ladderstile Ride.  The Park was full of zooming cyclists and families out walking and who should we pass almost as soon as we set out along Broomfield Hill but Chairman Dave, cheerily travelling in the opposite direction!

Down to Robin Hood Gate we cycled past Roehampton Gate (the queues there, in fact, were no worse than on a normal Saturday), then Westwards along the approach to Sawyer's Hill, but turning left up past the Ballet School (where the queue at the cafe was ridiculous) and West through the middle of the Park over the top to Ham Gate. 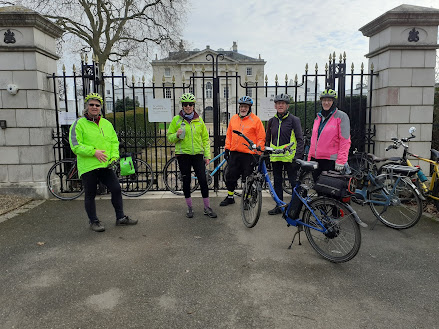 At the Ballet School

Down the hill to Ham and then we used the cycle path off Northweald Lane to reach the river and the Thames Cycle Path to go under Kingston Bridge and into the market place.  There, after a bit of Government-style indecision, we ended up in a sparsely populated square eating Turkish wraps (which were splendid) with our tea in a place we could watch our bikes; essential in Kingston.

Posted by Margaret James at 14:51 No comments: