Ride to Chiswick House on Saturday the 21st November

After dire weather forecasts for snow showers and freezing gales, it was a relief to arrive at Morden Hall NT cafe at 1015 to find the sun peeping through the clouds and four hardy riders, Tim, Toni, Dave and Stephanie well wrapped up and ready for the off.  The wind, however, was nearer to the forecast speed and was right in the face for the ride down the Wandle Trail to the mouth of the Wandle in Wandsworth.
Luckily the route is fairly sheltered until you get to the tower blocks and road works in Wandsworth Town Centre where a major rebuilding is taking place on the site of the former Ram Brewery. Wandle mouth spit saw Toni briefly slip up on wet wooden boards by the entrance. This is a draughty spot with new luxury flats and the old Wandsworth dump on each side, though no deterrent to the numerous waterfowl. We then rode along the Thames Bank through Wandsworth Park to Putney Bridge and the more sheltered side of the Thames in Fulham Palace Park.
After a brief detour to admire the hidden gem of Fulham Palace we rode past Fulham FC ground and onto the riverside path, where the wind was so strong that cormorants were having to work hard to fly against it. The sun was now fully out and once we turned the corner under Hammersmith Bridge it could even be described as warm out of the wind. The ride along the river to Chiswick old church is very scenic and always bustling with activity with the rowing clubs getting ready to venture out on the water and in no time we arrived at Chiswick House and garden and the excellent cafe which was nice and warm.
Finishing our snack, we did a brief circuit of the gardens and the historic camellias in the glasshouse before continuing along through Dukes meadow to Chiswick Bridge, which we crossed and joined the Thames Path on the south side of the river. We turned off by the National Archive building and rode through back streets past Kew station to the rugby club entrance by Twickenham Bridge where fans were making their way to a match. Richmond Green was full of people enjoying the sunshine, as was the riverside at Richmond with the wind falling lighter and from behind. This presaged a cold night to come and after riding along the bottom of Richmond Park to New Malden we ended the ride after 25 miles at 2.45 pm.
Stephanie took a photo of us hiding out of the wind in the glasshouse at Chiswick House, where, as you can see, the Camellias are already in flower. 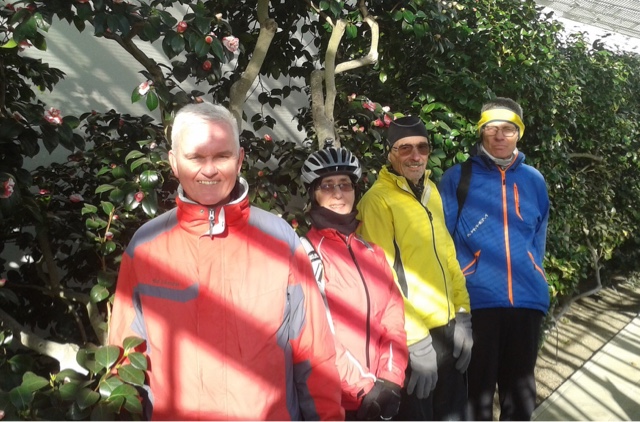