There was a chilly wind today as Colin led 11 cyclists from Beddington Park to Oaks Park via the well heeled Webb Estate in Purley.   The Webb Estate, in which Francis Rossi of Status Quo lives, is governed by a list of rules and one of these forbids the wearing of shorts! Luckily there were no residents to lock the offending Sou'westers  in the stocks by The Green.  Secure in numbers we briefly stopped by the original Lord Roberts temperance pub to discover a  new cafe open for business and the thought of tea and cake was tempting. There was no stopping here though, perhaps another day, we crossed the A253 to make our way to climb briefly but steeply up Manor Hill, Woodmansterne. From there we enjoyed the gentle downhill run to meet up with the cyclists from Nonsuch for well earned sustenance.

Our return cycle took us through the small holdings in Carshalton and distracted by a bird watcher we nearly left behind one of our number whose chain had come off.  Having regrouped we successfully made our separate ways home everyone appreciating the new cycle friendly crossing outside Carshalton Park.

Posted by Margaret James at 02:38 No comments:

A beginners ride will leave from The Pavilion Cafe, Beddington Park at 2pm on Saturday.


Posted by Margaret James at 09:27 No comments:

Twenty riders enjoyed a fine day out cycling to Osterley Park for lunch, then back down The Grand Union Canal through Syon Park and onto Richmond Park for tea.

Thanks to Alice for back marking although we nearly lost her! 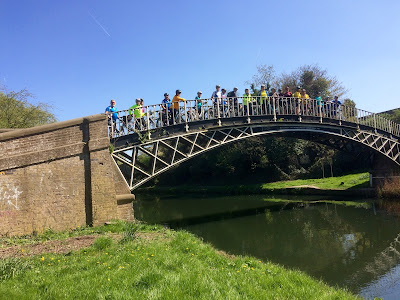 Paul Scully,  MP for Sutton and Cheam, welcomed 25 members of the club on this sunny April afternoon.  Speech made, group photos taken, two groups set off. The short ride to Bike Beans café, Ashstead was accompanied by Mr Scully who observed that the combination of a heavy downpour of rain while tackling the hill behind Epsom hospital was more than he had been elected to face! However, he was still smiling as he left Nonsuch Park at the end of the ride and we almost got a promise that he would join us again. A politician's promise maybe but we'll wait to see. Mr Scully had the previous week been in the Houses of Parliament when the lock down occurred following the harrowing episode on Westminster bridge and prior to becoming an MP had experienced an earthquake in Bangladesh when again for his own safety he was secured in a room. Cycling with Sou'westers  was clearly a liberating experience.
Meanwhile 10 cyclists on the slightly longer ride to Richmond Park enjoyed sunshine and only a few drops of rain. We sat outside in the sun and enjoyed tea, cake and ice cream. Congratulations to the 2 cyclists on their first long ride. The deer and a fairly steep downhill road within the park were enjoyed in varying degrees by the group. Thanks to Liz for her impromptu leadership. 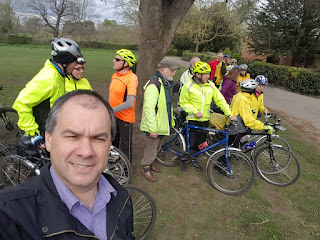 Maureen Gallichan will be leading a ride on 10th June from Nonsuch Park to Charlwood.

Morning Coffee will be at Walton-on-the Hill, Lunch at Charlwood and Tea at Leatherhead.

The ride will depart at at 9:30am and return to Nonsuch Park

Tony
Posted by CTC South West London at 04:15 No comments: