It was a pleasant surprise to see so many braved the cold on the 16th January. Luckily there was no wind and it was even possible to detect some warmth in the sun if you faced it and stood still. David was wearing headgear, but Anna had only a bandana. I failed to get a photo of David's headgear unfortunately.
We set off across Morden Hall Park and threaded our way through the backstreets of Mitcham  and Tooting to Tooting Common. Here the dividing line on the shared footpath has been removed with the odd sign asking people to be considerate. Apparently there used to be a lot of conflict between walkers and cyclists as each group claimed ownership of their particular lane. With this solution people are trusted to behave responsibly.
After the common we went up Streatham Hill and down to Dulwich Park which, as usual on a Saturday, was crowded with all sorts taking exercise and thence on the long downhill stretch to Peckham Rye cafe and much needed warmth with sustenance.
Wrenching ourselves back into the cold we rode past Nunhead Cemetery and up to Telegraph Park with great views of the city and points west, Big Ben barely visible throug the tower blocks springing up in South London. Back down quiet backstreets to Peckham Rye Lane and its cosmopolitan crowds we then crossed by the Library to the cycle path along the old canal which ran to Surrey Quays, an oasis of green between housing estates
We turned into Burgess Park, built along the line of another canal where Mike recalled living and going to school and at the end turned of into Addington Square, another fragment of early Victorain London with its grand terraces. Next to this is an establishment called after Steptoe and Son, which is true to the TV series of the 60's and defies description.
After negotiating a very urban stretch across four main roads we arrived at Route 3 and the pleasant stretch through Lansdowne Gardens and Larkhall Rise.
Here the group split and the remainder went down to Battersea Park and a ride along the Thames to Wandsworth. This is a building site with both the Ram Brewery and Southside being redeveloped but behind it runs the Wandle Trail which we followed back to Morden Hall Park Cafe where the ride finished with welcome hot drinks and cake. By now the temperature was plummeting.
I recorded 29 miles with no mechanicals or flats. Many thanks to Tony for back marking.
Photos are by David. 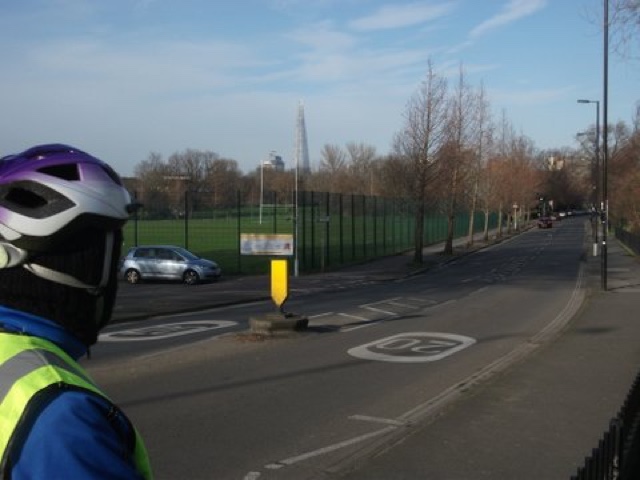 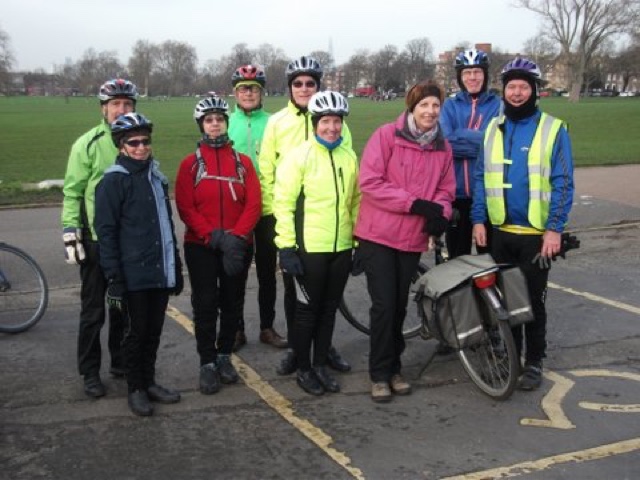 All day ride on Saturday 16th.


"The all day intermediate ride on Saturday the 16th January will
depart from outside the National Trust cafe in Morden Hall Park at
1030am. We will head in an easterly direction aiming to visit as many
South London Parks as possible and returning up the Wandle Trail to
Morden Hall Park by 4pm. We will stop for a break in Peckham Rye.
This is an entirely urban ride at an easy pace with the occasional
hilly bit near the start towards Streatham. In the event of extreme
bad weather, the route may be altered."
Posted by Unknown at 23:01 No comments: