Meet at Fairlands Park, next door to North Cheam Sainsbury, at 7 pm for an easy social ride along local waterways, Beverly Brook and back along Hogsmill river. Returning to the Park by 9 pm. All welcome.
Posted by Helen Tovey at 15:22 No comments: 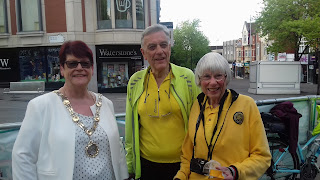 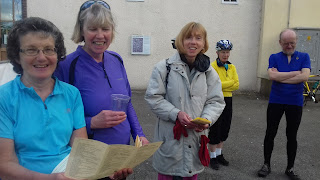 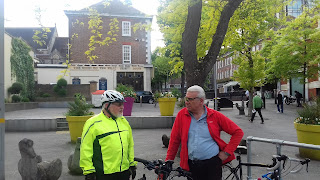 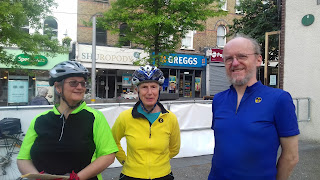 Sutton's new Lady Mayoress met Shirley and Colin Quemby (top photo) and cyclists in Trinity Square to launch the 30th annual Cloverleaf rides at 7 pm last Tuesday. She stopped and chatted with us all for a while.  It was a lovely warm and sunny evening - perfect cycling weather - and ten of us met to enjoy a couple of leisure rides around Sutton.
Five circular routes are provided; after brief discussion it was agreed to head for the Park Farm area, lead by Sue. The roads were generally quiet by this time of the evening and the ride was most enjoyable.  After a sociable break back at the square, most set off for another ride, this time to Rose Hill and back, aiming to return by 9 pm.
The Cloverleaf Rides kick off a summer of evening leisure rides which take place from 7-9 pm on various evenings and from various meeting places around the borough. Further details from this website https://www.cyclism.org.uk/
I would just like to add thanks to our excellent Dr Bike, Jim, (far right in the final photo, above) who gave my bike a thorough and expert check.  He advised me that I needed a new front wheel and brakes and adjusted several bolts and screws on the pannier rack, which no longer rattles and rolls... I cycled home very carefully afterwards, have had the suggested work carried out, and look forward to a much safer and quieter ride this Saturday !
Posted by Helen Tovey at 15:13 No comments: 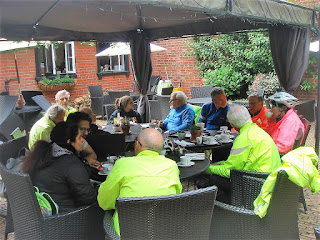 Tea at The Coach House cafe

Three  new cyclists on brand new bikes made it thirteen in the group this month. Nervous and fairly inexperienced they were reassured that our routes were mainly off road or through quiet lanes and byways. There is also safety in numbers of course. However,  Coombe Wood is on the other side of Croydon and try as you might eventually you have to face central Croydon on a busy Saturday afternoon. Fresh in our minds the story of the tram driver asleep at the wheel not far from where we were about to cycle. But George Street was empty of vehicles as we headed towards East Croydon station and we turned right towards the Law Courts, two of us remembering long weeks of Jury service there last year. Then the gentle uphill through  Park Hill Park where our newcomers may have thought they deserved tea but we had more mileage to go and Lloyd Park to navigate. One of our more experienced cyclists meeting the mud knee first and the rest of us deciding to dismount for the tree roots and muddy patches. Then a short cycle down Coombe Lane to the Coach House cafe in Coombe Wood. Very timely as the rain now arrived but we all sat in comfort in the back garden under cover and recuperated before another exciting off road experience through a muddy Coombe Wood on the return journey. 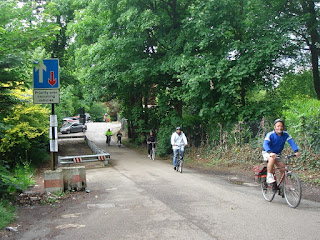 Entering Coombe Wood on the way home
Posted by Margaret James at 09:13 No comments:

Greenwich all day ride 13 May

Our day out began quite warm and muggy outside the NT café at Morden Hall Park,  and within half an hour most of us had shed our jackets to continue in comfort over the route Harry had planned for us.  South London is quite hilly but we were following generally peaceful byways and cycle routes, and so many parks and green spaces it was sometimes hard to believe we were traversing the city! Streatham Hill, Dulwich Park and Peckham Rye (where we had a short comfort break but no coffee as the queue was ridiculous...) passed pleasantly with all in their spring finery of flowering horse chestnuts and bright, recently unfolded greenery.﻿﻿﻿﻿﻿﻿﻿﻿﻿﻿﻿﻿﻿﻿﻿﻿﻿﻿﻿
﻿

Telegraph Hill gave us our best morning view of the City, though it was quite overcast at that stage of the day. ﻿﻿﻿﻿﻿
﻿﻿
﻿﻿﻿﻿﻿
﻿﻿﻿﻿﻿﻿﻿﻿﻿﻿
Passing along the river via Deptford, we stopped off at a memorial statue of Peter the Great of Russia, who spent several months in London studying shipbuilding - a little known episode of our city's history. The statue is now surrounded by riverside apartments but was once the heart of the shipbuilding industry.
We arrived at the Cutty Sark in Greenwich in good time, about 12 o'clock, so had an hour for our lunch break. It was a bit cooler by the river - and as usual on a Saturday, there were many people about. Some of us had brought packed lunches, some lunched in the Royal College and others found food in the market or other local cafes.  We all gathered by the Cutty Sark again before setting off on our afternoon travels. This started with the ride up to the Observatory - not a huge climb but a challenge to some of us straight from lunch! Still the wonderful view of the Isle of Dogs and Canary Wharf (below) was more than enough reward.
Our return ride across Blackheath and down to the Waterlink Way was easier going and we were able to keep a good pace for a few miles, until we came to Crystal Palace.  David and Godfrey peeled off at this point, while the rest of us made our way to the top of the Park for a spectacular view over SE London, through to the QE2 bridge and Kentish North Downs.  By this time most of the lowering clouds had disappeared, the air was clearer and we were enjoying bright sunshine. Then Harry lead us back via Norwood Grove formal gardens and a vibrant little Saturday market to the splendid Rookery Café on Streatham Hill for well-deserved tea and cake, before heading further downhill and back to Morden Hall Park by about 4.15 to finish.
Many thanks Harry for an amazing day out and exploration of beautiful and interesting corners of our city. And thank you everyone for being such good company along the way.

A few photos of our Saturday riders on Beginners rides this spring.. 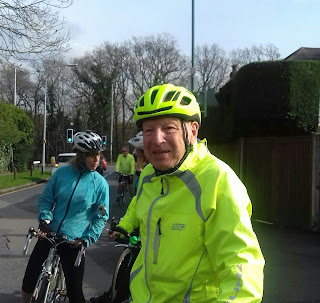 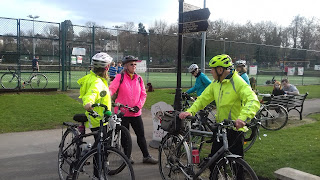 Godfrey lead us to Wimbledon Park for tea one bright Saturday in March... 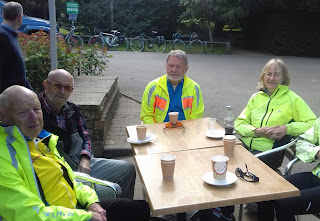 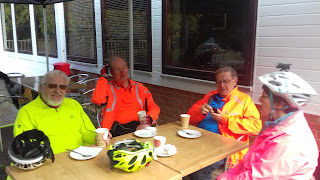 Stephanie lead us via Belmont and Sutton Lane up to Oaks Park café on another fine afternoon in April, where we met riders from Beddington Park... 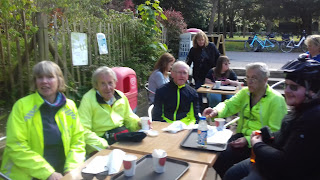 And Sue (below) lead us on a wonderfully green circular route through the Hogsmill Conservation area all the way to Chessington, then through Horton Park for tea at the Moat House Garden Centre café  on 22 April.﻿ 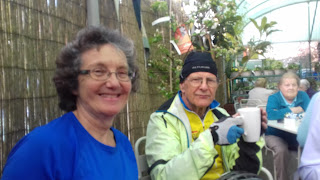 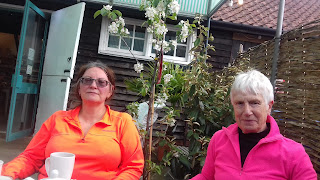 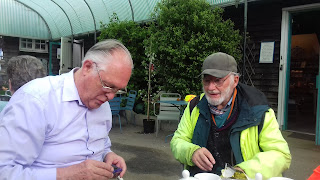 Ride to Greenwich this Saturday the 13th

We will start from Morden Hall Park outside the Garden Centre, cross the park and ride through Tooting to the Common. Partly up Sreatham Hill and down to Dulwich Park. Thence to Peckham Rye and onto Greenwich via Deptford.
After a snack we will ride up Greenwich Hill for the view and then cross over to Blackheath Common and descend to the Waterlink Way. We will follow this to Kent House  and then ride up to Crystal Palace Park and more views. Return to Morden Hall Park will be via Streatham Common and Mitcham.
This route is hilly in places, and will be about 30-35 miles in length.
Harry
Posted by Unknown at 01:00 No comments: