Eight people signed up for Saturday's ride along the Wandle Trail from Beddington Park as part of Wandle Fortnight. Colin, Ken, Paul & Maggie duly waited outside the Pavilion cafe but no one arrived. However, an unsuspecting Mulah, sitting resting on a bench with her new bike, agreed to join us.

Mulah had been cycling around Beddington Park regularly in order to become a more confident cyclist so that she could reduce the time it took her to get to work. As yet she hadn't cycled on or across roads.

After an adjustment to her saddle we set off slowly through the park to follow the Wandle trail. As Mulah became more confident we crossed the London Road in Hackbridge and made our way through Butter Hill. By the time we got to Morden Hall park, spotting Stephanie avoiding the Nonsuch ride with small children, Mulah was happy and smiling.


Our return ride was uneventful and we established that Mulah had cycled twice as far as she had cycled before.  One very happy cyclist whom we hope to see next month.

Posted by Margaret James at 11:28 No comments:

Report for the ride on 8th September

Eleven riders left Kingston for Runnymede, stopped for elevenses at Walton Bridge then onto Egham. We had lunch at the National Trust café, then checked out the Jurors artwork chairs. Headed back along the Thames to The Walled Garden for tea. The weather was kind. Thanks to Maureen for back marking and to the corner markers. 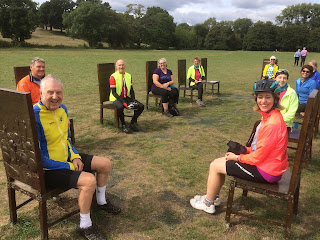 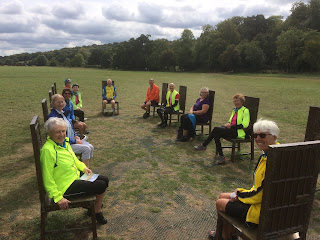 See this route on Strava