Message from David Aylett to all CTC members

“If you are member of the CTC you may not be aware that the club is undergoing what some may believe to be growing pains.  Some of us feel that we are passing a turning point and that you as a member should be aware of what is happening, not necessarily as is depicted in our club magazine.

To some of us replacement of a technical man with a salesman is not a step in the right direction.  Please see our district secretary’s note dated Saturday 24 January 2015 headed Important Issues in the Wayfarers Blog at cyclingswlondon.org.uk, below Harry’s Beginners blog.

Having read his points and leads to correspondence on the matter, please let me know by email on davidaylett@talktalk.net if you support those of us that are upset by the actions our directors are taking.
Posted by Unknown at 08:15 No comments: 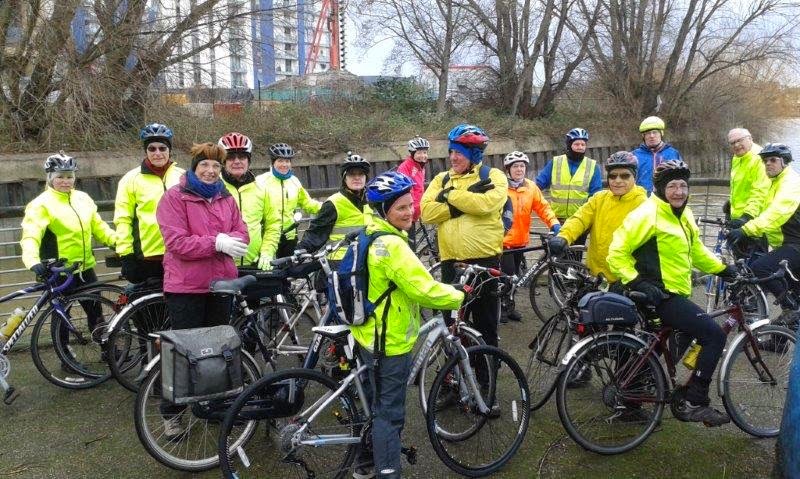 Ride to Chiswick Park on Saturday the 17th January

Rides at this time of year can be ruined by bad weather, so I was more than surprised to see 17 riders at Morden Hall Park. This despite the freezing temperature and forecast of some rain or sleet showers.  However there was almost no wind and we swiftly exited the Park by the Phipps Bridge  tram stop to avoid the muddiest part of the Wandle Trail, rejoining it at Merton Abbey Mills. Apart from the trafficky bit through Earlsfield and a short sleet shower, we headed down to Wandsworth Town Centre where we ran into road works and evidence of a massive building boom. The former Ram Brewery site is being turned into, guess what, luxury flats, though a piazza area is planned where the Wandle goes through the site. At the mouth of the Wandle we paused briefly for Neil to take a group photo and then crossed Wandsworth Bridge to circumnavigate Hurlingham Park to Bishop's Park in Fulham, a place full of historical interest and children playing football on a very muddy field.
The sun was out by now and we then rode along the Thames Path, Furnival Gardens and Chiswick Mall to Chiswick Park cafe, where we met Stephanie who had mistakenly gone to Nonsuch Park for the start. After a snack some of us decided to head back with Stephanie and some went for a short walk around the famous gardens in bright sunshine.
Two more riders, Patricia and Steve then joined us, having arrived late at the start and sadly too late for a snack before setting off along the Thames through Dukes Meadows to Chiswick Bridge, which was in the process of being repaired, so requiring some careful riding, and along the South Bank of the Thames to the National Archive. The back roads through Kew were pleasantly quiet despite the jets thundering overhead and we halted briefly by Richmond Green and the gatehouse of the former Tudor Palace. Along the riverfront in Richmond we dodged the strollers and made our way to the Ham Gate into Richmond Park, where Angie remarked that she hadn't changed gear once since we began the ride. Along the Tamsin trail, quite dry for the time of year, we headed to Kingston gate before dispersing in New Malden.
Many thanks to Tony for back marking. We had no flats or mechanical breakdowns this time. I did 28 miles from home overall and got back spot on 3pm. Next time I will start a bit later as the cafe at Morden Hall Park only opens at 10am.
Posted by Unknown at 07:54 No comments:

Details of the competition for 2014 are on the Wayfarers  Blog. The closing date for entries is the end of January.
Posted by Unknown at 11:28 No comments:

Day ride to Chiswick Park on Saturday the 17th January

" This ride will start from outside the NT cafe in Morden Hall Park at10am. We will then ride down the Wandle Trail to the Thames atWandsworth, and cross Wandsworth Bridge to the North Bank of theriver. Passing Hurlingham Gardens and going under Putney Bridge, wewill pause at Fulham Palace before continuing up the river past FulhamFootball Ground, Hammersmith Bridge and Chiswick Mall before stoppingfor a snack at the cafe in the grounds of Chiswick House. Later we will continue up the river to Chiswick Bridge where we willcross over and continue on the South Bank to the National Archive atKew where we will then go inland past Kew to Richmond Green. Thenalong to Ham and the track along the bottom of Richmond Park toKingston Gate, Norbiton and ending after the A3 underpass at MaldenManor. There are no hills on this route and only short sections on roads.The distance will be about 30 miles at an easy pace, finishing I guessat around 3.30 pm."