Dawn has been coming to the Beginners since 2000, and has been a leader since 2006. She thinks this is what you should do as a regular and enjoys finding new routes and general exploring.
In her view, keeping the group together, being friendly and welcoming and knowing the route are important when leading a ride. She especially likes being near water, such as the Thames by Kingston ,but has no particular favourite cafe.
She owns one bike, a purple tourer made by Pearson's with 27 gears, bought in 2005. When she started she rode a bike made from various parts by the late Tom Fiddimore, a stalwart member of the Beginners. 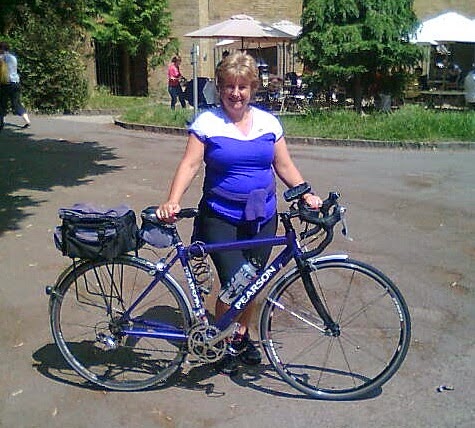 Tony' s ride to the coast on the 19th. Further stuff.

This ride was notable from my point of view for three reasons, one revealing, two alarming and one humiliating.
The first, and something that almost always happens when I go on a ride lead by someone else, is finding a new route to a familiar destination. In this case a cut-through from Tadworth to Walton on the Hill via the Avenue, Motts Hill Lane and Withybed Corner. This neatly avoids the busy St Mere Road and comes out by the Mere Pond. I will use this one again thanks to Tony's local knowledge.
The second was my first experience of shimmying, aka speed wobble, on the descent of Pebble Hill.
According to the late, great, Sheldon Brown ( see his website for information about everything to do with cycling), this is caused by lateral oscillation of the head tube on fast descents. The higher the saddle and the longer the frame, the more likely is a shimmy and I was descending with all brakes on at 30mph. Luckily, releasing the front brake and the road levelling out after the 16% section cured the problem but makes me reluctant to descend that particular hill in future.
After a brisk ride along the lanes to Horsham in bright sunshine and a snack at Wetherspoons I then discovered I had a rear tyre puncture as we set off. Intending to catch up, I mended the flat in good time, only to discover I had put the old, damaged inner tube back in! Morale took a tumble at this point and I slunk back 300 yards to a new bike shop we had just passed, where an efficient mechanic changed the tube in even quicker time while I watched the TDF on their TV.
I then decided to return home via Leatherhead, and stopped off for another snack at Bike Beans cafe in Ashstead.
In the end I did 63 miles, and had a good ride back without incident as the temperature topped 28c.
Thanks to Tony and the others. Three lessons in one ride.
Harry
Posted by Unknown at 07:10 No comments:

Saturday ride to the coast on the 19th July

Eight cyclists left Nonsuch Park on an overcast morning but the weather improved as we continued our journey. We stopped at Wetherspoons in Horsham for elevenies, as we left Robin who had overslept caught us up!
Unfortunately Harry got a puncture in Horsham and we agreed to leave him behind.
We arrived in Worthing with the sun shining where we stopped for lunch on the seafront, three cycled back home, three took the train and Robin stayed for the week-end. The newcomer Kevin cycled on to Bognor.
We all enjoyed a good day out (including Harry) I hope.

Tony Hooker
Posted by Unknown at 11:55 No comments:

Cliff and Maureen together with Lynda, Anna, Paul and David Aylett left Nonsuch Park to ride to Pyrford Lock. Despite initially intending to go via Send a joint decision was made to go the usual way via Claygate and Wisley Village. David opted to leave us at Epsom to return for a family party.

Coffee was taken at Carluccios in Cobham and lunch at The Anchor where the food was good, and efficiently and quickly served despite being very busy.
We returned by way of the local WW2 airstrip and took tea at Stoke D'Abernon.
Having ridden 41 miles, more by Paul 50 plus, we just managed to miss the heavy rain downpour.

Cliff and Maureen
Posted by Unknown at 09:50 No comments:

A hot sunny day for once saw a good size group gather at Nonsuch with one new rider joining in. Due to Nigel still being off his bike and Lynda being away, there was a temporary leader shortage for the longer ride to Kingston until Alice agreed to lead her first ride.
I led the ride to Telegraph Track with Dawn as a volunteer back marker and eight other riders. David, Colin and Shirley kept back to help the new woman rider who had come with a folding bike. She did not make it to the cafe at Woodcote, but later made it back to Nonsuch. There is no real reason why a folding bike is not suitable for the beginners short ride, providing it is the right size to start with. Most riders however, seem to prefer bikes with larger wheels. They should be easier to ride on tracks.
The cafe at Woodcote was in full swing, particularly at the ice cream counter, and after we all left Colin rejoined the group having wandered around the Garden Centre trying to find us. The skies above the downs at Woodcote were full of  Swallows and Housemartins feeding on insect swarms and the air temperature had risen to 26C for the short grind up The Warren road.
Reaching the Brighton road junction with Downsway/Crossway several riders near the back mistakenly took the wrong turn behind Dawn and Christine who were actually going home. No one can get lost in this area where so many live and we were all back together at the end in Nonsuch.
On my return home I met the longer ride riders returning from Richmond Park  in Worcester Park and later that evening there was a torrential downpour as the hot weather broke.
Thanks to Alice for leading the longer ride and Dawn for being my back marker.

More experienced riders are needed to volunteer to lead and act as helpers on our rides. David has guidelines to follow and Colin and Shirley provide excellent route guides. It is also a great way of getting to know the area and other people in the group. Just speak to any of us if you think you are willing to give this a try.

All day ride on Saturday 19th

Green Lane has been resurfaced at last.

Green Lane is a path between Lower Morden Lane and Worcester Park which goes past the Merton and Sutton Cemetery, the Green Lane Riding Stables and a new private Housing complex with New England style houses, to come out by the station in Worcester Park. It has always been a potential way to avoid the A24 going north to South and is part of the short ride route to Morden Hall from Nonsuch, but has been in such poor repair that it was usually avoided altogether by a tedious detour through Joseph Hood playing fields and Morden Cemetery.
The resurfacing is a massive improvement, although the short section outside the Primary School still resembles a World War One battlefield. This stretch is in the Royal Borough of Kingston, not Merton. Joined up action is therefore still required. 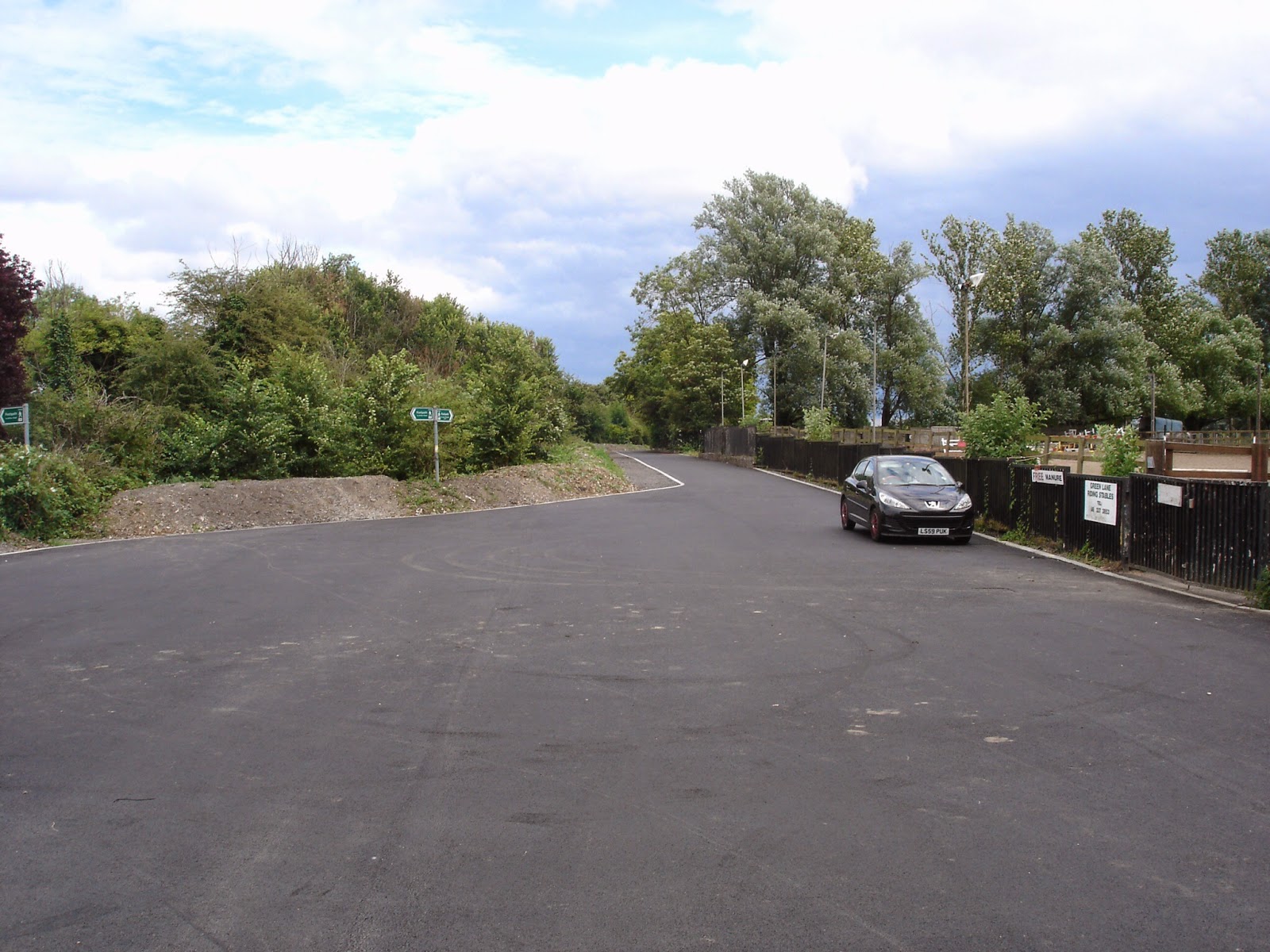 Ride to Hampton Court on Saturday the 5th July

Lynda led 12 riders on this ride. The sky threatened showers but most were prepared for these except Carolyn who had forgotten headgear. Not unusually for the beginners, there were more women than men on this ride and Lynda led us by a familiar route via Malden Manor, Tolworth and Long Ditton to her favourite cafe, the Five on the Bridge.
As we sat inside, it began to rain and waterproofs were donned for the return. Luckily the rain eased off almost as soon as we started. I left at Surbiton to see the start of the Tour de France on ITV. It was sunny and dry in Yorkshire. Next step ride in July

Please note that the planned ride for Sunday 13 July has been postponed for one week. Cliff will lead a ride on Sunday 20 July to Pyrford lock via Cobham and Send. The return journey after lunch may include a quick visit to Wisley Garden centre and café.
Meet Cliff at 09:50AM just outside the Nonsuch cafeteria for departure at 10AM.
Total cycling distance approx. 40 miles with stops for coffee, lunch and tea.
Posted by Unknown at 11:17 No comments: