The Special One Hundred

Shirley Quemby (one third from the left, in the smartest kit!) with most of the other ninety-nine Cycling UK Women of the Year.
Posted by Paul James at 23:56 No comments: 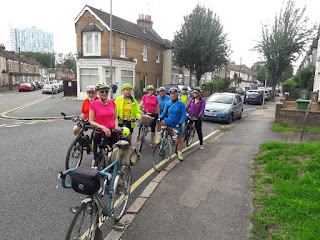 Leader Colin is out of shot, doubling up as photographer on Sutton Green.

There were no beginners as such when we met at Beddington Park on Saturday, merely those who wanted a gentle ride.  The all day rides have recently clashed with Beddington Park Saturday, so those who might have preferred to be on a more adventurous ride proposed Streatham Rookery, with Norbury Hill and Gibsons Hill en route, but the counter-proposal won the day.

It was only as we were on our way along the Wandle to Wimbledon Park that some, who had not been paying attention, started muttering like Muttley about the primitive toilet facilities at our proposed tea and cake venue and leader Colin, diplomatic to the core, offered an early cake at Morden Hall Park.

One was looking forward to the climb up to Wimbledon Common on the way home because one was unaware that the ride had been diverted.  There followed a magical mystery tour of paths once cycled, though not necessarily in that order or that direction, mostly tarmac or hard surface but off road.  Through Prince George's Playing Field, past the Raynes Park Tennis Club, along the edge of Morden Cemetery, alongside Pyl Brook to the Tesco car park at the A217.

As evidenced in the photo, Maggie and Paul rode, with Roger and Anna, Roy, Ray, Sharon and Anne.  We split up at Sutton Green, the Cheamers turning west, the Suttoners staying put, the Wallies going east.  26Km door to door but always nice to be led up only vaguely familiar ways by someone who knows where they are going.

Thanks to our ride leader Steph W for this report, and for a lovely day out along an historic and interesting route.


Six cyclists left Nonsuch Park on Saturday and another 3 joined us at Kingston Bridge. We cut into Bushy Park before heading north to join the tarmac surface of the river Crane towpath. Entering Pevensey Nature Reserve we took an adventurous route through the former Feltham Marshalling Yards and through a tunnel under the railway to follow the Crane onto Hounslow Heath. The path was a little muddy after heavy rain the previous day! It is hoped that rights of way will be granted over this land to enable continuity between the separated bits of the River Crane path.

Shortly we were on a straight route west to the 14th century Tithe Barn at Harmondsworth, passing the proposed site of the 3rd runway on our left at Sipson.

Lunch was enjoyed in the garden of the Five Bells pub. Returning via Osterley Park we stopped for tea, ice creams and cake before returning through Twickenham and Richmond Park.

Thanks to all who came along, and especially back marker Helen and mechanic Godfrey. 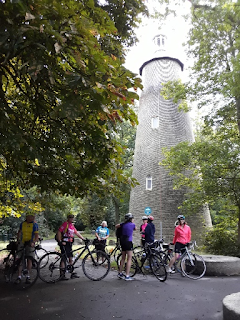 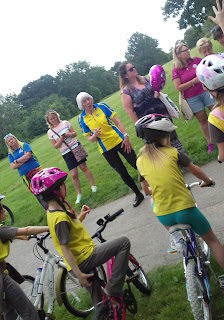 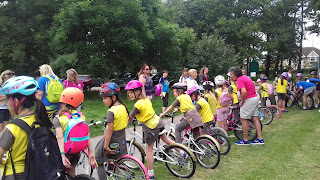 Shirley asked for helpers with an evening ride for a local brownie group...We met at Sparrow Farm gate at about 5.30, some of us did bike checks and then we accompanied small groups of the girls on free rides in different directions all over the park. Each of the groups had two adult helpers, one of our volunteers to lead the ride and the other supporting (these were parent helpers). After the first ten minutes, the brownies took turns to lead the group rides under the watchful eyes of adult helpers. They rose to the challenge and enjoyed deciding for themselves where to take us all.
We all gathered together at Mansion House and then rode back to Sparrow Farm gate to meet the parents and finish around 7 pm. Beautifully organised and great fun for all.

Last of the summer evening rides...

On  Monday, eight of us met for the last Cyclism evening ride of the season.  These leisurely rides are a great way to make the most of the longer evenings from mid-May to the end of July, with friendly company! Many thanks to Shirley (far right) and Colin (2nd right, at the back) who have planned this annual local programme for over 30 years, and to the volunteer ride leaders who make it possible.


We met at Manor Park Sutton on a gloriously sunny evening. Our photo was taken at the top of Cheam recreation ground by a charming lady who longs to join our group, but needs to learn to ride a bicycle soon!  Perhaps we'll see her husband on one of our Saturday rides...


We swung by Mansion House and headed through lovely Nonsuch Park to Sparrow Farm gate.  Steeply downhill through Cuddington Park, we crossed Central Avenue and entered Green Lane just before Worcester Park station.  We turned left after the primary school to take quite a rough path through to Joseph Hood memorial park, waving hello to Saturday regulars Sabina and Bernard on the way through...and took a little footpath on the other side of the field to find our way back through to Green Lane stables .  Here the puncture fairy made herself felt as my back tyre deflated... 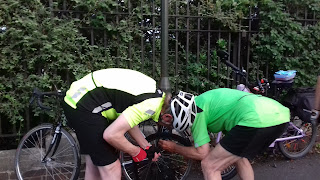 Thanks to Colin and Steve, we were soon on our way again! Though we had to turn on our lights at about 8.45 as the evening drew in...we made our way back to Sutton via Lower Morden Lane, following the cycle route through under the railway line and right into Glastonbury Rd, crossing the Reigate Road into Rosehill Rec and past the Tennis Academy without further incident.


Thanks all for your company, and for all the lovely summer evenings when we've been able to enjoy our local excursions together.

Stephanie will lead an all day ride along the River Crane path to Harmondsworth.  Leaving Nonsuch Park Mansion House café at 9.30, with pickup at Kingston Bridge at 10 am.


Bring snacks, water and dress appropriately for the weather!  We can hope for a sunny and pleasurable day out...