Old Friends and new; Beddington Park Beginners ride to the Rookery, 18 May 2019

Saturday was one of those days you could not be sure of the weather; rain covers or not? Extra layer or not?  Eight of us met for the Beddington Park Ride and though a few familiar faces were missing, like Sharon and Ken, we had a rider new to the club, Stephen.

With no real beginners on the ride we elected to go for a familiar ride up to Streatham Common.

We have all experienced being led through unfamiliar streets, discovering new places we did not know and suddenly emerging and thinking “so THAT’S where we are”, and it is fun to take a new member like Stephen through it.

We took him past Beddington Church and Waddon Ponds, through Waddon Park and the slightly less pleasant bit negotiating West Croydon, through the back streets of Thornton Heath, past St Andrew’s church and the bowling club towards Norbury to cross the London to Brighton railway at Manor Farm Road.  Up the narrow path by Norbury Manor College to Green Lane.

Then for most it was down Green Lane a little and up Gibson’s Hill (one show-off chose to ride up Norbury Hill and back down Covington Way).  The rendezvous was at the foot of the upper part of Gibson’s Hill, which is a bit of a challenge no matter how you look at it; the first part a rough, stony, unmetalled private road on an incline and the second part a narrow tarmac path short (300 yards?) but as steep as almost anything in the Surrey Hills.

The reward is the panoramic view of Croydon and the Shirley Hills from Norwood Grove, which is mentioned in one of Conan Doyle’s Sherlock Holmes stories and which was once owned by one of the founders of the P&O shipping line.  The blue plaque tells you that Mr Nettlefold (of Guest, Keen and Nettlefold) also made it his home in between running steelworks and making the fixings to screw a nation together. 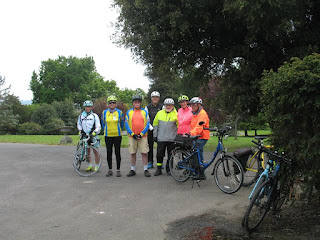 From there it is only a short roller coaster through the woods to coffee and cake at the Rookery Café, where Ray could take Stephen to see The Rookery itself, charming and quaint Victorian gardens and rockery (once a part of the Norwood Grove estate), while the rest of us got on with sampling the impressive array of cakes.

The return trip was downhill in more ways than one, introducing Ray and Stephen to the less than quaint glass, graffiti and litter under the railway bridge in Norbury, to the Saturday driving of all those folks in such a hurry to get back to their homes in suburbia that they overtake on the wrong side of the bollards and suddenly slow to below cycling speed to negotiate the sleeping policemen.  Through Streatham Vale across Northborough Road, where Derek Bentley once lived.  He was infamously hanged at the age of 19 for the murder in Croydon that his accomplice, too young to be hanged, actually committed.  A dark tale from South London's Hobbiton.

From there we went to Mitcham Common, which we crossed on the lane where an Asian man was taking photographs of what we think of as weeds but what in fact are quite delicate blue flowers and where was strolling a large, handsome fox; exactly the same one, I’ll wager, as met me last Saturday around that time in the same spot as I made my way back from the all day Greenwich ride.  Perhaps we’re striking up a relationship, Foxy and I.

The path across Hackbridge Marshes is closed again so we enjoyed a further experience in working class social history, through the architectural and cultural desert that is the Beddington Lane industrial estate on a Saturday afternoon.  I showed Colin the new way through Asda Car Park and the gap in the fence to the car park next door, thus avoiding much of cycle-unfriendly Beddington Lane before the labyrinthine journey past the filling station into the “back door” of Beddington Park, a convoluted route negotiable only with Colin as your guide or if you left a ball of string to mark it on your way out.  A pleasant way to spend the hours before the Cup Final; and the rain held off and the sun blessed us occasionally.

Paul and Maggie, Roger, Anna and Roy are the riders I have not mentioned yet, and we very much hope Stephen comes again.

Ride to Greenwich, Saturday 11th May

Last year we rode via Dulwich and returned via Crystal Palace in cold rain, so I determined to ride the other way via Croydon and avoid any hills. The weather, unfortunately, was beyond control and we had showers from midday onwards with warm sunshine in the intervals. Light wind from the north.

We proceeded via Beddington Park where we picked up Paul James. Through Croydon to South Norwood country park, unknown territory to most, and stopped at Kent House station for a break in warm sunshine. When we left through the station underpass we managed to leave Tony, John and Margaret behind and being instantly out of sight they promptly headed off in the wrong direction. Fortunately, due to modern technology carried by two of the remainder (but not the leader)and a wait under Catford Railway bridge by the S.Circular road out of a prolonged rain shower, we were reunited and by popular vote headed through Blackheath and onto the famous view in Greenwich Park.
Lunch was taken by the statue in a sunny interval at picnic tables and the Observatory cafe, and we left in a heavy rain shower and marked drop in temperature. We briefly stopped by the statue of Peter the Great and a monstrous cruise ship before heading to Deptford.
Return was via Nunhead, Peckham Rye and a tea stop in Dulwich Park with another heavy rain shower to the end in Morden Hall Park in bright sunshine.
10 riders turned out and the distance was 34 miles. No punctures or mechanicals. Thanks to Tony for back marking.

Ride to Greenwich on Saturday 11th May

Starting from the cafe in Morden Hall Park, I plan to ride the Waterlink Way to Greenwich. This means negotiating Croydon to South Norwood Country Park via Beddington Park.
Thence to Greenwich via Blackheath. Last year was wet and cold but we still had a picnic on Greenwich Hill, so let's hope the weather will be better this time around.
We will return via Deptford, Brockley and Nunhead to Dulwich Park for a further stop. Thence to Tooting Common via the back of Brixton and the ride ends in Morden Hall Park.
No big hills, but as it is a largely urban ride expect glass and various shards so bring a spare inner tube. Should be around 25-30 miles.
Posted by Unknown at 09:18 No comments: 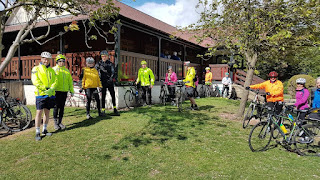 or, I need a beer in a warm pub

Around twenty five keen cyclists turned up on Saturday at Nonsuch and after some debate a sporting Godfrey generously volunteered to lead a longer ride to Wimbledon Park.  Thirteen joined him, including Ruth and Rob on the tandem, and Maggie, Paul, Steve Hobbs, Sharon, Tom, Alice, Helen, Yasmin, Ray Ward and Dee set out in the cold wind.

Our ride was punctuated with rain showers and hail showers, each one calculated to last just as long as it takes for everyone to put on their rainproof, and then the sun would emerge and make it too warm to wear all that clobber!

We nevertheless had a a really enjoyable ride, past Scallywags to the Brook at Worcester Park, up Green Lane and along the path with horses on either side, around Motspur Park Football Club, tantalisingly close to the Earl Beatty.  Up Seaforth Avenue, over the level crossing, through the Raynes Park one way system, up the hill at Durham Road and Cottenham Park Road to the Crooked Billet.

From there along the Common South Side to the Rose and Crown, past the Dog and Fox, left at The Ivy and our reward for that climb, down Church Road, Arthur Road and Home Park Road (wheeee...) to the Wimbledon Park Cafeteria.  Families were pretending to enjoy their day in the park between the hail showers while I had the best Bakewell Tart this side of Matlock (yum) and sampled the worst toilets this side of Afghanistan.  Well, nearly; some of the ladies chose to wait until the temporary cabins at Richmond Park.

The price of downhill and cake was the short, steep climb up Woodspring Road and Princes Way, then under the Tibbet's Corner roundabout to the Telegraph.  Down over Putney Heath to Roehampton, up Danebury Avenue to Roehampton Gate and through Richmond Park, out of Robin Hood Gate and down Robin Hood Way.  Under the A3, past Colliers Wood United Football Club and more or less retracing our tyre tracks from Coombe Lane back to Nonsuch.

Home from there past Ye Olde Red Lion (which isn't old at all), The Moon on the Hill, the Little Windsor, just avoiding the Lord Nelson and passing The May Tree and how I longed to call in The Hope for a pint of its very fine finest.  The place seemed so cosy and welcoming but we were showing Sharon the way home and the clouds were turning indigo again and the temperature falling and she had to go all the way to Purley.  Sigh.

Onward past The Sun, the derelict Fox and Hounds, and The Star (used to be the Lord Melbourne) and home to warmth at last and a bottle of craft ale.

Thanks to Godfrey for stepping in as leader.  Thirty miles all told, our door to door.