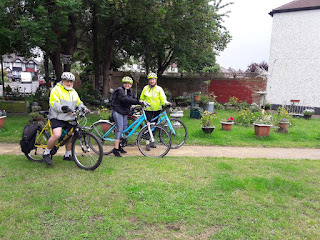 
For the first time in the history of the Beddington Beginners we ran two rides out of Beddington Park on Saturday.

We had a newcomer, Martina, from Bologna and then Durban, who is determined to learn to ride a bike.  She had only been practising in the park until she answered our leaflet and came to see if we could make Maggie’s old bike fit her on the Friday, so Maggie and Colin took her on the Wandle Path towards Morden Hall Park, which has only short stretches of road.  Roger joined them because he could not face the prospect of riding to Banstead, one of his least favourites.

Ken, who lives near Morden Hall Park, and the other electric bikers who refuse to offer us the prospect of entertainment by falling into the river off the narrow path, wanted to go somewhere else, so we did the traditional thing and weighed up the alternatives until the drizzle started, then set off.  I led Ken, Roy, Anna, Ray and Sharon up Demesne Road and through the back streets to Wallington Sainsbury’s, where the drizzle increased to scale two and we changed under the tree cover into our wet weather gear before continuing South of Stafford Road and then across and West of Woodcote Road to Dingwall Road.  Ray left us to go home; whether because of the rain or the beginners’ pace he was too polite to say.  It meant that only Sharon and I noticed the gentle but persistent incline, since the other three were on electrically powered machines.

The drizzle was light and of the refreshing variety as we went down the hill to Woodmansterne Road and then up the Warren and Pine Walk East, the first section of which is probably the steepest of our Sutton hills.  From there it is a brief respite past the Royal Marsden and then a longer climb up Sutton Lane past the prisons, ending with the awkward and fairly steep and busy roundabout across Croydon Lane.  Only one or two more of those carefully engineered London Borough of Sutton drain-potholes to avoid, including the Borough Engineer’s piece de resistance, the one on the apex of the blind bend where the road is at its narrowest, until tea at Pistachio’s, where I took advantage of having less raingear than anybody else except Sharon and moved in early for the last piece of lemon drizzle cake.  There have to be some privileges of leadership.

The rain had stopped when we re-emerged for what, in the days before potholes, was my favourite local stretch, the almost flat, lightly used Woodmansterne Lane along the tops to the Woodman.  Down the steep Carshalton Road, avoiding the metal drain covers strategically placed a couple of yards out from the gutter, re-crossing Croydon lane into Oaks Park where Anna and Roy left the three of us to cross the smallholdings and come back into Wallington on that enjoyable cruise downhill on Boundary Road.  At home the other group returned, Martina rightly pleased with herself for having done something like ten miles on her maiden voyage.

A short ride in the rain; 21.2 Km door to door at 10.6 K/h, but with 239m of ascent it afforded me a bit of sneaky practice for the TriVets on Wednesday and Sharon enjoyed the hills.  For the others, of course, hill practice was a mere flick of the switch.

On a beautiful Saturday we took Maggie’s cousin Pip, hardly unpacked from her twenty four hour flight from the Land of the Long White Cloud, to Nonsuch.  The only obstacles to a splendid day’s riding were a deceptively stiff breeze and a blank space on the rides list for the longer ride.  The numbers clearly called for a split, so with Epsom Downs and anywhere near it ruled out because of  Derby Day, we rejected Caterham on the Hill for the flatter ride to Garson’s Farm, largely to accommodate Rob and Ruth, whose tandem was built by Boeing and exhibiting symptoms of failure.

Thus while Maggie and the jet-lagged Pip on a borrowed bike stayed to ride with Carolyn, who led the shorter ride as per the schedule along the Wandle, Nigel volunteered to lead us to (ever so slightly) more exotic places.  Godfrey rode tail gunner.  Steve, Yasmin, Brian, Ray and Noel joined me and the tandem and the ten of us set out.  Noel had been riding innocently through Merton last week when he was set upon by the group of passing Sou’Westers who made him an offer he could not refuse and here he was again.  We must press gang more.

Either through design or indecision, Nigel led us the zig-zag route out through familiar landmarks; the bridge under the railway at Stoneleigh where the lady of a certain age has been known to enforce the no cycling sign with a swing of her bag; up what in Stravaspeak is the Seaforth Climb to cross under the A3 near Tolworth.  Our only adventure on the way arose because the tandem, like the pretender to the mayorship of Peckham, was sporting a dodgy chain, but when we negotiated the Col du Ditton descent and crossed the Hampton Court Road we could pretend we were having a little adventure away from the peaceful and familiar byways of the Shire.

The Col du Sandown was freshly coated with gravel; piles of the stuff which might be irrelevant to the well-heeled occupants of a Chelsea Tractor but were anything but to a cyclist, and clouds of granite dust.  Zinging through the Lammas Lane downhill and the Garsons Sprint to the eponymous garden centre where the bike parking makes it difficult to secure the wheels as well as the frames; one’s security is in knowing that people thereabouts would not know how to remove a quick release wheel, but would have to send a man to do it for them.

At tea a friendly chap introduced himself as a former rider with the South West London Club, based at Tolworth, but we never found out his name and, uninformed, we made our way back home, the Lammas Lane climb, the Col du Claygate, Red Lane, the Woodstock Lane dash.  On Hook Lane the crowds had come out to see us (no kidding!) as if we were Le Tour.  What they were there for, we did not know.  After Cox Lane, Rob and Ruth paid the tandem toll for having chosen the flatter route, the gates getting increasingly difficult until we all had to lift the machine high above our heads like the natives in Werner Herzog's Fitzcarraldo manhandling the boat through the Amazon forest.

Then it was the Hogsmill riverside and out of the Surrey marchlands to the Ewell by-pass at Stoneleigh and double jeopardy of that eccentric lady at the railway bridge.  After the much travelled Nonsuch Park going East we said our goodbyes and made for home, leaving me alone to break my personal best on the Westmead Road Sprint.