May Bank Holiday weekend in Lincolnshire

67 miles in the baking heat today (sunburn is worse being laid back!).  I just thought I would let you know that it even gets tropical in the North, sometimes. (The vast post Covid crowds were unbelievable, queuing ten deep to get into every pub and restaurant) 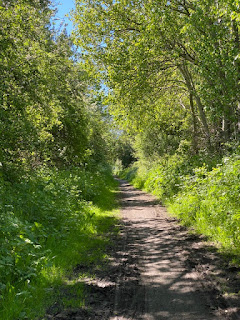 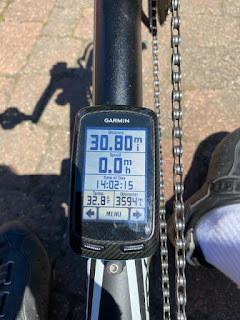 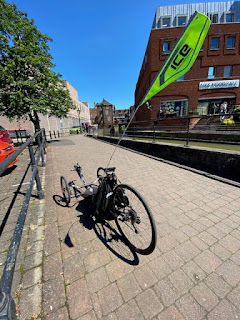 Posted by Margaret James at 00:13 No comments: 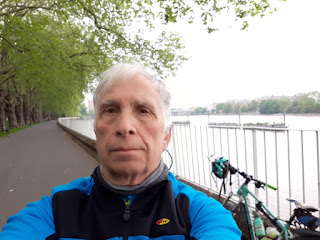 Ray gets up early and cycles to the Thames 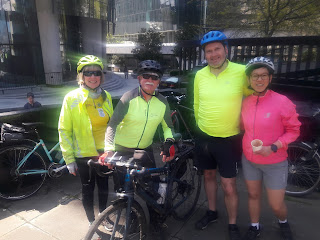 If you have photos to share please let us know.

Posted by Margaret James at 23:49 No comments:

Dinosaurs, cats and dogs; Beginners from Beddington 15 May

The weather on Saturday was almost as bad as the forecast, so we had wondered how many would turn up at Beddington Park for a brand new ride I had concocted; Crystal Palace without the hills!

The plan was to adapt the start of last year's Greenwich ride and approach the Crystal Palace Park from the south and it would have worked a treat were it not for the fact that in the hinterland that lies between Penge and Elmers End you can only cross the tram line at Avenue Road by means of a footbridge and our group was likely to include two electric bikes of the weightier variety.  Maggie and I had spent the best part of Friday cycling around Kent House, not because it it much posher, nor because it has a twee coffee stop, but to search for a Beginner-friendly alternative but none was to be found, so Plan C was put into operation. 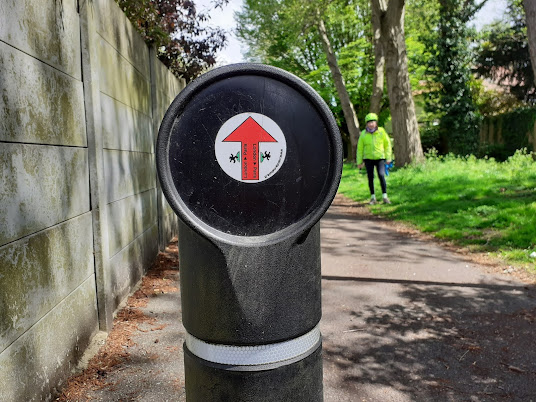 We thought the path led along the trickle that is the Wandle at this point to the industrial estate and the scrapyard, but apparently it is the route to somewhere even more romantic

The rain had abated for the start and as it turned out there were seven of us but Colin's knee is still recovering from his spill, so he opted out of the ride itself.  The route past the ancient church of Beddington and the quasi-cathedral of Croydon went well enough, and Central Croydon was negotiated safely despite buses, motorcycles and tramlines.  The ride along the old Croydon Central railway line is a joy and the suburbs of Addiscombe were pleasant enough.  A little drizzle added interest to the entry to South Norwood Country Park, but like Le Tour if you don't have hills you have to have a section of wet Pave for excitement!

At  Avenue Road, Plan C clicked in to place; Maggie and Roger carried their bikes over the bridge while I led Sharon, Ken and Anna round the block to pass under the railway on the busy and not-too-cycle-friendly Beckenham Road (with the world's most useless cycle lane that comes to an abrupt stop just when you need it) and then the wrong way up one way McKenzie Road (well, it's very wide and we started off on the pavement, but we shan't do it again); and we were waiting, mounted, on the other side of the footbridge before the two who had crossed it.

Penge High Street is the only way under the other two railways, but we survived the short but unpleasant mixture of junctions, uphill and double decker buses into the sunny uplands of Crystal Palace Park, where cakes and coffee at the cafe near the Lower Lake and the famous dinosaur sculptures were excellent; not only that, Maggie had had the foresight to move us to a table with a large parasol and while we supped the heavens opened and everybody but the leader (whom Maggie had carefully seated to the windward) stayed dry. 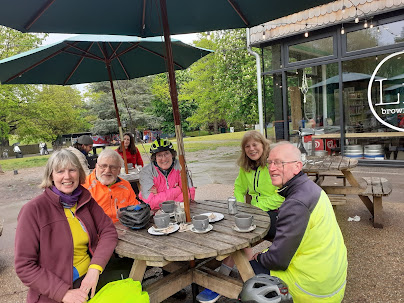 You can't have a trip to that park completely devoid of hills, so we climbed past the Athletics Arena, where nearly a quarter a century ago saw Don Quarry, powerful and magnificent in gold lame kit, break the 200 metre record but which since the 2012 Olympics has become a bit of a white elephant, to Crystal Palace station and zipped down Anerley Hill a bit and a further gentle climb before we enjoyed the long, downhill sweep that is Auckland Road.  Along Holmesdale past Selhurst Park football ground through Thornton Heath (where, sadly they have removed my favourite road sign which used to say "Crystal Palace 2, Dulwich 4"), through the maze of back streets that is the cycle route through West Croydon.  We all smugly agreed that we had done brilliantly to dodge the weather, when the skies became ominously dark.  Out of the indigo quilt hovering above us tumbled cats and dogs and in the last mile home we got as dripping wet as it is possible to get outside a swimming pool.

Still, it had been a good ride; a success, even and next time hopefully with the rules relaxed we can take a fit-again Colin along as seventh man.

A Brompton oratory; Beginners from Nonsuch, 15 May

At last out again with CTC SW London, so good to be back to group riding although I was still on the Brompton. Nigel lead us to Wimbledon Mill cafe from Nonsuch where the queue for coffee was reasonable as it was for ice creams, but a bacon and egg bap took forever. The heavens opened so the other five waited under the shelter of a tree, whilst I quickly devoured the egg and bacon. 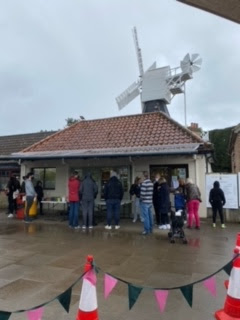 Sunlight reappeared and we dried off through Richmond Park, at one point me taking off behind a racer passing us, (still on the Brompton), and much to his surprise he found me right there and ready to pass him, after half a mile or so, before I dropped back and more sedately rejoined our group lead by Nigel.
(Why is it everyone expects Bromptons to be slow - I have been in the Brompton World Championships at least four times and its never slow!)
So we continued on, including heading down the A3 (well, cycle path alongside) from Robin Hood Gate before turning into suburbia once more including through The Hamptons and Worcester Park.
Unfortunately the heavens opened once more, this time with thunder and lightning but rather than turning sensibly right into Sainsbury’s for a spot of dry shopping, Nigel sped on and the rest of us followed. I peeled off on the Sutton bypass to head for home and a warm bath (not the first of our group to do so) and think now I have just about “dehydrated”. Had to pour the water out of the Brompton bag though!
Thanks to Nigel for leading the ride.
Posted by Paul James at 04:48 No comments:

Wind, rain and a couple of hills; Steph's All Day ride to East Horsley, 8 May

First of all thanks to all who put forward their names for the ride.  32 in total .  Also to  subleaders , a couple of whom were volunteering to lead for the Sat all day ride for the first time.  In the end the weather blew away half our potential and on the day 17 riders were out on the road.

The rain was not too heavy and over by midday but the wind combined with rain as we climbed up Epsom Downs and continued across the top was a real challenge slowing our pace considerably.  After a coffee stop and the reviving descent of Box Hill the beautiful route through the Vineyard and the joy of the ups and downs across the top of Ranmore were enjoyed by all. 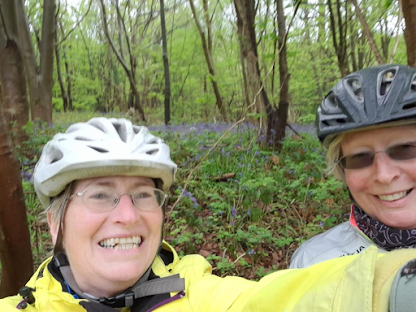 The Bluebell girls; Steph & Carolyn on Ranmore Common
A downhill run after lunch taking in the pretty shortcut through Downside and the usual pleasures of Ashtead Common brought the day to a close.
Steph
Would you believe that with a morning of heavy rain and blustery winds forecast, some people would look out of their windows and decide against riding!  The rain was not too bad but by the time we got to Nonsuch my group of six had become three, so Tony's group and mine merged and we had six again. 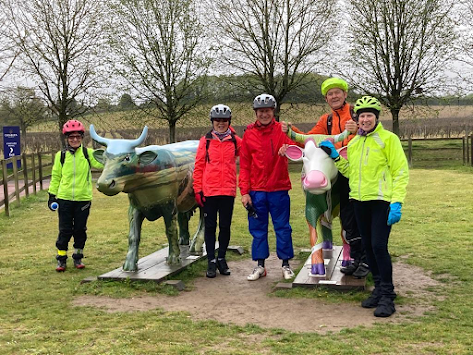 Denbies.  Ann, Kasumi, John, Tony, Maggie; Paul took the pic.
I led to Denbie's and Tony took over because he said he knew a better route to lunch at the Duke of Wellington; this turned out to be an additional hill; Chalk Lane!  Really pleasant countryside, though.  Lunch was not inexpensive but very nice, even if the grotto in which my group took shelter felt more like an ice house!
Tony was keen to get home, I think, even though the rain had stopped and we sailed past the Patisserie and Squires at Stoke d'Abernon without so much as a rueful glance; there was no way we were going home without a cup of tea so Maggie and I peeled off at Woodlands Park on the road to Leatherhead, where they have a pleasant cafe.
Splendid ride, Steph, and well worth the effort of climbing up to Epsom Downs in the face of a fierce headwind.
Paul
Posted by Paul James at 00:40 No comments: