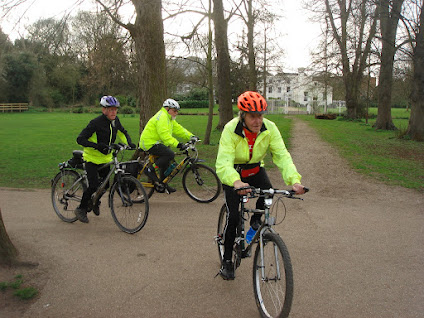 Those of you who were regulars at Beddington Park Beginners a few years back may well remember Brian Moore, Mancunian returned from many years' working in the USA, where he was an accomplished mountain biker.

During his time riding with us he sadly and slowly developed dementia and Maggie and sometimes Paul, and Roger and Anna, would go and pick him up from his home in Croydon and take him home when the ride was finished, with Maggie "minding" him during the ride.

He stopped riding with us when his family moved home to Morden from where it was impracticable, given his deteriorating condition, to collect and deliver him.

There will be no funeral ceremony.  His wife asks us to "raise a cup of tea" to his memory.

Posted by Margaret James at 13:07 No comments:

If you go down to the Park today........Beddington Beginners, 18 September

It was Wandle Fortnight and Beddington Park Saturday was ridiculous; traffic jams as dozens of cars vied for limited car parking spaces.  When eventually we fought through the traffic and got to the Pavilion Cafe, we found Colin fit again but nobody with any firm plans about where to go.  There were eight of us, including Jackie, a newcomer, who is recovering from injury and preferred a shorter ride than some of the group wanted, so we decided to offer two rides.  The Wandle Trail was to be avoided, given the likely crowds of walkers, so Colin took Jackie and Paul B to Telegraph Track in an effort to rendezvous with the short ride from Nonsuch.  Paul J took Maggie, Ken, Anna and Roger on the (nearly) flat route to Crystal Palace.

To get to Crystal Palace we went at a leisurely pace along the start of this year's Greenwich ride as far as South Norwood Country Park.  Then, cutting north for Crystal Palace Park, we avoided the mistake we made last time and on this occasion religiously obeyed the traffic flow laws. 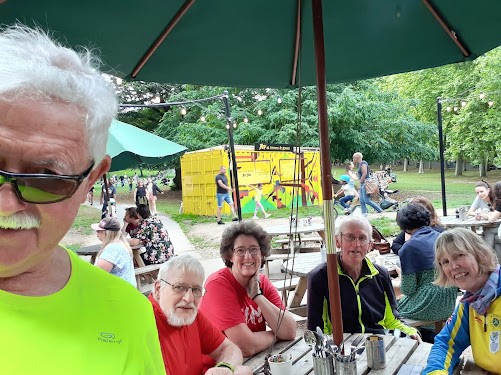 We had good coffee and tea and excellent cake at Brown and Greens near the "Dinosaur Playground".  The dinosaurs are stock still in the day but if you come down to the park at night, you're sure of a big surprise.  Eventually we had to remount and go home, past Selhurst Park football ground and through West Croydon.
No near-misses with vehicles, no rain, cycling legally up one way streets, the ride was a triumph and everyone enjoyed it, or at least told the leader they did, so that he would lead again.
Written by Paul J
Posted by Margaret James at 10:03 No comments:

All Day Ride on 9th October

Roll up, roll up!

Last All Day Ride of the year

A Picnic at Bedfont Lakes

Leaving Nonsuch at 10am, coffee at Bushy Park, picnic lunch at Bedfont Lakes (where there are toilet facilities but no cafe), afternoon tea at Walton-on-Thames 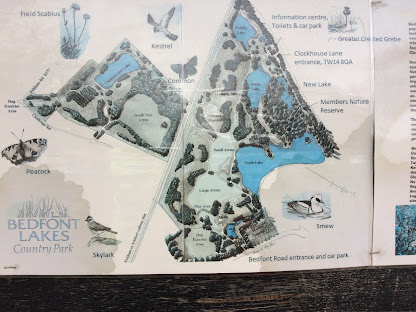 artwork by Tony
Posted by Margaret James at 12:48 No comments:

Twenty cyclists in two groups left Nonsuch Mansion House, the first led by Karen, making our way up, and I mean up, over Epsom Downs to Walton on the Hill for a well deserved coffee. it was good to have a chat to Pete Beyer.  Ann & Tony left us for pre-arranged commitments and we made our way down the Pebble Coombe hill. Kasumi said she will not forget her first descent of that steep hill.

We cycled into Brockham turning left into the quiet Wheelers Lane to Leigh and eventually Parkgate for an enjoyable lunch sitting outside at the Surrey Oaks. Unfortunately a few had to wait some time for their meals to be served. We continued down Henfold and right into Red Lane, left into Roothill and the Coach Road to Leatherhead for Tea.

Just as we were leaving Colin and six cyclists arrived after the annual churches ride.  We peeled off to make our separate ways home. Approaching Epsom Helen's chain came off and got caught between the frame and sprocket, Steph and Helen tried and tried to fix it, with minutes to spare before closing Helen walked to Fudges Cycles where it was fixed quickly free of charge.

A special thanks to my sub leader Karen, and Steph and Maggie our backmarkers.  Thank you all for your good company and an enjoyable day out. 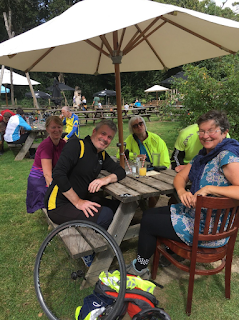 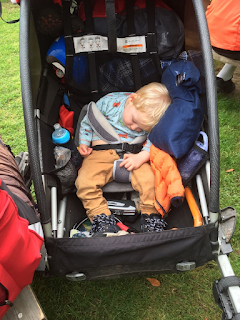 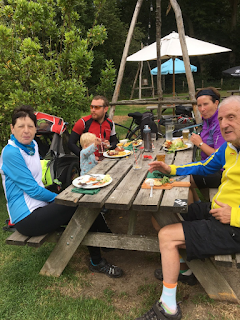 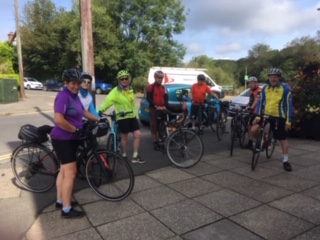 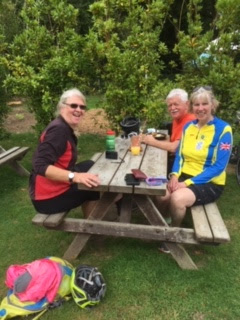 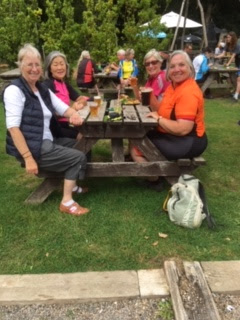 Languishing in Lincolnshire and an Eyre in Notts

Report from the East Midlands by Ian Prince
Having joined the East Midlands DA committee, it seemed only right that I also participated in their August Bank Holiday ride to Nottinghamshire from Lincoln at the invite of their Chair, Tim who came West from Louth in Lincolnshire.
A late start by me meant a car assist was required like some other members not local to Lincoln itself (its a big county!) to arrive in plenty of time at Doddington Hall café, where as expected, the Tricycle Association were also meeting at 10:00am. Being spotted in my Audax UK jersey by a seemingly non cyclist (well he was but was not riding due to injury) brought a quick discussion about the obvious prevenance of the jersey (Margaret Hopper wife of a well known Audax club member and ride organiser used to produce them all for the club). That quickly had me asking for the whereabouts of my long time collaborator, Pete who is a keen trikie, (He and another member still hold an Audax award for doing Paris-Best-Paris 1200k on a recumbent tandem trike some years ago!).
Anyway it was all too soon time to depart, heading out on quieter back roads and making our way through to the village of Saxilby where we briefly stopped to view a lattice bridge over the Roman Fossdyke canal. The canal connected Lindum (Lincoln) with the River Trent.
A Building there from a mere 1908 took my eye though….Branch No. 8 of the Lincoln Equitable Cooperative Industrial Society Ltd. Of course a co-op no more. 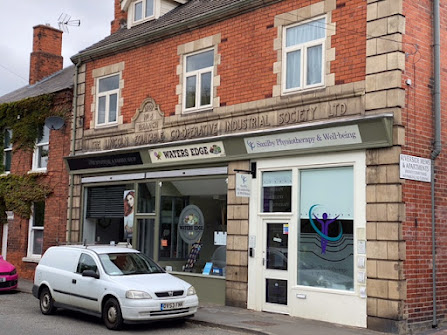 So we headed on to Torksey, a village where the Fossdyke meets the Trent and a brief stop by the canal at Torksey Lock, before heading to the North side of the village and then leaving the road to negotiate a few inappropriately placed Sustrans metal ‘kissing’ gates which required us all to lift the bikes over (and the reason I was not on the recumbent trike),  before we crossed the Trent into Nottinghamshire over a disused railway bridge. I recalled seeing this years ago with no decking in place. One side still is the same but at least the other side is now rideable. 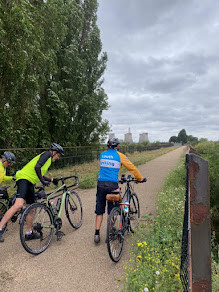 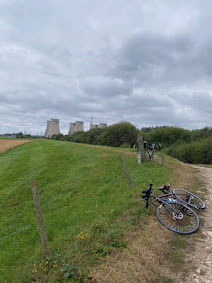 Cottam Power Station, soon to be no more.
Dropping down from the former rail embankment meant another gate and steps to negotiate, before heading along the flood bank and a view of the derelict but private Torksey Castle a scheduled grade I listed building and ancient monument on the East  bank of the River, to Torksey Ferry Road….no more than a rough track nowadays that skirts the South side of the Power Station.
Obviously once upon a time there was a need to cross the River on the level. So we ambled along to eventually regain some proper roads and made our way to the booked lunch stop at the Eyre Arms in Rampton village. 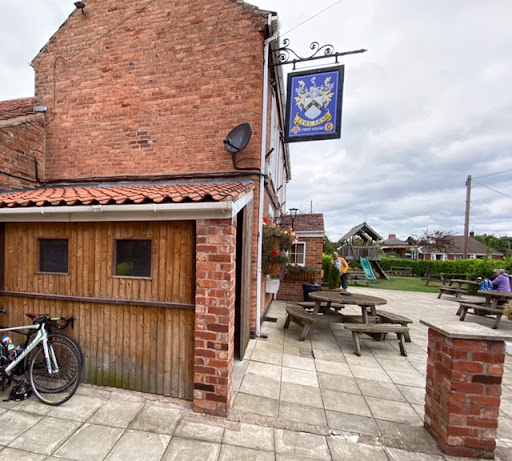 Sunday lunch we knew was the only option and had pre-booked it, being bank holiday, but the ordering revealed they provided it as a carvery, so you could pick between chicken, pork, beef and turkey if you were a carnivore and choose either a large or small portion. The Yorkshire puddings were nevertheless enormous. That plus a pint (either the excellent local ‘Pheasantry Brewery’ bitter or Brains SA all the way from South Wales or a soft drink) all could be had for £10. That’s when you realise you are not in Surrey!
So suitably refreshed and powered up, we followed the minor roads to Laneham, Dunham, Ragnall and eventually to Fledborough, where we were able to make our way down to yet another abandoned railway (this time one that used to run from Mansfield to Lincoln). This is a regular favourite of mine, with ten plus miles of uninterrupted cycle route to Lincoln. So past a now demolished coal fired power station site (High Marnham), to once again cross over the River Trent (no kissing gates this time, just a relic of a railway signal indicating it’s former use). On we went through flat lands of North Clifton and Harby with trees and brambles to either side but more than wide enough for us to ride on two abreast and plenty of bridges where roads still passed above.
Even a sign…..low flying aircraft……(well it was a grass landing strip) on the South side of the route, but we didn’t see the RAF or any 747s passing by. You need to go north to Sheffield / Doncaster Airport for that. A former Vulcan nuclear bomber base, with a runway so long it was an emergency landing strip should it be needed, for the Space Shuttle. It still plays host occasionally to the worlds largest aircraft, the Ukrainian Antonov AN 225 that is now used to fly industrial machinery around the world, but there are very few airports that can accommodate the giant aircraft that makes a 747 look small.
So heading back along the LDECR railway that changed from gravel to tarmac as we crossed the county border, until we neared Lincoln.  We saw many signs aimed at dog walkers to take their mess with them, but no mention of the same for the horse riders though! Just watch your wheels, easier on two than three, I have to say! Eventually we peeled off the track and the short route back on road to Doddington Hall, saw me leave the group who indulged in an afternoon tea, so I believe. My thanks to Tim for the invite and great day out.
Posted by Paul James at 14:21 No comments:

You are invited to join Maureen on an all day 40 mile ride on Saturday 11th September starting at Nonsuch Mansion House at 9.50 & 10.00 to Newdigate.

61/2 miles to Walton on the Hill for coffee,
11 miles to Surrey Oaks for lunch and 12 miles to Leatherhead for tea.
If you would like to join me please email me  maureenkt4@gmail.com  or text me
07773 269 064  by Thursday 9th September.  I will look forward to your company.
Maureen.
Posted by Margaret James at 03:30 No comments: