Phil has been leading Beginners rides for the last 8 years. He joined with his wife who knew Nigel Taylor from work, and he has also done Cycle Training with Merton Council. Leading rides seemed a natural next step, though he has been less available in the last year.
It is important as a leader to see that everyone has a serviceable bike, is wearing a helmet if a complete beginner, and can actually ride their bike. The back marker's job is to keep everyone together.
His favourite cycling destination is Hungary, where a friend runs a company based there. More locally he likes Richmond Park and the towpath between Putney and Kingston.
His favourite bike is a  Claude Butler "Revolution" cyclo cross bike bought in 2010. It is light with 28mm tyres and was a good price at under £400. He also rides a 15 yr old Saracen mtb in the Surrey Hills. Having 4 bikes he tends to go out on the one nearest the front door. 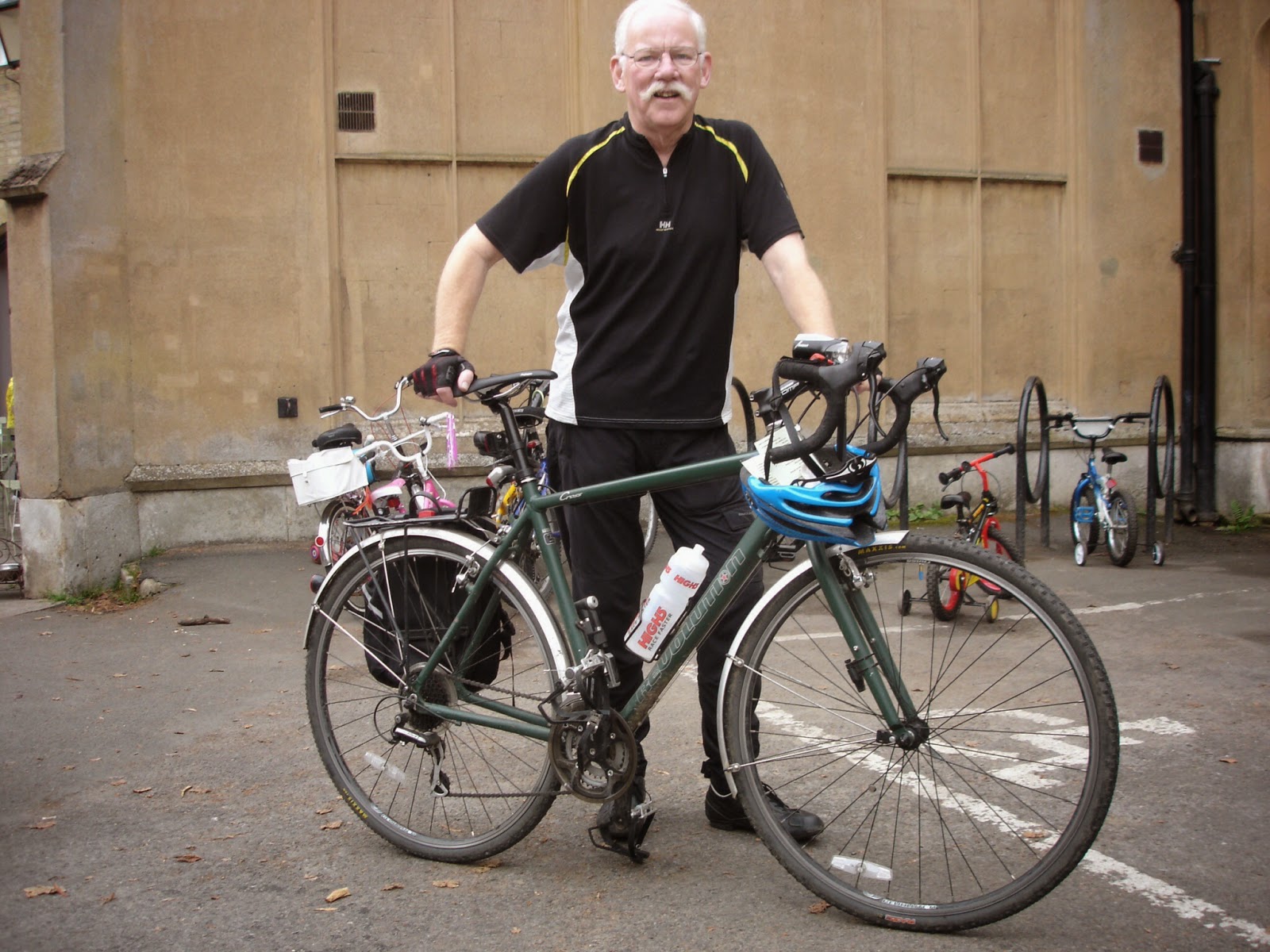 Lynda led a smallish group to Bike Beans Cafe in Ashstead. This ride skirts countryside around the top of Epsom on the way out, and then goes over Ashstead Common on the return leg. There are only two short inclines to speak of, one by Epsom Hospital up Wilmerhatch Lane, and the other by the Wells on Ashstead Common. These are taxing enough for new riders.
The cafe was showing the Women's elite World Champioship Road Race, something to aim at for Beginners. The ride, however, was at a more sedate pace though not slow. The weather was warm for September and cloudy. Autumn has still to arrive. 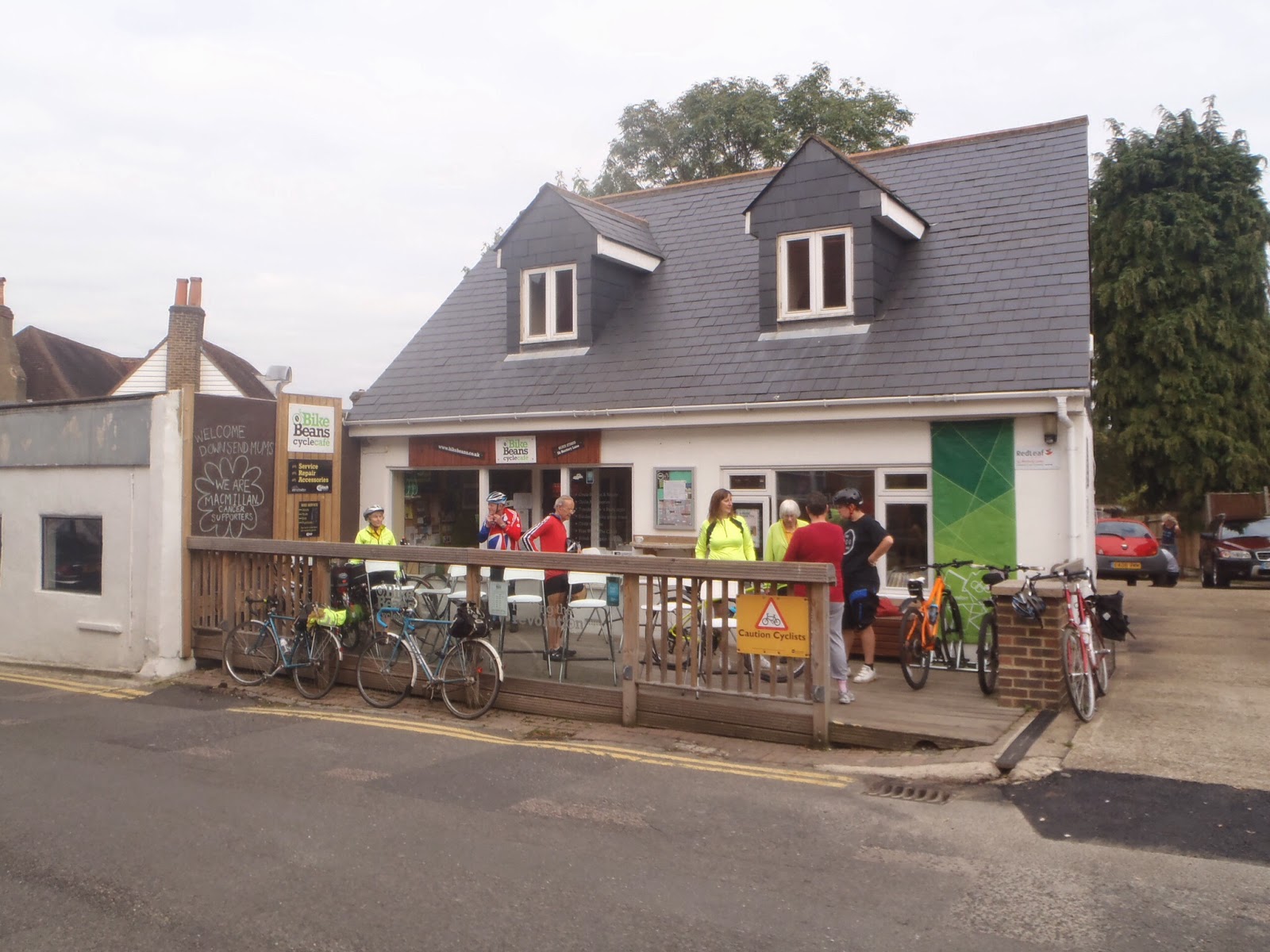 Rivers and Parks ride on the 20th September

This is the coffee stop near Richmond Bridge. A good turnout. 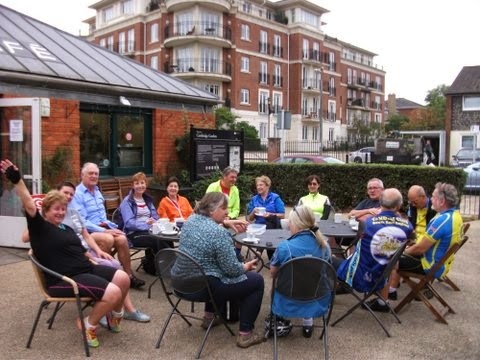 Next step ride on the 28th September

Pat and Mary Ryan had kindly agreed to host this at their home, one which also boosts a small orchard near Ewell East Station. There was excellent food and a good time was had by all, even if it became rather overcast and gloomy as time went on. Many thanks to Pat and Mary. 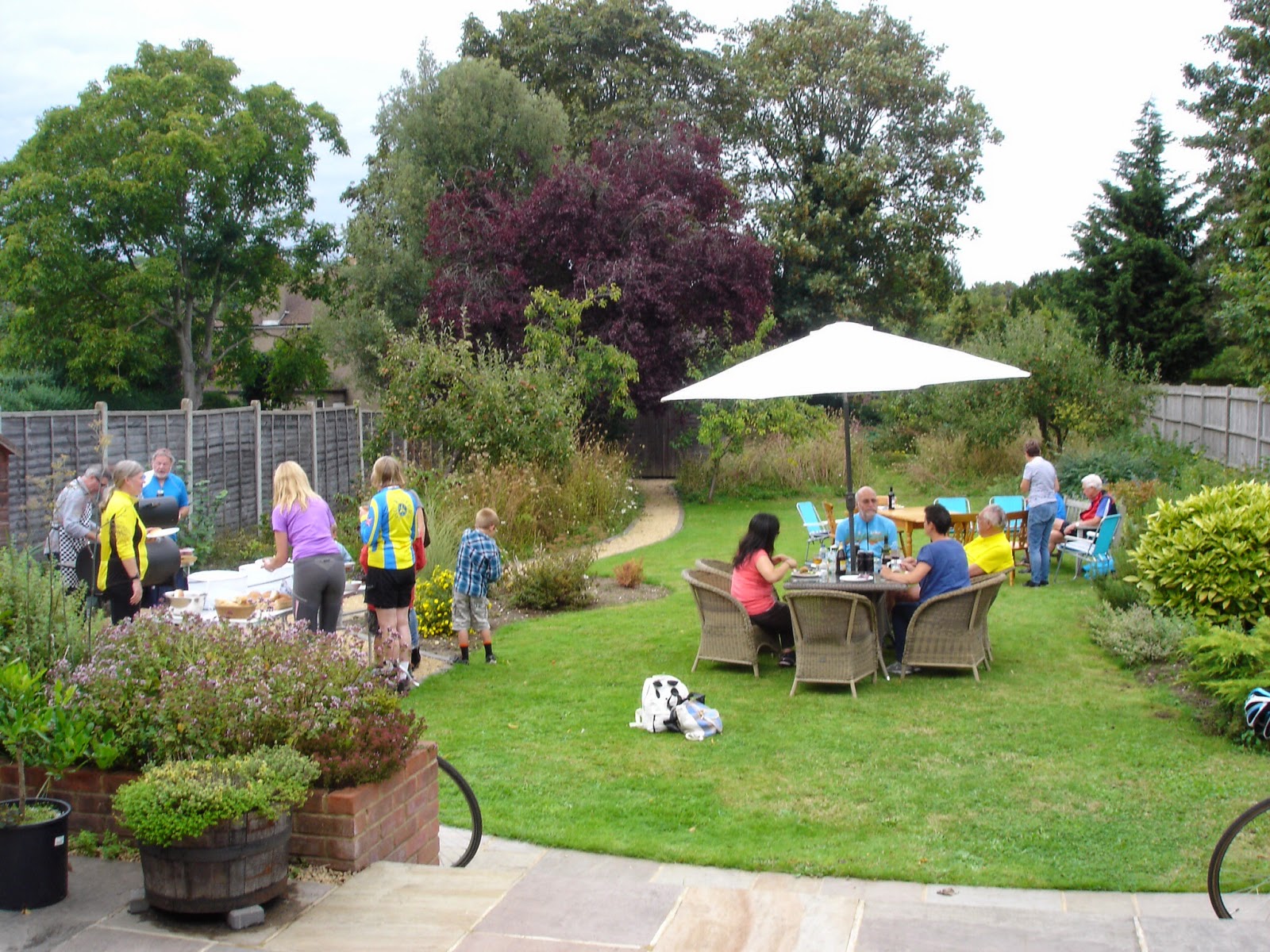 There were 7 riders at the start of this ride, which was a change from the scheduled one to Merton Abbey Mills. It turned out that Sue thought she was on the short ride to Long Ditton and wondered why we were going via Ashstead Common!
I suggested we tried riding as a closed up group to minimise wind resistance which was a new experience for most as more concentration is needed than a looser formation. Anyway, I now realise that for this to have  much purpose there has to be wind and you have to be going a lot faster than 10 mph, but we kept it going up the cycle tracks alongside Horton Country Park until we got to Ashstead Common.
We crossed the Mole at River Lane and went up to Bockett's' via Fetcham, meeting two other riders who had started later  and gone a different route through Leatherhead. Bockett's was strangely quiet, but after a short break we returned via the new cycle track alongside the A24 to Ashstead where we took the back routes to Nescot and Cheam Road.
The new cycle track by the A24 is worth using instead of diverting to the footbridge over the M25, though rather less scenic.
The weather became cloudy and rather gloomy as we finished, some going to the Barbecue at Pat and Mary Ryan's house. The distance was 22 miles. A route map is provided by Gill. 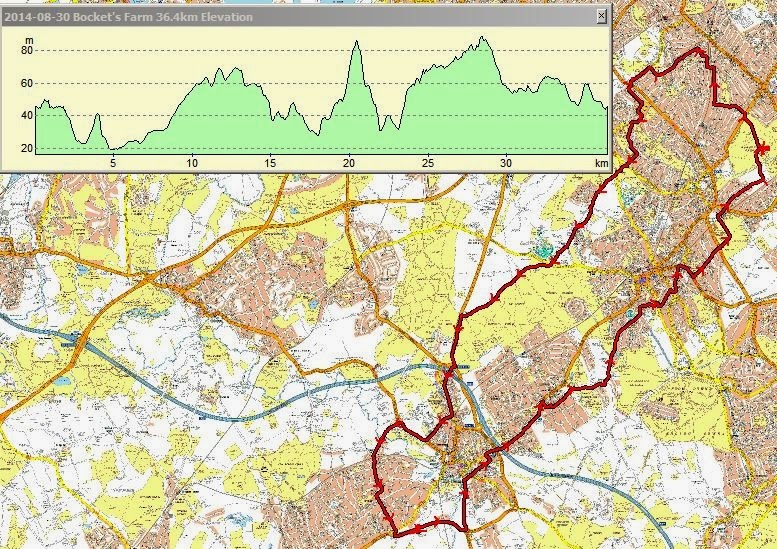