It was Easter Saturday and the sun was shining. Beddington Park was full of families and people trying to park their cars. Colin, Roger, Anna, Roy, Maggie and Paul set off to see the flowers in Coombe Wood Gardens, perhaps some bluebells and rhododendrons.
We left the Park as soon as we could, north of the bridge by the abandoned animal rescue building. This meant three of the group were now in unknown territory though in fact we were on the opposite side of the Wandle only a few feet away from our more familiar route.  We rejoined the usual path to cycle to Mill Lane and across the Purley Way towards Croydon Parish Church. Once through the back streets of central Croydon we cycled through Park Hill Park and out onto  quieter roads eventually stopping in Lloyd Park to enjoy the sunshine. A brief encounter with tree roots which we all managed to stay upright through and we were out of the park.  Then we made our way up Oaks Road to cross briefly onto Coombe Lane before entering Coombe Wood Gardens, where we stopped for refreshments in the Coach House Cafe. Beautiful tulips, fritillary and cowslips adorned the garden beds and a quick reconnoitre in the gardens showed that we were too early for the rhododendrons but a stunning pieris japonica caught our attention. 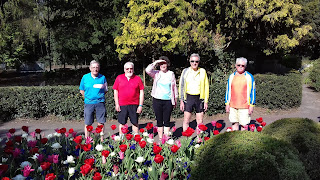 Making our way back we turned left out of the Gardens to cycle along Conduit Lane and entered a wooded area before dropping down Ballards Farm Road to join Croham Road. We cycled through South Croydon and climbed our only steep hill of the day on Haling Park Road. Passing the Purley Way playing fields we crossed Purley Way and made our way through the old Croydon Airport roads. Back now in Wallington we separated on Tharp Road to make our way home.
Posted by Margaret James at 14:20 No comments:

Steve Cook, Mayor of Sutton, and his wife Pauline conduct the Spring launch of CTC Sou'Westers Beginners' 2019 season at Nonsuch Park on 13 April. 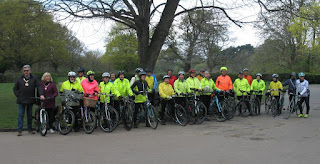 Steve Cook, the Mayor of Sutton, and his wife Pauline rolled up to Nonsuch Park in the mayoral car for the Spring launch.  Thirty riders, no less, turned up for the event on a day on which the temperatures plummeted to 8 degrees, and the Mayor's intention had been to ride with us on the short ride through Horton Park.  Steve was charm itself but Pauline told us he was not very well.  He said he was willing to come out on the bikes of suitable size that Shirley Quemby had found for him and Pauline but was feeling a little dizzy and queasy.  We advised him that riding while dizzy was probably not such a good idea, so after the photos and the launch he went in his car to meet us at tea, planned for the Moat House Garden Centre on Horton Lane.  Pauline said she would ride with us, though she had not ridden for a long time.

The long ride went off to Richmond Park, leaving Colin, Shirley, Nigel, Maggie, me (Paul), Carolyn, Chris, Ron and Ken to escort the lady mayoress on a ride led by Steve Hobbs.  I was at the back and it became evident as we rode along the cracked, badger-undermined path through Nonsuch Park that Pauline was indeed rusty on a bike.  She tried gamely, but her nerve went when two little uncontrolled yapping dogs ran at her, and she confessed at the gate that she would rather go no further.

So we sent the main group off to enjoy their ride while Nigel, Maggie (who had invited the Mayor), Colin and I stayed behind to await the return of the mayoral car.  Bike returned to Colin's safe keeping, Pauline back with her husband in the car, we set off to catch the group.  We had to check a few times on the pre-planned route but as we rode a huge biblical ink black cloud appeared on the horizon and rolled across the sky, in complete opposition to the wind it seemed, and just as we were at the muddy bit in Horton Park where the path turns onto a little hill of slippery gravel, the temperature plummeted another four or five degrees, the cloud came to rest directly above us and we were assailed by a plague of hailstones.

We imagined aloud as we cycled our cheery way through the downpour that the others would be having their tea, listening to the rattle of the hail on the roof, while we were getting stung about the face, but no, another curse had befallen; we caught the main group up because Shirley had fallen off her bike.  Gently, we were assured, almost elegantly (the laws of gravity no longer apply to Shirley!) and she was unhurt.  And we all rode together to tea, where the weather had improved to the point that Colin had his out in the open air.

The Mayor was too poorly to make it to tea, the ride home was relatively comfortable and trouble free, and against all that the fates had to throw at us, Spring had been launched for the Beginners and things must improve!.
Posted by Paul James at 10:57 No comments:

Fifteen riders left Nonsuch Park on a cool and cloudy morning. Our first tea stop was at Squires in Twickenham, and after tea we joined the river Crane at Kneller Gardens then onto a photo stop at the Shot Tower.

The plan was to follow the river as much as possible but some parts were inaccessible or too muddy. Leaving the source of the river we picked up the Grand Union Canal and carried on to Norwood Bridge where we turned off and made for Osterley Park for lunch.

After lunch we took a route to Twickenham then onto the Y.M.C.A. at Ham for tea. Nine riders then left us to make their own way home. Unfortunately there was a private function at the Y.M.C.A. so we carried onto the café at Canbury Gardens. Originally it was a W.C.(!!!) but the café is now run by an Italian family making very good coffee and cakes.

A good day's ride, no problems. Thanks to Helen for back marking. 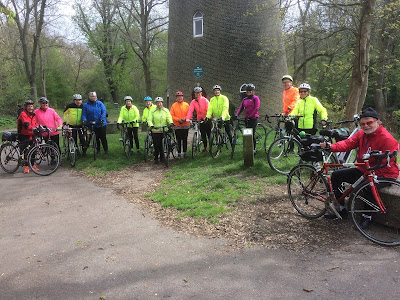 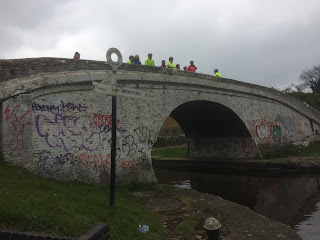 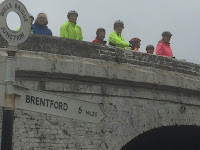 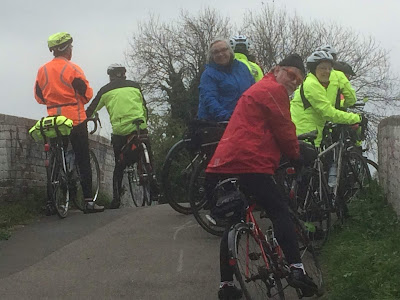