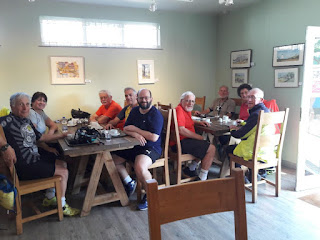 Saturday's ride was a fixture on the Wandle Fortnight calendar and coincided with the Bike Fest at Beddington Park. Our regular cyclists had to be steered away from the static smoothie-making bike! However, Maggie and Ray encouraged John, who had previously cycled with the Wayfarers, to join us on our afternoon jaunt. We also welcomed Alison and Jim, who arrived separately with little or no experience of how to use gears.

We therefore decided on the Wandle Trail for the ''changing gear' beginner's ride. Roger ably supported Ali and Jim was given advice by the rest of the group. So 10 of us left Beddington Park and made our way through Mr Funari's garden at The Hack Bridge, now in use as a playground. As the confidence of our newcomers increased we noticed that Ali's saddle appeared rather low and after our tea stop at Morden Hall Park, Roger set to raising this.

We left the Park and the Wandle trail to ride on quiet roads and test our newcomers on some short hills. The benefit of changing gear was generally quickly learnt and before long Colin was leading us through Morden Park. Ali and back marker Anna were out of sight for a short time but Roger returned to find them readjusting the saddle and to lead them back to the group. We crossed Reigate Avenue and went our separate ways at the other side of the park. Ali and Jim returned to Wallington having successfully cycled 21k. We hope to welcome John, Jim and Ali on future rides.

The morning mini-shower past, the wind not too bad, good cycling weather saw a healthy gathering at Nonsuch Park on Saturday.  The short ride was to Oaks Park, which is one of our shorter ones, so to make up for this Nigel led the longer ride to Cobham, which is just about the furthest we can hope to travel at Beginners' pace while leaving at two and meeting the target for returning in time to get home, have a shower, get an Indian takeaway and watch Strictly.  Especially allowing for all the talking; some people seem to think that Saturday rides are for socializing and enjoyment!

There were some fourteen of us and we used the route past Ewell West and through the path beyond Bakers Field Close.  A few times round the roundabout at Southfield Park so that we could regroup but when we hit Christ Church Road the leader took a cue from some of the group and we went at a fair lick.  Loraine's chain problem was swiftly sorted and we took a traffic-friendly route around Oxshott, up Broomfield Ride past the posh houses and down Steels Lane, and came into Cobham along Stoke Road, arriving for coffee in The Medicine Garden just before they closed.  Sadly, Steve W's message did not get through to the leader quickly enough; he had mistimed his usual last-gasp arrival at Nonsuch and was trying to meet up with us!

Back past Squires at Stoke D'Abernon, along Randalls Road into Leatherhead and home through Ashtead, down the hill behind Epsom Hospital and past Epsom Sainsbury's.

The pace was a little hot for a Beginners ride (my Strava did not break for coffee so I can't be exact) but it was fun and the speed had the advantage of stringing us out along the road so there was room for the traffic to overtake.  Corner-marking was generally good.  There being a considerable difference in pace between the front and the back, especially on hills, Godfrey did brilliantly as the self-appointed back-marker and caused us to think that perhaps one of the rest of us should have volunteered for that task on the way home.

There have been a couple of longer longer rides in recent weeks and at door-to-door 56.6 Km this outdid by a couple of hundred metres Godfrey's own splendid ride to Pilgrims on 6 July, which was conducted at 17.5 kph.  We got back to Nonsuch just before six.
Posted by Paul James at 03:48 No comments:

We are about to launch a new format email newsletter which we hope will allow more people to see more of what we do in the Sou'Westers.Sou'Wester Shorts is an email based digest of Sou'Wester stories - a bit like CycleClips - published every few weeks.   It's not intended to replace the paper Sou'Wester, but to complement it with the ability to have web links and colour pictures.  It's compiled by Paul James, David Vine and Simon Lambourn, and the content comes from our existing blogs - Wayfarers, Beginners and Cheam & Morden,.   So you will have seen some articles on the Beginners blog already, but you may not have seen the C&M or Wayfarers stories.  We have been piloting it with a small audience, and we think it's ready for a full launch.Distribution is handled by Google Groups, which has a list of emails to forward the newsletter to.    When there's a new edition, it gets sent to everyone on the distribution list.   It's simple to unsubscribe (click the link at the bottom of the email) but it seems a bit complicated to enrol at first, so we decided to automatically enrol all the Sou'Westers members.  Of course you can unsubscribe at any time.We are still learning, so we would welcome your feedback, and we hope you will like the new newsletter; Beginners who are not Wayfarers members should receive their first edition in two or three weeks' time.
Posted by Paul James at 12:42 No comments: