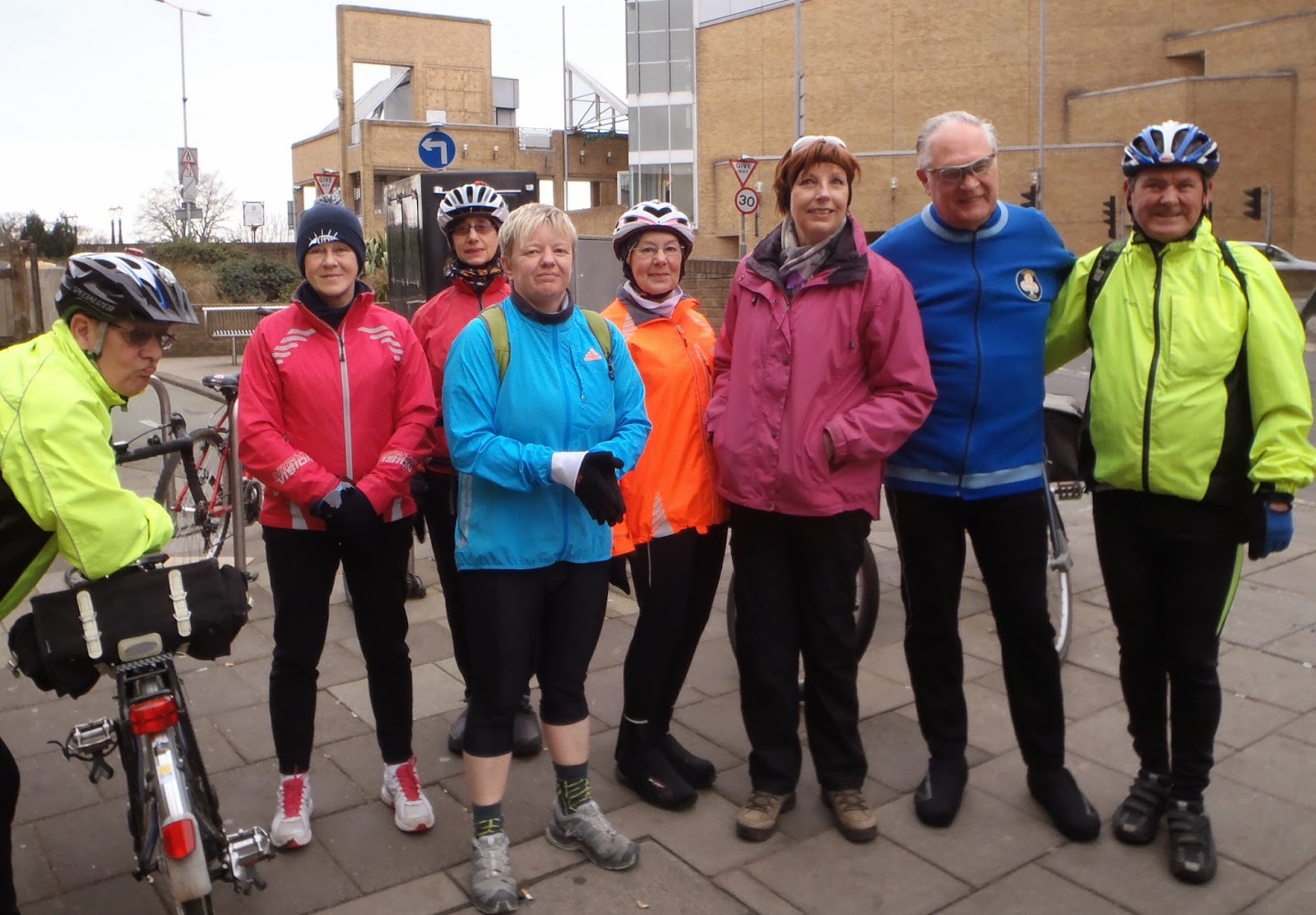 Ride on the 21st March

Despite the gloomy and chilly conditions, eight riders turned up at the start including Toni and Eddie who also did the same ride the previous week. We made good time to the first break at Bedfont Lakes where we had fun negotiating the entry barrier.
After rounding Heathrow and having a quick peek at the Great Barn in Harmondsworth we sped along to Harlington on the straight road with a cold wind coming from the left and turned into Cranford Park. Back through Heston we arrived at Osterley and the cosy cafe.
After lunch we went down the cycle path by the A4, crossed a logjam at Kew Bridge and went down to Chiswick Bridge then into Richmond Park via Sheen. Final separation was at Raynes Park.
This ride was a bit longer than the last at 35 miles. Thanks to David for back marking.
I got some photos on this ride , and I will put them up when I can get my iPad working properly.

All day ride on Saturday the 21st March.

The third Saturday each month is the usual time for an all day ride, so I will beleaving Kingston from outside TKMAX at 10am to ride around Heathrow toOsterley Park.Depending on the weather, we might detour from the planned route toWindsor, otherwise read the blog for the 14th to see the routedetails.Let us hope that the equinox brings better weather than we had last week
Posted by Unknown at 12:28 No comments:

Ride to Osterley Park on the 14th March

After I got the ride dates mixed up, seven riders turned up in Kingston and some early sunshine. With the keen wind behind we fairly sped through Bushey Park and Hanwell to the Bedfont Lakes Country Park, where we had a short stop at the visitor centre. Clouding up by now, we went around the South of Heathrow and its warehouses to the East End of the runway where giant planes were revving up before takeoff. At the Northwest end of the airport a steady stream of giant planes were landing directly overhead. This is quite an experience despite the noise and pollution.
After a short stop in Harmondsworth for a glimpse of the Great Barn it was the long, straight road through Sipson and Harlington dead into the cold wind with the clouds getting darker by the minute.
What felt like a grind took us through the built up area of Heston, and it was a relief to arrive at Osterley and the welcoming sight of a cosy cafe at 1230.
Leaving the cafe was a shock to the system, as if anything, the air temperature had fallen, though by now the wind was behind as we headed towards Richmond Bridge via Isleworth, thence through the Park to Kingston Gate, where the sun reappeared. At the end of the ride by the A3 underpass, the distance was confirmed as exactly 30 miles. Thanks to Toni for back marking and making sure there were no flats or mechanicals. 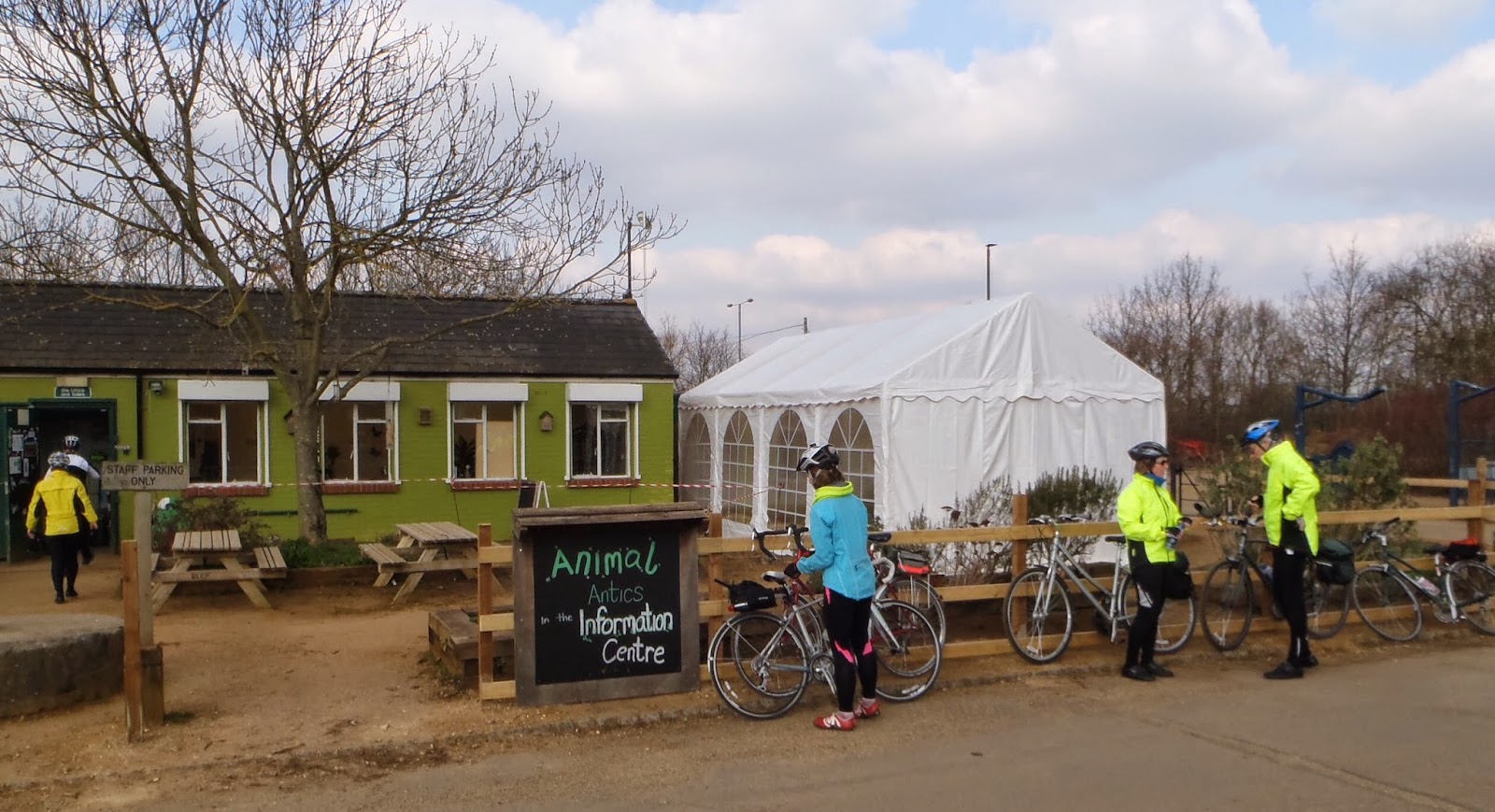 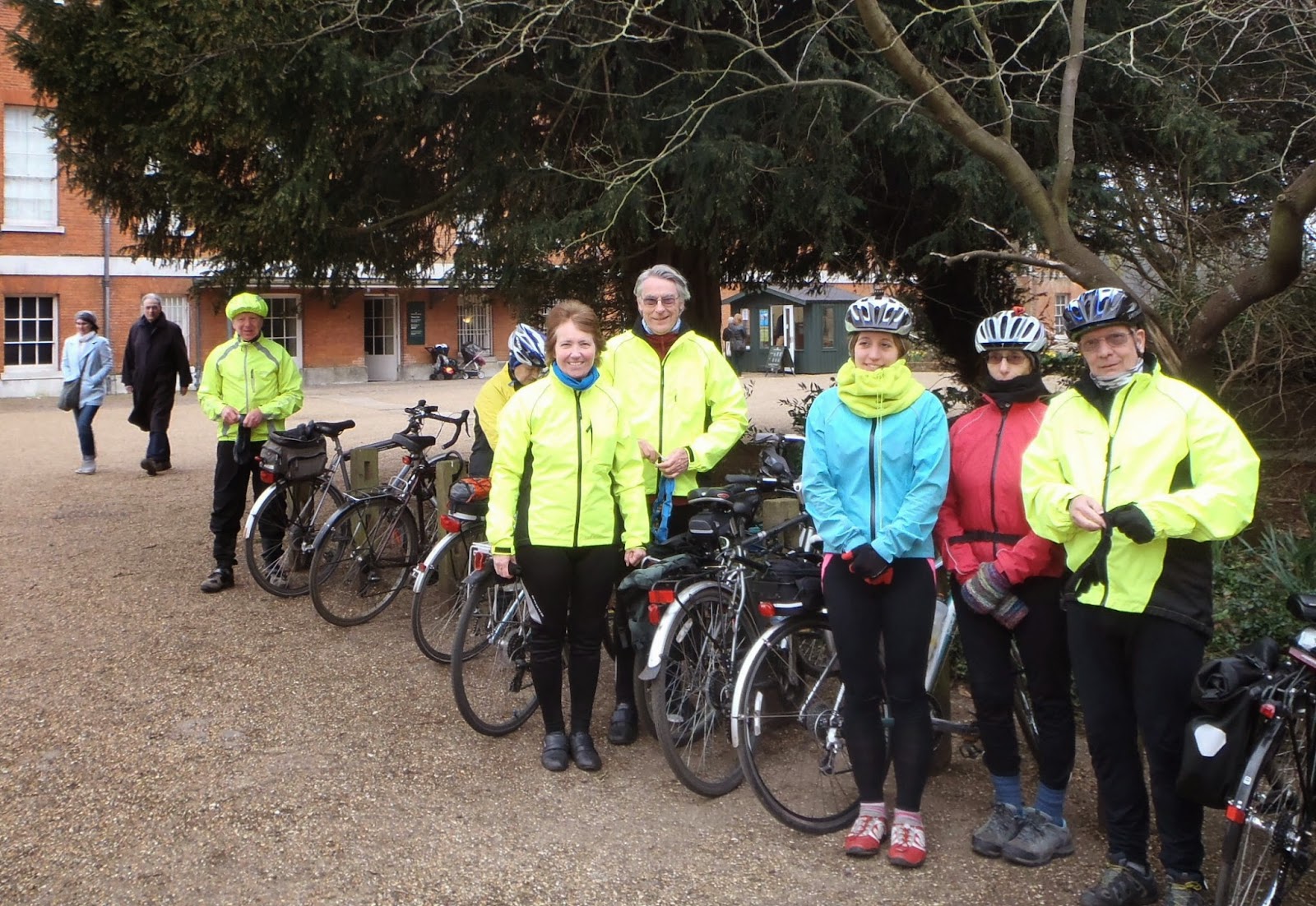 My mistake about the all day ride down for the 21st

Somehow I have got the dates wrong for this month, and I have been reminded the ride is listed in the Sou'wester and on the website as being tomorrow!
So I will be at Kingston Bridge tomorrow the 14th at 10am if anyone has already planned to come, and will also repeat the ride the following Saturday.
Be assured,  it is an interesting ride.
Posted by Unknown at 05:00 No comments:

Saturday the 21st March. All day ride to Osterley Park.

Meet outside TKMAX on Kingston Bridge at 10am. Ride through BushyPark, Bedfont Lakes and round the end of the runway at Heathrow toHarmondsworth. Then through Sipson, Cranford and Heston to OsterleyPark NT cafe.After a break for lunch, through Isleworth, over Richmond Bridge andthrough the Park to New Malden.Distance is about 30 miles with no hills.
Posted by Unknown at 02:29 No comments: