The Mayor and Mayoress of Epsom and Ewell will attend at Nonsuch Mansion at 1.45pm to kick off this season, so please make an effort to attend and be included in the group photo as well as go on the rides afterwards.
A good turnout will reinforce the message about cycling as a leisure activity of choice for a large minority.
Posted by Unknown at 11:16 No comments:

Ride to Downe Village on Saturday the 19th March.

Nine riders turned up at Nonsuch on an overcast, cold, but thankfully almost windless day. Having been dry for several days it also meant that the lanes around Downe were largely free of gravel deposits.
We set off via South Croydon and up to the top of Croham Valley Road, the first real climb of the day, down through Selsdon to Featherbed Lane, a long, steady climb up to the top and the Bear Inn. Along the top to the steep descent to the pretty valley at the bottom of Hesiers Hill where dozens of crows were turning over the chalky ploughed soil for their dinner, not that the next climb up Beddlestead Lane to the summit of the Downs left much energy for contemplating the scenery. A short stretch along Clarkes Lane with views over Kent before the short, but brutal, climb up Church Lane and a stop for a photo in the Churchyard. 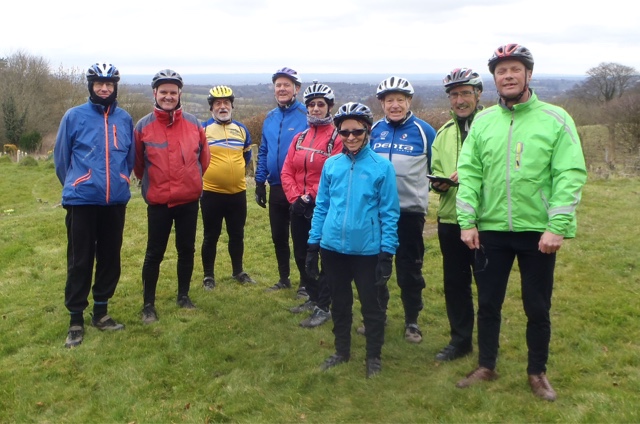 Having promised no more climbs before lunch, I had omitted to mention a deep valley along Rag Hill and a left turn in another deep valley to Jail Lane where, in testimony to bike handling skills, no one shed a chain.
By now a short level stretch to the Queens Head pub in Downe and a log fire was all that remained, and we arrived there after a ride of just over two hours. Service was prompt in a crowded pub and we were on our way within the hour down Jackass Lane with views over to the City and Crystal Palace.
After a longish stretch alongside Addington Road we encountered the final climb of the day up Gravel Hill where we lost David to cramp, thence a long downhill to South Croydon where several peeled off, before the scenic stretch along the Wandle by Waddon Ponds and the end of the ride in Beddington Park.
Thanks to Tony for back marking throughout. The total distance was about 33 miles, but the climbing made it feel like a lot more. Some said they would like to do this ride again in the summer!
Posted by Unknown at 09:17 No comments:

All day ride on March 19th to Downe Village, Kent.

This ride will leave from Nonsuch Park Mansion at 10am and ride via South Croydon and Selsdon to the top of the North Downs at Titsey Hill. Then via Westerham to Downe Village for a lunch stop.
The return will be via Shirley village to South Croydon,  Beddington Park, and Carshalton.
This will be a hilly ride to stretch those early season legs and hopefully there will be good views from the top of the North Downs. Last time we did this the tops were shrouded in low cloud so bring lights.
Some of the road surfaces in the smaller lanes are indifferent and gravelly if there is any rain, but easily rideable on a road bike.
Total distance will be 35-40 miles and I aim to be back by 4pm.
Posted by Unknown at 08:02 No comments:

Are you over 50 and wondering what sort of challenge on the bike you need for 2016? One possibility is to go for a distance target with a group who ride around your standard without having to go too far to the start. June 15th is the day.

Tri-ennial Veterans' rides have been organised by CTC groups since 1928, and are intended as a sociable, non-competitive day out in the Surrey countryside. We are offering three distances: 100 miles, 100km and 50km. All routes are figures of eight around the base at Brockham, with light refreshments at lunch and at the end of the ride. A CTC badge is available at a cost of £4 to riders over 50 who complete the 100 mile route in under twelve hours. All riders will receive a finisher's certificate.
The number of riders is limited to 80: please register with Simon Lambourn. The entry fee of £5 covers costs, including refreshments at the base.
Details of how to enter, and the routes on offer are on the SWLondon DA blog. I hear that places are filling up fast, so register your interest before too late.
Posted by Unknown at 03:02 No comments: