Beddington Park on Saturday was not as chaotic as Nonsuch Park has been.  Eight of us were there at the appointed hour including newcomer Terri and Ann, returning after the Lockdown.  Ray was there, too; he had come on a ride last week after being in isolation but had not met in the park for four months.  Streatham Common has acquired a reputation for overcrowding and involves a get-off-and-push hill for genuine beginners, so we decided that a short ride to Coombe Wood was probably sensible; we split into two groups of four, Colin taking Terri, Ann and Sharon.  I agreed to give him five minutes and follow on with Maggie, Ken and Ray.  Colin felt that five minutes was not enough, and he proved right.  In fact, he got nearly ten minutes because Roger and Anna turned up a few minutes late with tales of rebuilding gear assemblies.

The route includes the cycle lanes through central Croydon, which are a bit scary for the inexperienced but on which the traffic is usually light even if the trams are noisy and the buses are big.  Weekend traffic is still lighter than before the plague, but there was some indecisive driving and parking to make up for the lack of quantity, and the button on the pedestrian lights crossing the busy Fairfield Road had caught the virus.

Despite the best efforts of the back-up leader to cycle slowly, we first caught sight of Colin on Park Hill Rise, and had to wait a few times at a respectful distance in the posh roads north of Lloyd Park to avoid becoming a group of ten.  While waiting, we saw two aeroplanes in the sky at once, a rare sight indeed.

The cafe in Coombe Wood was welcoming, though the only toilet open was the disabled one and the social distancing indoors is difficult; we had resolved to take our refreshments to benches in the gardens but in the event there were two outdoor tables free. 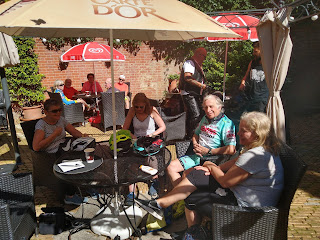 Coming home the split in the groups worked better, because we could just linger in the cafe a bit longer before going through the woods and taking the gentler of the two descents from the farm road.  Thanks are due to an understanding bus driver where we had to turn right on the Brighton Road.

We caught up with the first group again, this time at the top of the Haling Park Road climb, which is where people begin to think about making their own way home, and they waved us past.  A bit short of 20Km at a gentle 11.7 Km/h.  I said we tried hard not to catch them up!  Welcome, Terri, I hope you come again.
Posted by Paul James at 02:23 No comments:

Details for a ride to Osterley Park planned for 8th August

Tony Hooker has planned a ride to Osterley Park for 8th August.
As detailed in the Rides List departure from the Nonsuch Café is scheduled for 10.00am. This is usually a well attended day out so please let Tony know in advance that you are intending to join the ride. For this please phone him on 020 8337 9736 or send him an email, to tonyhooker1@aol.com.
Two additional leaders have volunteered their services which means that there is currently capacity for 18 riders in three groups of six. Tony would welcome another volunteer to lead if a larger number of riders seems likely.
~ Tim
Posted by Tim C at 08:08 No comments:

Auld acquaintance; a Beginners group of six on 11 July

Ray Ward and his wife Chris were in isolation for four months, going on virtual hikes around the pyramids and cycling the tandem around the garden.  So when Ray expressed an interest in trying group riding again Maggie put together a group of us loath to go to Nonsuch Park because of the general public flocking in their masses.  Among other things, it appears that nowadays you can get a licence to drive a big car without having to learn how to manoeuvre or park it, and if you do, the best place to practice your technique is - you've guessed it - the Cheam end of Nonsuch Park on a Saturday where everybody else who lives within walking distance of the place is doing the same. 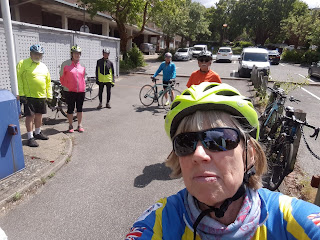 Maggie is a better selfie-taker than me (see below)

So Ray came to meet with Ken, Anna, Roger, Maggie and I at the Sutton library car park, where there were no vehicles and we were the only six people.  Maggie had mooted our favourite ride up Farthing Down but this met with general disapproval; apparently it involves a hill.  We were asked, what was the attraction?  (Answer, nice ride, nice views, and we know a coffee shop and a clean toilet).  No matter; instead we went towards Dorking where the B Group had discovered on Wednesday that the toilets next to Rykas were open, so off we set.

It was comfortable weather for riding; a risk of rain that never really materialised.  So we followed the wheel tracks of many before us through Ashtead and Leatherhead and along the cycle path alongside the A24.  We got a little strung out on the hospital hill in Epsom and when we regathered at the top it appears that tail-end Charlotte and the back marker had seen Colin and taken evasive action to prevent two Saturday groups intermingling.  On arrival at Rykas who should be sitting at a table all on his lonesome but Godfrey; what a pleasant surprise!  We retraced our steps to the River Mole and from there took the Ashtead Common route home (via Roger's picturesque route), and who should we meet just south of Leatherhead but Terry. 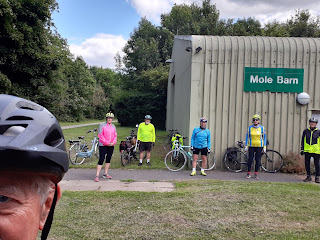 One eye only on the ball!  Five and a half of us by the largest home for small mammals in Surrey

It's a small world, SW London and Surrey on a bike of a Saturday afternoon.  A splendid time was had by all.  Me, door to door, 55.46 Km, 363 metres of climbing, a cup of tea and a whole flapjack.

I'm delighted to tell you that Lynda Barrow has been selected as one of Cycling UK's 100 Women in Cycling. This has just been announced as part of the Women's Festival of Cycling.

Recently we re-published a profile of Lynda from 2002, when she was fairly new to the Sou'Westers and to regular cycling. Since then Lynda has been a huge support to the club, organising the first printed club shirts, a regular rider with the Beginners and the Wayfarers' Easy Riders section, and in fact almost single-handedly keeping the Easy Riders section going for several years when it seemed Lynda was leading nearly every week.

Here is the announcement https://www.cyclinguk.org/womensfestival/100women/2020.

Congratulations, Lynda!
Posted by Paul James at 09:15 No comments: